This article was written by Bill Lamb 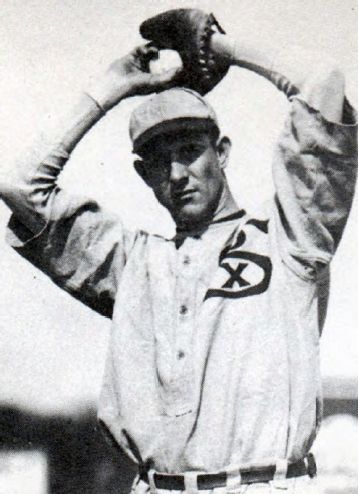 Right-handed pitcher Roy Wilkinson reached the pinnacle of his modest baseball career in only his second major-league game. A capable seven-year minor-league veteran, Wilkinson had been acquired by the Chicago White Sox late in the 1919 pennant chase to provide some respite for a strained pitching corps. Given a September start against the Philadelphia A’s, Roy responded with a five-hit shutout. But from that auspicious beginning, his big-league career soon went into decline.

Wilkinson was a nonfactor in the notorious 1919 World Series, providing mop-up relief in two lopsided Chicago losses. In 1920 he underperformed when placed in the White Sox rotation, posting victories in only two of his 12 starting assignments (although he pitched competent long relief.)

After the late-1920 season banishment of Black Sox Eddie Cicotte and Lefty Williams, Wilkinson was designated as the No. 3 Chicago starter for the ensuing campaign — and flopped miserably, going 4-20 in 1921. Early the following year, Chicago gave up on Wilkinson and released him to the minors. Back at lesser altitude, Wilkinson reverted to earlier form, hurling 11 more years of solid minor-league ball. In the final analysis, it appears that Wilkinson was among that legion of able minor-league pitchers whose stuff simply was not good enough to handle major-league opposition.

Roy Hamilton Wilkinson was born in Canandaigua, New York, on May 8, 1893.1 He was the fourth of seven sons born to coachman Edward C. Wilkinson (1855- 1921) and his wife, the former Mary Bond (1856-1938).2 Little is known of Roy’s early life or schooling. He first came to attention pitching for amateur and semipro teams in and around his hometown. Eyecatching performances against overmatched locals — Wilkinson reportedly struck out 44 batters and allowed but three hits over a three-game stretch while pitching for a Canandaigua nine — brought him to the notice of pro scouts.3 According to one account, Wilkinson entered the professional ranks in 1913, signing with the Waterbury Contenders of the Class B Eastern Association.4 In late July his services were acquired by the Cleveland Naps, but Wilkinson saw no American League action during his brief stay with the club. The Naps then farmed Wilkinson to the St. Thomas Saints of the Class C Canadian League, where he posted a sparkling 7-1 record in nine late-season outings.

The year 1914 was an eventful one for 21-year-old Roy Wilkinson. On the domestic front, he tied the knot with hometown girl Melissa Elizabeth Beers.5 Meanwhile, a squabble had broken out regarding the baseball rights to Wilkinson. “The St. Thomas club has refused to sell Roy Wilkinson to the Cleveland American League club, which club loaned the player to St. Thomas last August,” reported Sporting Life.6 Eventually the Saints prevailed in the rights dispute but Wilkinson had a disappointing sophomore campaign in the Canadian League, going 10-12 in 30 appearances.

He returned to St. Thomas for a third season in 1915. Baseball-Reference.com provides no stats for Wilkinson that season but he must have impressed, for the next year he jumped all the way up to the Newark Indians of the Double-A International League. Pitching for a last-place (52-87) Newark club, Wilkinson struggled, posting a lackluster 4-12 log in 18 appearances. He bounced back in 1917, going 12-6 with a fine 2.39 ERA in 222 innings pitched. Following this creditable season, Wilkinson was reportedly drafted by the National League’s Philadelphia Phillies.7 But his major-league debut would be made elsewhere, when the Philadelphia draft was canceled and Newark sold his contract to the American League’s Cleveland Indians.8

On April 29, 1918, the Indians sent Wilkinson to the mound to pitch the ninth inning of a game irretrievably lost to Chicago. He pitched a perfect frame but never received another chance with Cleveland. Wilkinson spent the remainder of the 1918 season with the Rochester Hustlers of the International League. For reasons unknown, he pitched only 55 innings for Rochester, going 3-2, with a 1.64 ERA.

No record of World War I military service has been found for Wilkinson, but he did lose his wife that year. Melissa Beers Wilkinson was only 22 when she died sometime in 1918. Thereafter, Roy remarried quickly, taking 25-year-old Jessie Josephine Rosenbloom of nearby Monroe, New York, as his second wife on March 24, 1919.

Wilkinson went to 1919 spring training with Cleveland but was squeezed off the Opening Day squad by returning military veterans. He responded to the demotion by having an outstanding year for the Columbus Senators of the Double-A American Association. By early September his record stood at 17-15, with a leagueleading 2.08 ERA in 298 innings pitched. At that point, the Chicago White Sox obtained Wilkinson from Columbus in exchange for veteran left-hander Dave Danforth. Roy was now joining a major-league outfit overloaded with playing talent but divided by clubhouse dissension. One faction was headed by Ivy League-educated Eddie Collins, the star second baseman and team captain. The other, a more hardscrabble group, was led by first baseman/tough guy Chick Gandil. New arrival Wilkinson, no more than a late-season extra arm for a pitching staff thinned by the shutdown of ailing and injured Red Faber, was not a member of either side.

On September 12, 1919, Wilkinson provided the pitching help that manager Kid Gleason had been seeking, shutting out the Philadelphia A’s 7-0 in his first appearance in a Chicago uniform. He then backed up his sterling debut with scoreless relief appearances against the New York Yankees and Boston Red Sox. The only blemish on his log came on the season’s final day, a seven-inning relief loss in a meaningless game against Detroit. In his brief time with the White Sox, Wilkinson had made a good impression, going 1-1 with a fine 2.05 ERA in 22 innings pitched.

But with the pennant-winning Sox entrusting World Series starting assignments to staff mainstays Eddie Cicotte (29-7), Lefty Williams (23-11), and rookie Dickey Kerr (13-7), Wilkinson was not expected to see any postseason action against the NL champion Cincinnati Reds. That all changed in Game One, when Cicotte suddenly collapsed in the fourth inning. With the White Sox trailing 6-1, manager Gleason turned to his second-line hurlers, beginning with Wilkinson. Roy pitched decently through the seventh (five hits, one earned run), all to no avail. The Reds posted a decisive, one-sided 10-1 victory.

Wilkinson also saw action in Game Eight, holding the Reds in check over the final four frames (four hits, no earned runs), as the Sox tried to rally from the insurmountable early deficit left by the strangely ineffective Lefty Williams. Again, Wilkinson’s good work was for naught. The Reds captured the contest 10-5, completing the Series upset of the once-heavily-favored White Sox.

Despite the disappointing World Series outcome, the White Sox remained a powerhouse. Stars like Eddie Collins, Shoeless Joe Jackson, Buck Weaver, and Happy Felsch posted gaudy offensive stats in the high-octane AL of 1920. And the recovery of health and form by Red Faber gave the team a formidable pitching staff. By season’s end, Faber, Eddie Cicotte, Lefty Williams, and Dickey Kerr were all members of the 20-win club.

The depth of the White Sox rotation provided little starting opportunity for Roy Wilkinson. And when starting assignments were presented, he pitched poorly. In 12 randomly-spaced starts, Wilkinson went 2-8 with a high ERA. He held his place on the club with competent relief work (5-1, with two saves), suggesting that his effectiveness often depended on how many times the day’s batting order faced him.

Meanwhile, in the midst of this up-and-down campaign, a personal highlight occurred for Roy. Early on the morning of July 1, 1920, daughter June Mary Wilkinson was born.9 Hours later, the new father marked the occasion by tossing eight innings of scoreless relief against the St. Louis Browns.

By late September the White Sox, Cleveland, and New York were locked in a three-way pennant dogfight. Then long-murmured allegations about the integrity of Chicago’s play in the 1919 World Series exploded in the press. With little more than a week left in the regular season, Cicotte, Williams, Jackson, Weaver, Felsch, and other Chicago stalwarts were placed on suspension, pending the disposition of a grand-jury probe.

With that, White Sox pennant hopes expired. Pitching for a 96-58 second-place club, Wilkinson had been substandard, posting a 7-9 record with a 4.03 ERA. In 145 innings pitched, Roy surrendered 162 hits and walked 48 while striking out only 30 batters. But with White Sox pitching ranks depleted by the Cicotte and Williams suspensions, Wilkinson still figured prominently in Chicago’s plans for 1921.

Wilkinson tried to work the situation to his financial advantage, holding out when the White Sox opened 1921 spring training. He was also among the “honest White Sox” who voted to deny their suspended teammates a share of the 1920 second-place money.10 Once signed, the “tall and willowy [6-foot-1, 170-pound] pitcher” was designated a key component in the rebuilding of the Sox rotation.11

But the 1921 season proved to be a disaster for Wilkinson. Slotted behind Red Faber and Dickey Kerr in the rotation, he dropped his first ten decisions and did not post a victory until July 20. Although the White Sox were not the same club that had been an American League juggernaut, the 1921 lineup still featured future Hall of Famers Eddie Collins, Ray Schalk, and now Harry Hooper, plus new talents like Bibb Falk, Earl Sheely, and Johnny Mostil. That a White Sox hurler could succeed with this cast behind him is reflected in the records of Faber (25-13) and Kerr (19-17). But not No. 3 starter Roy Wilkinson, who lost with numbing regularity. Press accounts of Wilkinson’s defeats followed a monotonous outline, usually reporting that he had pitched well the first couple of times through the opposition lineup, only to be hit hard in the later innings. An undeserved (three earned runs in one inning’s work) relief win over Cleveland on October 2 elevated the final Wilkinson log to an abysmal 4-20, with a 5.13 ERA. In 198⅔ innings pitched, he had been racked for 259 hits and surrendered 78 walks, while striking out only 50.

Notwithstanding Wilkinson’s 1921 record, The Sporting News maintained that “critics were favorably impressed and speak encouragingly of his prospects.”12 But Wilkinson was not long for the majors. Following a bad start (0-1, 8.74 ERA on 24 hits/6 walks in 14⅓ innings pitched), the White Sox sent Wilkinson and ineffective left-hander John Russell to the Kansas City Blues of the American Association in exchange for veteran pitcher Ferdie Schupp.13 Although he continued pitching professionally for another decade, Roy Wilkinson’s major-league career was over. In parts of five seasons, he compiled a 12-31 (.279) record with a 4.66 ERA in 380⅔ innings pitched.

As he had earlier, Wilkinson pitched capably once he returned to the minors. His time with Kansas City was highlighted by an 18-6 record for the American Association champions of 1923. After a mid-1925 transfer to the Louisville Colonels, Wilkinson continued to work effectively, going 17-11 in 1930 and remaining with Louisville until he called it quits at the conclusion of the 1932 season. In 18 minor-league seasons, Wilkinson’s cumulative record was a respectable 166-152 (.522), with a 3.04 ERA in more than 2,700 innings pitched.

Once his playing career was over, Wilkinson receded into obscurity. In January 1932 it was reported that second wife Jessie had filed for divorce and custody of their now 11-year-old daughter, June.14 But the 1933 Louisville City Directory listed Roy and Jessie Wilkinson as living together at a local address. The 1941 Louisville Directory, however, has Roy and an unknown Catherine Wilkinson living in rooms on South Second Street, not far from the Seagram’s Distillery, where Roy had found work.15 Wilkinson then disappears from the directory rolls until June 1956, when he was admitted to Louisville General Hospital suffering from lung cancer. He died there on July 2, 1956, aged 63.16 No obituary was published in Louisville newspapers, and Wilkinson’s survivors and his place of burial are unknown.17