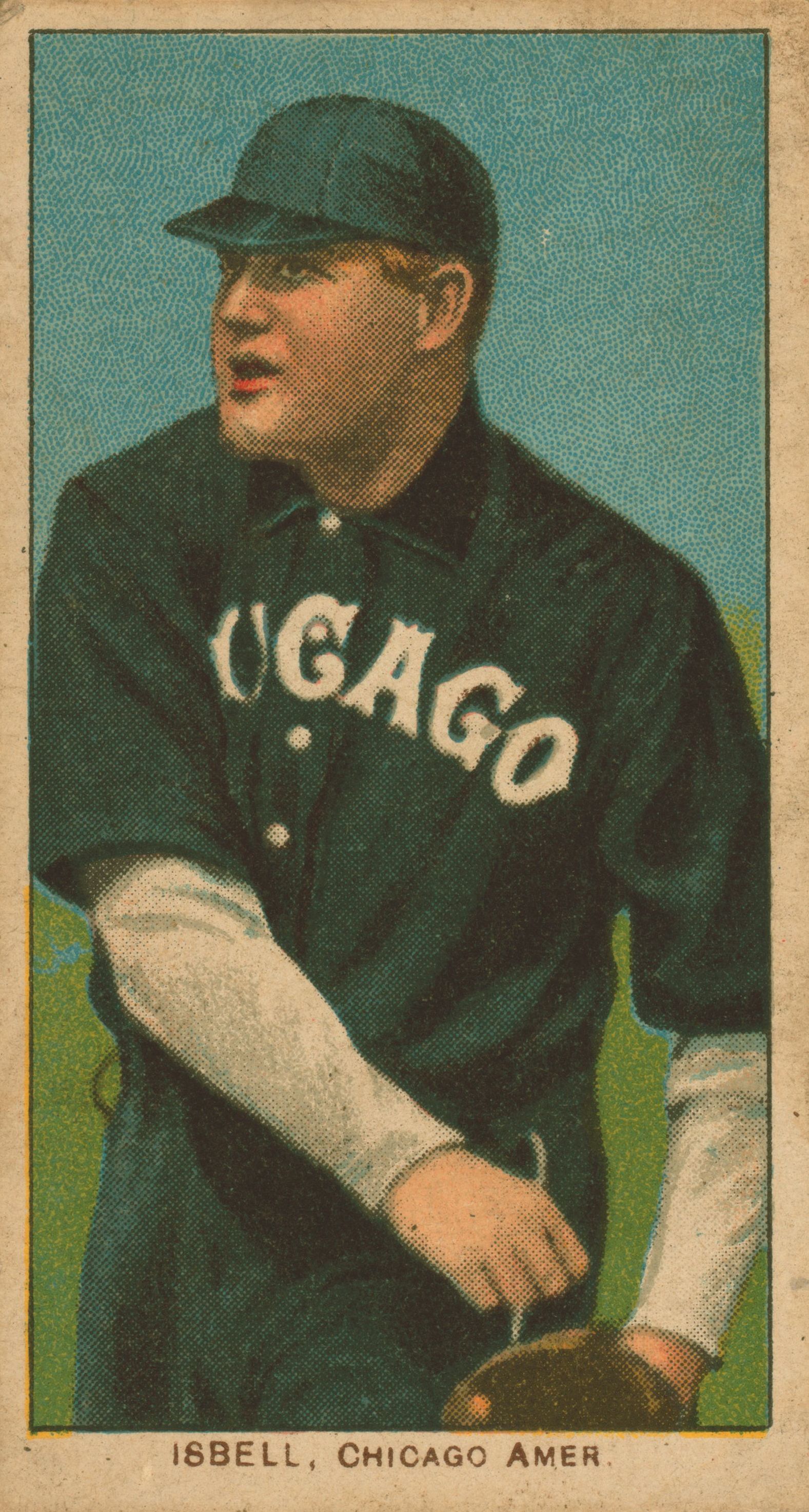 A prematurely bald, round-faced Irishman, Frank Isbell was a fixture of the Chicago White Sox for the first decade of their existence. Best remembered as the second baseman of the 1906 “Hitless Wonders,” Isbell spent most of his career as a versatile utility player – one of the few men to have played all nine positions in the major leagues – before becoming a minor-league manager and magnate. As a young ballplayer, Isbell’s acute sensitivity about his already receded hairline earned him the unappreciated nickname of “Bald Eagle.”

William Frank Isbell was born to John Isbell and Julia Lawton Isbell on August 21, 1875, in Delevan, New York. Although little is known about his childhood, the young Isbell played semipro baseball as a pitcher and outfielder around Minneapolis in 1895, including a brief stint with the Macalester College team, where the 5’11”, 190-pound right-handed thrower was dubbed “The Tall Pine” by his teammates. The following year Isbell began his professional career as a pitcher for Charles Comiskey‘s St. Paul club in the Western League. A left-handed batter, he hit .365 for the Saints during the 1896 season, and Comiskey tried him out in the outfield and various infield positions throughout the year. Drafted by Jim Hart for the Chicago Orphans in 1898, Isbell became a hero before appearing in a single major league game. On April 16, 1898, the grandstand at Sportsman’s Park in St. Louis burned down during a game, injuring dozens. Isbell, taking tickets at the ballpark gate, witnessed a fleeing family leave an infant behind as their home across from the ballpark erupted in flames. Isbell ran into the burning house, grabbed the baby, and carried it to safety. During his stay with the club he appeared in 45 games as a utility player and spot starter, batting .233 in 159 at-bats while posting a 4-7 record with a 3.56 ERA in 81 innings pitched. In August, he was returned to St. Paul for pitcher Bill Phyle.

Two years later, when Comiskey transferred the St. Paul club to Chicago in the new American League, Isbell followed the Old Roman and was the regular first baseman for the White Sox from 1900 to 1903. In 1901, he led the league with 52 stolen bases while batting .257 with three home runs, 70 RBI and 93 runs scored. That year he also established an American League record, as of 2014 never surpassed in a nine-inning game, by leaving 11 men on base during an August 10th contest against Cleveland.

Over the next three seasons, Isbell struggled at the plate, posting low on-base percentages with little power. When first baseman Jiggs Donahue arrived in 1904, Isbell moved around the diamond to various positions and was eventually installed at second base. That year was also his worst as a major leaguer, as he hit just .210 with a .255 on-base percentage and only 14 extra base hits in 314 at-bats. The following season, Isbell played part-time as a second baseman and outfielder and had a breakout hitting season, attaining career highs in batting average (.296), on-base percentage (.335) and slugging percentage (.440). The performance was good enough to earn Isbell a full-time position in 1906 as the club’s second baseman.

Throughout his career, Isbell earned the reputation of a dependable “all-around man” on the diamond. As a utility man there has seldom been a player in the class of ‘Izzy,’” wrote a contemporary scribe. “He has been all around the ‘circuit,’ from first base to the outfield.” For Isbell, the talented utility man was “a jewel, something to be desired almost above all else.” “When you are a baseball Jack-of-all-trades,” Isbell explained, pointing to the Cubs’ Arthur “Solly” Hofman as a prime example, “you must needs be a hitter and a base-runner. For you are sure to be called on.” On two occasions when both Chicago catchers were injured, Isbell even donned the mask and went behind the plate. Over ten major league seasons, Isbell batted .250, with a .289 on-base percentage, and logged 619 games at first base, 351 at second base, 23 at third base, 17 at pitcher, 15 at shortstop, 2 at catcher, and 103 at the various outfield positions, with an overall .974 fielding percentage.

Typically batting third during Chicago’s pennant-winning 1906 season, Isbell emerged as one of the best hitters on the “Hitless Wonders.” That year he led the team in hits (153), triples (11), stolen bases (37), and batting average (.279), and though his .352 slugging percentage was not significantly better than the American League’s .318 mark, playing in the cavernous South Side Park, Isbell trailed team leader George Davis by just .003 in that category on the strength of his 124 singles, 18 doubles and 11 triples. But Isbell saved his best performance for the last two games of the 1906 World Series. After he slumped through the first four games of the Series, manager Fielder Jones lashed out at Isbell’s dismal 1-for-16 performance. But Izzy rebounded, hitting four doubles and driving in two runs in Game Five and knocking out three hits in Game Six to salvage a .308 Series average as the Sox upset their West Side rivals. Isbell’s World Series records for most hits in two consecutive games (7) and most extra base hits in a game (4) still stand as of 2014.

Isbell’s production dropped off in 1907, as his batting average fell to .243 in 125 games. Accidentally spiked by teammate Patsy Dougherty during an off-day workout on August 26, 1907, Isbell asked Comiskey for his unconditional release so that he could fulfill his dream to manage the Wichita team in the Western Association. Several reports indicate that the Old Roman was willing to grant Isbell his release, but other major league clubs would put in a waiver claim. In any case, Comiskey refused, and the following spring Isbell became a salary holdout, and spent the first two months of the 1908 season working out on his Wichita farm. He finally reported back for duty in June to once again serve as the club’s first baseman, a position he held through the 1909 season. He posted a .247 batting average in 84 games in 1908, as Chicago narrowly missed another American League pennant. In 1909, his final season in the major leagues, Isbell struggled at the bat, posting a .224 batting average in 120 games. The following January, Isbell was granted his release.

Upon leaving the major leagues, Isbell returned to Wichita, where he enjoyed hunting and fishing. In addition to playing first base, Isbell was the manager and part-owner of the Western League’s Wichita Jobbers for two seasons, transferring the franchise to Pueblo, Colorado, midway through the 1911 campaign. In 1912, Isbell moved to Des Moines in the Western League, where he was manager as well as president and part-owner of a team controlled by Comiskey. After five years in Des Moines, he returned to Wichita as president of the club from 1917 through 1926, serving as manager for the 1917 campaign. His Wichita team won the Western League pennant in 1921. Retiring from the Wichita club in 1926, Isbell operated for several years as a freelance scout before he accepted the presidency of the Topeka Senators, also of the Western League, in 1931. During his tenure as a Western League magnate, Isbell developed future talent for the White Sox and other major league clubs, including pitcher Urban “Red” Faber, tirelessly boosting young players he felt deserved a chance in the big leagues.

After his retirement from baseball, Isbell worked in the Wichita recreational department and managed a local filling station. In 1940, he was elected to the post of Sedgwick County Commissioner by a wide margin. Isbell’s friend, Fred J. Mankoff, recalled that “all those kids whom Frank allowed to occupy the so called ‘Kid Bleachers’ free, were now voters….It was surprising, who (sic) these grown up ‘Kids’ went to bat for Frank.” Married twice, Isbell had one son with his first wife, Addie Baker, who died in 1929.

Isbell passed away on July 15, 1941, at age 65, after suffering a heart attack. He was buried in Wichita’s Old Mission Cemetery.