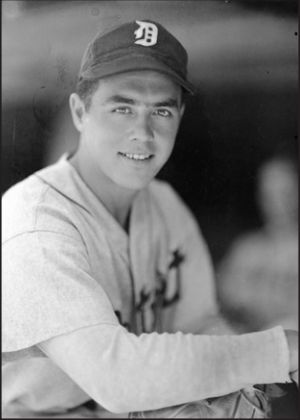 In the summer of 1922, a young Frank Reiber would make trips to Navin Field from his home in Detroit. At the ballpark he would go on the field and make himself useful to the Tigers by shagging fly balls and cleaning up. One day coach Dan Howley gave him a catcher’s mitt and asked him to help warm up the pitchers. Eventually Reiber caught the attention of Tigers manager Ty Cobb and expressed his dream of one day playing in the major leagues. Cobb honestly told him that he had little chance of making the majors due to his feet pointing the wrong way. Cobb said he believed the best players are pigeon-toed, while Reiber’s feet pointed outward. Reiber spent the next few days watching the feet of major-league players, eventually reaching the conclusion that Cobb’s theory on players’ feet was incorrect.1 Eleven years later, in 1933, the 5-foot-8, 169-pound Reiber proved Cobb wrong by making his major-league debut as a catcher with the Tigers.

Frank Bernard Reiber was born on September 19, 1909, in Huntington, West Virginia. His father, Godfried, was born in Ohio, and moved to West Virginia, where he met and married Frank’s mother, Marie Moselle Click, on August 1, 1898. Marie was a West Virginia native whose parents were from Pennsylvania and Ohio. Godfreid worked as a farmer and a brewer while living in West Virginia. Frank was the youngest of six children, three boys and three girls. The Reibers moved to Detroit while Frank was young.

While attending Northwestern High School in Detroit, Frank tried out for the baseball team but he was unable to make the squad; the coach told him he was too small. Frank left school to work in construction but enrolled in Kellogg High School in Battle Creek after one year. At Kellogg he played on the football, basketball, and baseball teams.2

In 1930 the Tigers sent scout A.J. “Wish” Egan to Battle Creek to watch Reiber play catcher for the Kellogg team. Egan was unimpressed with the catcher but was interested in the shortstop. After the game he found out that Reiber was the shortstop and played both positions. The Tigers invited Reiber to work out for manager Bucky Harris at Navin Field. Reiber made a positive impression and was signed by the Tigers.3 Sent to Evansville in the Three-I League, he played 18 games at shortstop but struggled to meet the Tigers’ expectations and was demoted to Fort Smith, Arkansas, in the Western Association. There Reiber’s play improved, and he hit .306 while playing in 79 games at second base.

In 1931 the Tigers returned Reiber to Evansville to play second base, but he was forced into duty as a catcher after the first two catchers on the team were injured.4 It turned out to be a fortunate move for Reiber, and he spent the rest of the year as Evansville’s number-one catcher, appearing in 84 games behind the plate.

In 1932 Reiber became a top prospect in the Detroit organization. Playing with Beaumont in the Texas League, he had a big year along with future big-league teammates Hank Greenberg, Pete Fox, and Schoolboy Rowe. They led Beaumont to the Texas League title. Reiber hit .315 with ten home runs in 113 games. At the end of the season he was named to the Texas League all-star team, and was considered one of the greatest catchers in Texas League history.5

In 1933 Reiber went to spring training with an opportunity to make the Tigers team as a backup catcher. Ray Hayworth was slated as the number-one catcher, leaving Reiber in a competition with Gene Desautels and John Pasek for the backup positions. Reiber continued a practice that he started in the minors of carrying a notebook on the practice field in order to write down tips from coaches, as well as items he could remember about the hitters. He would review the notebook each night before going to sleep.6 A good spring training with the bat led to a spot as the number two-catcher on the squad.

On April 13 Reiber appeared in his first major-league game, as the starting catcher, going hitless in four at-bats.  He picked up his first major-league hit and RBIs on April 22, off Lloyd Brown of the St. Louis Browns.  During his brief playing time his erratic throwing started to concern the Tigers. Not only was he having trouble making throws to the bases, but returning the ball to the pitcher was becoming an adventure.  Manager Harris believed Reiber’s throwing problems were due to nervousness in appearing before friends and family in Detroit.  He thought a start on the road might prove to be the cure for his throwing problems. On April 28 in St. Louis, Reiber started behind the plate. In the first inning the Browns stole four bases off him. He remained in the game to hit a home run in the top of the second inning.  In the bottom of the second the Browns stole two more bases off Reiber, and his confidence in his ability to throw was shot.  In the third inning he hit a triple, and after the end of the inning Harris pulled him for Hayworth. It turned out to be Reiber’s last start of the year with the Tigers. Harris sent him to a psychiatrist, who confirmed Harris’s belief that Reiber’s problems were related to his fears of failing in front of his friends and family.7 He played in eight more games that season, making one appearance as a catcher and seven as a pinch-hitter. On June 2 the Tigers sent him to Toledo for the rest of the season. While with the Mud Hens, Reiber worked on his fielding and throwing, while appearing in 81 games.

The Tigers invited Reiber to spring training in Florida in 1934. The arrival of Mickey Cochrane as the starting catcher and manager made it unlikely that he would get significant playing time behind the plate. His throwing problems continued in the spring. However, with help from Detroit coach Cy Perkins, a former catcher, he worked on changing his throwing to a more overhand motion.8 He played well enough to go north with the team as the third catcher behind Cochrane and Hayworth. By May 25 he had only three plate appearances before Cochrane decided to release him to Montreal, where he could get more work. The agreement with Montreal allowed the Tigers to recall Reiber with a day’s notice.

In Montreal Reiber played in 70 games, including 42 behind the plate. Overall 1934 was a disappointment for Reiber due to the lack of opportunities during his time with the Tigers. His defense was still a question mark, but his hitting continued to show potential.

The year 1935 brought another invitation to spring training with the defending American League champions. Cochrane and Hayworth were still on top of the Tigers’ catching depth chart, but as in the year before, Reiber made the team as the third catcher out of spring training. Again opportunities to play were limited; he remained on the roster for the entire season, but played in only eight games. Reiber’s main contribution to the team was as the bullpen catcher. He made only two starts and had six pinch-hitting appearances all season, and had three hits in 11 at-bats with one RBI. Eligible to play in the World Series, Reiber remained on the bench to watch his teammates win over the Chicago Cubs in six games.

In 1936 Reiber again made the team as the third catcher behind Cochrane and Hayworth. His appearances were limited to pinch-hitting in April and May. An injury in June to Cochrane provided him an opportunity to play on an extended basis for the first time in his major-league career. In his first start of the season, against Washington on June 6, he had three hits. But his play as the starting catcher was sporadic and teams continued to steal bases against him. When Cochrane returned, Reiber was relegated to pinch-hitting duty. He got another start in the second game of a doubleheader against St. Louis on July 4, picking up three hits. He appeared in only one more game before he was traded to Montreal for catcher Glen Myatt on July 12. Cochrane felt that Myatt provided the Tigers with more stability behind the plate than Reiber.

In Montreal Reiber hit .302 in 41 games. This impressed the Tigers enough for them to bring him back in September. He appeared in four games before the end of the season. In December the Tigers released him to Toledo.

The spring of 1937 brought another trip to spring training with the Tigers for Reiber. This time he lost the competition for the backup catcher position, to Birdie Tebbetts. The Tigers sent him to Toledo, where he appeared in 87 games, including a contest against Milwaukee on August 24 in which his chest protector caught fire on the field during the eighth inning. The fire was due to an errant cigarette discarded into his gear while in the dugout during the top half of the inning.9 In December of 1937 Toledo sold Reiber and first baseman Jack Burns to Toronto.

Burns became the manager of Toronto in 1938 and made Reiber his regular catcher. Reiber played in 138 games, hitting .261 with 13 home runs and 90 RBIs. He was the regular catcher for the team and appeared in the most games of his career.

Reiber had high expectations heading into the 1939 season, believing that another opportunity in the big leagues was within reach. But he was hampered by a bone fracture in his index finger, incurred in a spring-training game.10 His playing time was limited (32 games), and another hand injury in late August led to Toronto’s paying him off and sending him home.11

In January 1940 Reiber received $5,000 from Detroit after Commissioner Kenesaw M. Landis ruled that Detroit and affiliate clubs had used “fake agreements,” “false certificates of club relationships,” “cover-up” deals, and similar practices in the operation of a farm system.  Reiber was one of more than 90 players granted free agency, a move that essentially destroyed the Tigers’ farm system.12

A month later, Reiber went to spring training with Toronto, but was having trouble reaching an agreement on a contract. The Toronto management became so frustrated with him that they gave him permission to make his own deal with any club.13 Eventually Portland of the Pacific Coast League purchased Reiber’s contract from Toronto for $2,500.14 He appeared in only 37 games. In 1941 Reiber returned to Portland but played in only two games. In April he requested a suspension because he was unable to get his arm in shape.15 With his body showing signs of age and the wear and tear of ten years of catching, Reiber’s baseball career ended. He was 31 years old.

After baseball, Reiber went to work for the Douglas Aircraft company in Santa Monica, California. He later lived in Florida with his wife, Julie, and died on December 26, 2002, in Bradenton, at the age of 93.