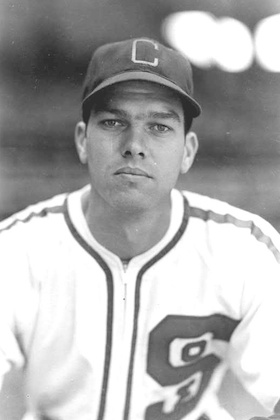 The Dickeys were indeed a baseball family. Father John Dickey, wrote Joe Wancho, “had been a pitcher and catcher for Memphis in a semipro league, older brother Gus played second base and pitched in the East Arkansas Semipro League” and Bill Dickey was a catcher who played his entire 17-year major-league career for the New York Yankees and was voted into the Baseball Hall of Fame in 1954.1

Bill Dickey was born in 1907 and began his career in the big leagues in 1928, when his younger brother, George Willard Dickey, was 12 years old. George became a catcher, too, and played in six seasons for the Boston Red Sox and Chicago White Sox. Bill was clearly the better ballplayer, but in later life, it was George who provided employment for Bill.

John Dickey and his wife Laura Bell Dickey had one daughter and four sons. George was the youngest, born on July 10, 1915, in Kensett, Arkansas. John was from Pennsylvania originally and Laura from Ohio. At the time of the 1920 census, as George turned 5, John Dickey worked as a laborer in the electric plant. Ten years later, the family had moved to Little Rock and John was working as a brakeman for the Missouri Pacific Railroad. Son Gus Dickey held the same job.

George attended the Peabody and Pulaski Heights schools in Little Rock for nine years, then Central High School for two more. His brother, of course, was already starring for the Yankees before the time George had reached high school. As early as age 12, when the Yankees came to play the Browns in St. Louis, George (who attracted the nickname “Skeets”) made sure he was at Sportsman’s Park to catch batting practice. In fact, outfitted with a Yankees uniform, he “made several swings around the American League with the team.”2 When he was 17, the Yankees took him along to spring training in 1933.3

Signed to a Newark contract in the Yankees system, he was placed with their Class-C Wheeling Stogies of the Middle Atlantic League. Playing in an exhibition game against the Yankees on May 15, George hit a home run. In 37 games for Wheeling, he hit two homers and batted .286. On July 19, Dickey was transferred to the Class-A Scranton Miners. He hit .188 in the 17 games he played over the remainder of the season.

Who actually should be credited for signing George is unknown, but it was the trio of Col. Bob Allen, his son Edgar, and Lena Blackburne who apparently first spotted and signed older brother Bill Dickey.4 Since George spent so much time with the Yankees from such an early age, his signing may have seemed foreordained.

Placed in the Class-B Piedmont League, Dickey was having a very good year for the Norfolk Tars (hitting .297 with nine home runs in 74 games) until he broke his leg sliding into home plate. The Yankees let him go over the winter, giving him his outright release. He tried to catch on with the Giants in spring training 1935 but the injury clearly hadn’t fully healed and he returned home. He later caught on with the Little Rock Travelers, who through manager Doc Prothro had a good relationship with the Red Sox (formalized by 1936 into an affiliation). Prothro gave Dickey a shot and the young catcher ended up working in 107 games with a.261 average.

At the end of the season, the Red Sox purchased his contract. He was brought to Boston and arrived on September 12. A photograph caption in the next morning’s Boston Herald said he was “reputed to be of major league caliber right this minute.”5

Dickey debuted in the majors on September 21. The Yankees were the visiting team and the brothers Dickey both appeared in the box score. George, a switch-hitter, pinch-hit batting lefty for pitcher Stew Bowers in the bottom of the ninth, the Sox down by a 5-2 score. The home-plate umpire reportedly said to the Yankees’ catcher, “Bill, this boy looks like a green kid. Call for one down the middle and give the kid a break.” Bill Dickey supposedly said, “I’ll give him a break. He’ll be lucky if he sees the ball!” And George retorted, “Don’t do me any favors, mister. I can take care of myself.”6 He worked the count to 3-2 before flying out to Hill in left field.

He appeared in four more games that September for a total of 12 plate appearances. He never did get a base hit, and he struck out three times, but he did record a run batted in with a bases-loaded walk in the first inning of the second game of the September 24 doubleheader against the Athletics. It took him another year to get his first major-league base hit.

In 1936, Dickey worked for three clubs – Little Rock, Milwaukee, Minneapolis. Boston. Manager Joe Cronin said in spring training, “Dickey impresses me as a coming star.”7 The Red Sox started the season with three catchers – Rick Ferrell, Moe Berg, and George Dickey. He didn’t get used much, however, just three brief appearances, once in April, once in May (when he was called back from Little Rock after Ferrell hurt his ankle), and once in June. He was optioned out to Little Rock on June 13 and called back in late August.8 He was 0-for-2. He hit .208 in 28 games in Milwaukee and .213 in 38 games with Little Rock. Hehad been “rushed to Minneapolis” very briefly in early August before being called back to Boston.9

He appeared in seven September games, starting six of them, playing both halves of the September 27 doubleheader. In the first game, having appeared in 13 prior big-league games without a hit, he doubled as part of a 1-for-4 game. He was 0-for-3 with a base on balls in the second game. It wasn’t until 1941 that he got another hit.

In 1937, Dickey played the whole year at Minneapolis. He enjoyed a good season, batting .247 in 91 games, marred only by an incident on August 10 when he pushed an umpire and was fined $10. He was formally recalled to the Red Sox in August but not used. In February 1938, prior to spring training, he was optioned to the Pacific Coast League Portland Beavers. With another chance to play regularly, he again did well, batting .251 in 120 games. Both years he hit eight home runs, his 13th-inning home run on May 17, 1938, winning one for Portland. He made headlines another time with an 11th-inning single on August 25, driving in two to beat San Diego, 4-2. There had been another indication of combustibility, when he threw a few punches at teammate pitcher Bill Thomas. That one cost him a $50 fine assessed by manager Bill Sweeney.10

Mike Tresh was the first-string catcher for the White Sox, with Tom Turner and Dickey sharing backup duties. Dickey appeared in 32 games, spread throughout the season, including the August 24 and 29 games that bracketed his wedding in Chicago on August 25 to Margaret Allan Neal of Santa Monica, said to be “his childhood sweetheart.”12 Bill Dickey was best man.

George was 11-for-55 in at-bats (.200) for the year. He didn’t commit an error all year long. Dickey’s best day was probably June 18 when he drove in two runs in Chicago’s 3-2 win over the Yankees in Yankee Stadium. The first game in which both Dickeys served as starting catcher was July 26; Bill had three hits and George had two.

Dickey was more of a butterfingers in 1942. He caught in 29 games and committed nine errors for a .918 percentage. More frequently used as a pinch-hitter, despite his batting average, he got into 59 games in all, batting .233. Dickey drove in 17 runs, one of them a pinch-hit homer on July 18 to send the game against the Yankees into extra innings. It was one of only four homers in his major-league career. The Yankees, however, won the game.

Despite having a three-month-old son, on September 29, 1942, Dickey enlisted in the United States Navy as a seaman first class. He reported for duty in mid-October, and served in the Navy from October 1942 to October 1945.

Mickey Cochrane ran a very impressive wartime physical education program out of the Great Lakes Naval Base near Chicago and his Great Lakes Bluejackets baseball team included George Dickey and Johnny Mize. The games they played were good for morale; when they played the St. Louis Cardinals in an exhibition game on May 3, 1943, they beat the Cards, 5-2. Dickey caught the game and doubled, scoring a run. When they beat the Cubs with a one-hitter on June 9, the Bluejackets had run their record to 13-0. In September, Mize and Dickey and eight other ballplayers were transferred to the Bainbridge (Maryland) Naval Training Station for advance training. In January 1944, their training complete, they were moved on to other posts. Dickey was sent to Hawaii where he played for the Fifth Fleet team. A dispatch from Guam in March 1945 finds Dickey playing for the Navy All-Stars there.13

Brother Bill Dickey was in charge of all Navy baseball in the Pacific.14 Touring teams of service all-stars traveled to various islands and put on games, much to the delight of the service personnel stationed there. There was even talk of whichever team won the World Series in October coming to the Pacific to face a service all-stars team there, but with the war coming to a quick conclusion after the early August bombings of Hiroshima and Nagasaki, occupation and demobilization became the orders of the day.

It hadn’t been just baseball, of course. George Dickey was trained to work with Naval anti-aircraft batteries and became an expert instructor.15 The excellent Baseball in Wartime site reports that Dickey worked “as a gunnery instructor in the anti-aircraft school at Great Lakes Naval Training Station throughout 1943, handling classes in theory and firing at an airplane-towed target.”16

Dickey was back with the White Sox in 1946, again the third catcher on the team, behind Mike Tresh and Frankie Hayes. He appeared in 37 games, but had only one run batted in. His batting average was .192. His last appearance was on August 18. After that, he was sent to Little Rock and played some for them at the tail end of the season.

It was meant to be just Dickey and Tresh in 1947, but Dickey broke a finger playing pepper in March during spring training. It was just a hairline fracture, though, and he was ready to play before April was done. Dickey appeared in a career-high 83 games, catching more often than pinch-hitting. He batted .223, with 27 RBIs (exactly half his career output). It was his last season in the major leagues. He shows a lifetime .204 average, with 54 RBIs and a .974 fielding percentage.

Dickey’s last year in organized baseball was with the Birmingham Barons (Southern Association) in 1948. He was released outright to the Hollywood Stars in February, but he wasn’t satisfied with the terms being offered and thought he might retire and continue to work on a seat cover business he had established in Little Rock. He refused to report. On June 29, after Birmingham catcher Joe Stephenson broke his leg the day before, the Barons reached out to Dickey, signed him, and he appeared in 57 games, batting .182.

After baseball, Dickey remained in Little Rock and went into investments. Specializing in municipal bonds, he became vice president of Stephens, Inc., where he employed brother Bill Dickey to sell securities.

George Dickey died at age 60 of a heart attack while fishing near Little Rock on June 16, 1976 at DeWitt, Arkansas. In 2007, the Arkansas Travelers baseball team, Double-A affiliate of the Anaheim Angels, moved to Dickey-Stephens Park, named after Bill and George Dickey and the local businessmen Jack and Witt Stephens, who owned the investment firm.

8 “Red Sox Recall Eleven Players from Minors,” Boston Globe, August 28, 1936: 28. TNumerous May 26 newspapers report that he was recalled from Milwaukee, at the time Ferrell had hurt his ankle – and that manager Allan Sothoron had not wanted to lose him. Various newspapers also report the June 13 optioning to Little Rock.

15 See, for instance, the Omaha World-Herald of June 5, 1943: 9, which depicts him in his Navy uniform working with anti-aircraft equipment.