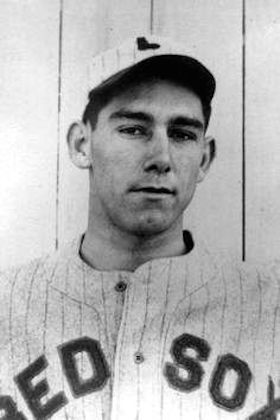 Of German ancestry, Stumpf was born 10 days before Christmas in 1910 – December 15 – in New Orleans. He was the second of six children born to Irene and John W. Stumpf, Louisiana natives. John was a street railway conductor at the time of the 1910 census, earlier that year.

George attended the Lafayette School for eight grades, but did not continue to high school.1 He was left-handed, and was listed at 5-feet-10 and 157 pounds.

Stumpf played semipro baseball in New Orleans for a team sponsored by D.H. Holmes Co., Ltd., a department store on Canal Street in the Crescent City where he had gone to work after school. He then went on to play for other semipro teams in Mobile, Alabama; Nashville, Tennessee; and Quincy, Illinois.2

On a 1929 Mobile contract in his first year in Organized Baseball, Stumpf was farmed out to Hattiesburg in the Class D Cotton States League.3 The team moved to Baton Rouge on May 30 that year. He played in 109 games in 1929, batting .269 with a fielding percentage of .977 (which coincidentally proved to be the same as his career minor-league fielding percentage). He played winter ball in New Orleans for the St. Regis semipro team.

In 1930 Stumpf played for the Mobile Bears in the Class-A Southern Association. He appeared in 139 games and hit .310 even at the higher level of play. He was living in Mobile at the time with his family; his father was now employed by the State of Alabama as a bridge tender.

After the 1930 season, George married Ethel Mary Judge on October 19. He played winter ball with the McGill team.

Stumpf began 1931 playing in the Southern Association with the Nashville Volunteers and right at the beginning of April was already said to have attracted the attention of the New York Yankees.4 He appeared in 37 games, batting .257 but went on to play in an even 100 games for the Quincy, Illinois, team of the Three-I League, where he hit for a .355 batting average with 10 home runs. He scored an even 100 runs, for the league lead. Quincy won the league playoffs; as soon as the flag was sewn up, Stumpf headed to Boston to join the Red Sox. His contract had been purchased by Bob Quinn and the Red Sox, reported the Boston Globe on August 24.

Stumpf apparently got lost on the way to Boston with some “considerable following of false trails,”5 but joined the team in time to play left field on September 19, his major-league debut. He was 0-for-3 and was doubled up on the bases with careless baserunning, perhaps believing there were two outs before the play.

Stumpf picked up his first big-league hits in the first game of a September 21 doubleheader against the visiting St. Louis Browns, with a single and a double in the first game, and two singles (with three RBIs) in the second game. Boston won both games. The Globe wrote that the “f” in Stumpf “means as little as the last ‘x’ in Foxx.” Dave Egan of the Globe added, “George Stumpf looks like something to write home about. The diving Dutchman made two giddy catches in left field, four hits in eight times at bat, and drove in three runs.”6

In the last game of the 1931 season, as Earl Webb hit his 67th double of the season, setting a record that still stands, Stumpf tripled in the top of the first to drive in a run, his third RBI of the season. He batted .250 in 28 at-bats in 1931.

Stumpf got a pretty fair to chance to show his stuff with the Red Sox in 1932. He appeared in 79 games, 51 in the outfield and pinch-hitting the rest of the time. He didn’t show enough, though, batting just barely over .200 (.201) and striking out three more times (21) than he walked (his on-base percentage was .278).

Stumpf opened the 1933 season and closed it with the Red Sox, playing in April, May, and September, but spent most of the season with the Reading Red Sox (New York-Penn League). He was optioned there on May 15, but it was said that manager Marty McManus and general manager Eddie Collins (Tom Yawkey having purchased the ballclub and brought in Collins as GM) believed he had the “talents to make good in the big league in another year or so.”7

In Reading, Stumpf hit .329 in 125 games and was a September call-up. In the big leagues, he had only been batting .200 when he was sent down in mid-May, but he was 13-for-36 with the Red Sox in September, bringing his average for the year up to .341. As it happens, when Stumpf played against the Yankees on October 1, 1933, the pitcher he faced was Babe Ruth, pitching his last game in the big leagues – a complete game. Stumpf was 2-for-5, but Ruth and the Yankees won the game, 6-5. Ruth hit a home run in the game. Stumpf flied out to Ben Chapman in the top of the ninth, the last opponent Ruth retired in a major-league game.

Stumpf played some ball in New Orleans, on the same team as Mel Ott, but new major-league rules prohibited play after November 1 so it was a winter without baseball.8 In December the Red Sox assigned him to play for the Kansas City Blues in 1934. In the Blues, the Red Sox had a Double-A farm club for the first time in many years.9 Stumpf was still seen as needing more seasoning and, indeed, he had only turned 23 in December.

Stumpf played four seasons in a row for Kansas City, the Blues quite unusually being a farm team for a different major-league club each one of the four years – the Red Sox, the Pirates, the White Sox, and the Yankees. He played in 130 or more games each season, with batting averages of .296, .322, .288, and .268. In 1936 Kansas City was a White Sox farm club and Stumpf started the season with the big-league team, playing in 10 games and batting .273. On May 7 he was returned to Kansas City and his major-league career was (in retrospect) over. He played in the minor leagues through the 1948 season.

After the 1936 season with the Blues, Stumpf played the next five years for another American Association team, the St. Paul Saints. Then it was on to the Columbus Red Birds, still in the AA, from 1943 into 1946. He appeared in only two games in 1945, however, since he was drafted in late April and spent most of the year in the Army Quartermaster Corps.

Mustered out, with the war over, Stumpf started 1946 with Columbus again but on June 13 his contract was purchased by the Houston Buffaloes and he spent the rest of the year in the Texas League.

In 1947 Stumpf was back in the Red Sox system, playing for his hometown ballclub, the New Orleans Pelicans. His final year, 1948, was also spent in Louisiana, but as player-manager for the New Iberia team in the Class-D Evangeline League. The team finished fifth in the eight-team league.

Stumpf moved on to other things. An obituary in Baseball Weekly said that he continued to play semipro baseball after his pro career was over, and that he played in Louisiana, Minnesota, Ohio, and Texas.10 After leaving baseball, Stumpf worked in shipyards and was a bartender at the Southern Yacht Club in New Orleans. He also worked at Schwegmann’s Grand Super Market in the city.11

Stumpf died of cancer at East Jefferson General Hospital in Metairie, Louisiana, on March 6, 1993. He was survived by his wife, Ethel, their son, George Jr., and two sisters.

1 The Lafayette School was the school Stumpf himself reported attending. His obituary in the March 10, 1993, New Orleans Times-Picayune, however, said he had finished the eighth grade at the Walter D. Flower Public School.

11 He’s the one who mentioned Schwegmann’s in his Hall of Fame player questionnaire. The other positions were noted in the New Orleans Times-Picayune, March 10, 1993.