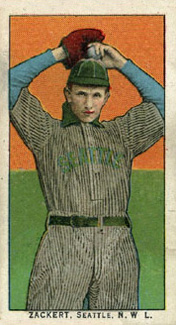 Left-handed pitcher George Zackert was one of a trio of 1911 St. Louis Cardinals who made their major-league debuts on the same day. He was also released by the same Cardinals organization three times in eight months, and had one trade that was negotiated by unauthorized personnel director Roger Bresnahan get “busted up.” He surrendered a whopping 15 runs (11 earned) in his eight and one-third career innings.

George Carl Harlon Zackert was born on December 24, 1884, in Hortonville, Vermont, to Joseph, a grocery merchant, and Anna W. Zackert. George had three brothers, Anthony, Louis, and Emil. Little is written about George’s childhood years, or exactly when the Zackert family moved to St. Joseph, Missouri. In 1904, young George pitched for the Goetz Brewing semipro team in St. Joseph,1 with brother Emil playing third base. The next year, George threw a no-hitter in the same Sunday semipro league for the Rex Company, playing again with Emil, who was the manager and first baseman.2 Before the 1906 season, George signed his first professional contract, with the local St. Joseph Packers of the Class C Western Association. In his first start, the six-foot tall lefthander displayed “superb pitching” in a 3-2 victory over the Webb City (Missouri) Goldbugs.3 George “twirled his first game in any league of recognized standing and to say that he made good is putting it mildly.”4 In his second start, however, young Zackert proved to be “easily hit and wild as a hare.”5 Zackert was soon released, and returned to the Goetz Brewery team.6

In mid-June, Zackert found his way to a Kearney (Nebraska) semipro team.7 William “Ducky” Holmes, manager of the Lincoln (Nebraska) Ducklings of the Class A Western League, happened to be scouting and saw Zackert pitch. Holmes signed Zackert on the spot. Zackert finished with a respectable 9-9 record in his inaugural professional season, even after losing four times to Sioux City.8 In the official Central Association batting averages for 1906, young George pulled up the rear, with the lefty swinger a league-worst .065, with a 4-for-62 line in 22 games.9

In 1907, Zackert returned to Lincoln, now called the Treeplanters. Early in the season, he was labeled “wild as a hare” with “the disc as hard to locate as if it were the North Pole.”10 In early August, Zackert was loaned to the Waterloo Cubs of the Class D Iowa State League, a de facto farm team for Lincoln, and one which was in the middle of a pennant race.11 He ended up with a 6-1 record during his short time in Iowa.12 Zackert returned to Lincoln after the end of Waterloo’s season.13 He finished with a 6-10 record during his two stints for Lincoln.14

Back with Lincoln, now called the Railsplitters, in 1908, he compiled a .400 winning percentage in 13 games, but was 0-for-24 at the plate,15 before being farmed out in July to the Ottumwa Packers of the Class D Central Association (formerly named the Iowa State League). By month’s end, Zackert was “setting the league on fire.”16 Three days later, he threw a 12-inning, three-hit shutout over Harry Gaspar and the reigning league champion Waterloo (Iowa) Lulus.17 On September 3, Zackert lost a 4-1, 20-inning decision to Harry Stauffer and the Jacksonville (Iowa) Lunatics.18 After the season ended, he pitched for the Creston (Iowa) semipro squad in a fall tournament in nearby Clarinda, Iowa.19

In 1909, Zackert remained in the Central Association, moving to Waterloo. He posted a 17-17 mark in 331 innings pitched, including a July no-hitter against the Kewanee (Illinois) Boilermakers.20 In the off-season, Zackert, along with infielder George Pennington, was sold by Waterloo to the Seattle Giants of the four-team Class B Northwestern League.21 He pitched the first shutout game of the new Seattle ballpark in 1910 when be bettered the Tacoma Tigers, 3-0, in May.22 Zackert posted a team-high 13 wins, along with 20 losses, for the last-place Giants. After the Northwestern League season ended, “Zeke” was purchased by the Portland Beavers of the rival Pacific Coast League. However, PCL president Judge Thomas Graham suggested to Portland president W.W. McCredie that the transaction “might not be advisable” for continued coexistence between the two Pacific Northwest leagues.23 Thus, Zackert never joined the Beavers.

In 1911, Zackert, still with Seattle, went 17-12 for the third-place Indians. After “burning up the Northwestern League,” he was drafted by the St. Louis Cardinals in late August.24 Owing to “an emergency call from manager Roger Bresnahan,” Seattle President Dan Dugdale allowed Zackert to depart for St. Louis on September 16.25 He was given a “grand farewell” by his Seattle teammates upon his departure for the Midwest.26

Zackert made his major league debut on September 22 against the New York Giants.27 He was summoned in the top of the 10th inning in a 3-3 tie, relieving fellow first-timer Roy Radebaugh. In the inning, Zackert struck out two and picked a runner off second base. However, in between, third baseman Ed Conwell, in his only major league game, fumbled an “easy roller” for an error. The next batter doubled, giving the Giants the go-ahead run in a 4-3 victory.28

Two days later, in the ninth inning of an eventual 8-2 loss to the Philadelphia Phillies, Zackert surrendered four runs, a nightmare that “will remain in young Mr. Zackert’s memory for some time to come.”29 On September 28, Zackert made his only start in the majors. The “young southpaw” shut out the Brooklyn Superbas on six hits through the first four innings at Robison Field.30 Unfortunately, he allowed six more hits in a disastrous fifth inning, resulting in four runs, in an 8-4 defeat.31 On October 3, Zackert was summoned four batters into the game, after starter Gene Dale had walked the bases loaded. Zackert gave up two hits and a walk without recording an out, facing three batters before being relieved on the mound. In the official records, Zackert was charged with four runs.

After the 1911 season, Zackert was sold by manager Bresnahan, who was acting as the de facto personnel director, to Montreal of the newly-created Class AA International League for $500. However, Montreal soon believed Zackert “didn’t measure up to Class AA standard,” so they returned the player to St. Louis and filed a claim to get their money back. The National Commission agreed with Montreal.32 Another aspect of the decision was that Bresnahan did not actually have the capacity to act on behalf of new owner Helene Robison Britton and the Cardinals organization,33 due to their deteriorating working relationship.34 Therefore, the deal was voided, with the Commission also ruling that St. Louis must continue to pay Zackert’s salary for this down time.35

In late May of 1912, the Cardinals sold him for $500 to the last-place Bloomington Bloomers of the Class B Illinois-Indiana-Iowa League.36 He defeated the Quincy Old Soldiers two days later, leaving the “Vets lifeless.”37 However, after two games,38 Zackert refused to sign a contract at the low Three-I salary level. The National Commission once again ruled on a Zackert issue, deeming the purchase by Bloomington null and void. They asserted Zackert was still under control of the Cardinals, because they had continued to pay him.39 While in limbo, he started and won for the Royal Theaters (a silent film establishment) squad in the St. Joseph Intercity league on June 29, with an opposing player for the Asylums team (employees of the State Lunatic Asylum just outside St. Joseph40) attacking him with a bat.41

Zackert returned to St. Louis and appeared in one more final game for the Cardinals. On July 17, he made a one-inning relief appearance against Brooklyn, giving up two runs.42 He was summarily released the next day by St. Louis for a third time.43 His major league career consisted of an 0-2 record, with 15 runs (11 earned) and 17 hits allowed over five poor outings. In late July, Zackert pitched for a Brennar, Kansas, semipro team.44 In the fall, he was back in Creston, Iowa,45 on another semipro squad.46

Zackert attended the 1913 training camp for the Spokane (Washington) Indians, back in the Northwestern League, but was released before the season. He signed a couple of weeks later with the Muscatine Wallopers, once again in the Central Association. In his Muscatine debut, Zackert had the Keokuk Beavers “feeding out of his southmitt all the way” in a 7-1 victory.47 On Memorial Day weekend, Zackert beat Waterloo, 1-0, in 14 innings, knocking in the winning run himself.48 In June, he threw a complete-game victory against Jimmy Lavender and the Chicago Cubs in a home exhibition.49 Zackert led the Central Association with a 22-7 record and 230 strikeouts in 282 innings.50

In 1914, he had 22 more victories for Muscatine, now called the Buttonmakers, just one off the league lead. After the season, he worked in a harness and saddlery shop in St. Joseph.51 He was hoping to land as a player-manager of the Mason City (Iowa) semipro team, but that fell through, so he signed for a third year with Muscatine, now known as the Muskies.52 On June 10, Zackert pitched an 11-inning, three-hit shutout, beating Keokuk, 1-0.53 Nonetheless, the “war horse” and “famed southpaw who brought many victories to [the] local club” was released by manager Ned Egan in late July.54 In watching the next day’s contest from the stands, he lamented that the “four-veteran” roster rule might pose difficulty in finding a new job. Fortunately, three days later, after wiring Waterloo to inquire, he joined the Jays, his same team from six seasons prior.55 He compiled a composite 18-13 mark in the Central Association for 1915.

In 1916, his last professional season, he went 18-10 for Waterloo, now called the Shamrocks. The Cedar Rapids team “was southpawed to death Sunday by the trusty arm of the redoubtable Zip Zackert” on June 25, with Zackert twirling a 1-0, three-hit shutout.56 (“Zip” and “Zeke” were used as occasional nicknames for Zackert as a play off his surname.) He won a doubleheader on his own against Waterloo on July 7. Soon thereafter, he was named interim manager after skipper Eddie Brennan was suspended for insubordination involving an unauthorized player transaction.57 Sadly, during a home start against Mason City (Iowa), George learned of his father’s death back in Arkansas, and left mid-game for the funeral.58

After being rebuffed as Waterloo’s manager for 1917, Zackert was traded to the Fort Dodge Dodgers of the Central Association. However, he refused to report, and instead lobbied for a position as an umpire in the same league. In the spring, Zackert announced he was “through with baseball,” opting to go “into service at the Rock Island arsenal for Uncle Sam. I don’t ever expect to pitch another game of professional ball.”59

On his draft registration in May, he disclosed that he was a shop foreman at Sears Saddlery. On July 24, 1917, George became “a benedict,”60 marrying Miss Pearl Esther Newby (born 1892), a tri-state women’s tennis champion, from the “Orchard City” of Davenport, in a ceremony in Des Moines.61 The Zackerts welcomed a son, Firson Leithmore Zackert, in 1919.

In 1920, Zackert lived with Pearl’s parents Gabriel and Emma Newby and worked as a retail grocery merchant, with his father Joe working as a salesman for the same grocer. In 1927, he operated a chain tea store, then later the Zackert Grocery Store, in Burlington.62 That store eventually became a Benteco store, of which George was the manager for many years.63 Pearl was a member of the Margaret Bottome circle of King’s Daughters, a philanthropic organization. Firson played junior college tennis. George was fined $50 in 1950 for illegal possession of a hen pheasant.64 In 1956, brother Anthony, a machinist for Rock Island railway, passed away. Five years later, brother Emil, a retired glass and paint dealer, died of a heart attack.65

George Zackert died on February 18, 1977, at age 92, in Burlington, Iowa, due to a stroke, and is buried at the Aspen Grove Cemetery in town. He was survived by his wife Pearl, son Firson, and four grandchildren.

This biography was reviewed by Bill Lamb and Norman Macht and checked for accuracy by SABR’s fact-checking team..

36 “Outfielder Zackert of the Cardinals with Bloomington,” St. Louis Star and Times, May 23, 1912: 6. (Note: listed only as Zackert in Baseball-Reference)