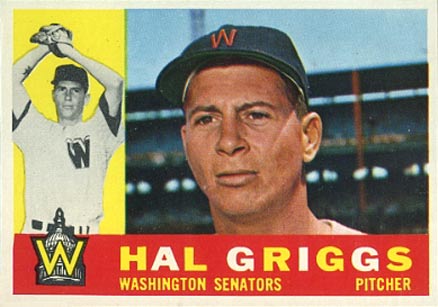 In their work The Great American Baseball Card Flipping, Trading and Bubble Gum Book, first published in 1973, authors Brendan Boyd and Fred Harris looked back on the major-league players of their youth through the prism of their baseball cards. The book, an admixture of childhood reminiscences, statistical analysis, and caustic humor, discusses a wide range of ballplayers, from the game’s all-time greats to its Average Joes. Hal Griggs, a pitcher for the cellar-dwelling 1950s Washington Senators, decidedly fits into the latter category. Next to a photo of his 1958 Topps card, Boyd and Harris wrote of the Nats hurler: “Hal Griggs was to pitching as Wayne Causey was to hitting. That is to say—nothing.”1

After reading Griggs’s big-league stats, it is easy—as Boyd and Harris did— to dismiss him as a pedestrian pitcher on a terrible team. When looking beyond the numbers, however, there is much more to his career, and of course his life, than a 6-26 win/loss record. Harold Lloyd “Hal” Griggs was born on August 24, 1928, in Shannon, Georgia. Named for the famous silent film star Harold Lloyd, young Hal attended West Fulton High School in Atlanta, where he played football.2 Following a stint in the U.S. Coast Guard after his schooling, Griggs made his way to Miami. It was while working as a bellhop in the Sunshine State when a chance encounter with the owner of a minor-league team changed the course of the 21-year-old’s life. The owner invited Griggs to try out for his Hickory Rebels of the North Carolina State League, who were encamped for the spring a few hours north in DeLand, Florida. Despite having never before played organized baseball, he made the squad as a pitcher.3

In his first professional season, 1950, Griggs led his league in losses (21), walks (155), and runs allowed (209). Despite an inauspicious beginning to his baseball career, Hal’s arm was live and durable: his 45 appearances were tops for league twirlers.4 Over the course of his next five campaigns in the minors, Griggs’s raw talents would be harnessed into pitching prowess. As he moved up the ladder from Class D Hickory to Class B Charlotte, and finally to the AA-ball Chattanooga Lookouts, his win totals increased while his ERA decreased. In 1952, he led the Western Carolina League in Ks with 195, and in 1955 he was selected to the Southern Association All-Star team. He finished his ’55 season with the Lookouts sporting a 15-9 record and a 3.79 ERA. His achievements on the diamond, however, were not limited to baseball. Before his team’s game on June 20, 1952, Hal married Betty Robinson on the pitcher’s mound in Hickory. Regarding the site chosen for his nuptials, Griggs responded, “I couldn’t hit, so there was no sense getting married at home plate.”5

The Washington Senators were coming off a 1955 season in which they finished last in the American League, a fact bad enough in itself, but one amplified by the year’s Broadway hit musical Damn Yankees, which centered on a long-suffering DC baseball fan who, in order to deliver his team the pennant, sold his soul to the devil. Meanwhile, legendary owner Clark Griffith’s recent death, declining attendance, and an aging ballpark all further contributed to the malaise infecting the franchise. Looking for a fresh start in 1956, Manager Charlie Dressen’s squad was going to rely heavily upon rookie talent. “I don’t say we’re gonna set the world on fire,” said Dressen, “but I think we’ll have a good, hustling young ball club.”6

One of the youngsters the Nats’ skipper was calling on was Hal Griggs. The six-foot-tall, 170-pound righthander was purchased from Chattanooga, one of Washington’s three minor league affiliates. Griggs made a quick splash during spring training—literally, in one instance, when he and fellow pitcher Bob Chakales drove their golf cart into a lake. Unforeseen swimming excursions aside, Griggs did impress club brass in a March 28 preseason game against the defending AL champion New York Yankees. The Georgia native threw four scoreless innings against the Bombers, before a line drive off the bat of Andy Carey hit Griggs in the foot, forcing him out of the game in the fifth. The St. Petersburg crowd gave the hobbled hurler a round of applause for his performance.7 The Senators, meanwhile, rewarded Griggs with a roster spot for the entire 1956 season.

Griggs’s rookie campaign, however, was not a success. Neither, for that matter, was the Nats’ season. Griggs pitched to a 1-6 record on a seventh-place, 59-95 team. His highlight for the year was his 7-1 complete-game victory on June 3 over visiting Cleveland, when he struck out nine Indians and garnered his first major-league win. His overall numbers, though—including a 6.02 ERA and a 1.99 WHIP—led management to conclude that Griggs was not yet ready for the big show. The subsequent season spent in the minors was well served, as 1957 was Griggs’s finest professional year. Back with Chattanooga, he once again earned Southern Association all-star honors, winning 21 games and posting a 3.34 ERA. His accomplishments in AA-ball led him back to Washington as a September call-up. The Senators’ new manager, Cookie Lavagetto (Dressen had been fired in the spring), decided to start Griggs on the 24th against the Boston Red Sox. Sadly, only 2,598 fans showed up to Griffith Stadium to witness baseball history. Boston slugger Ted Williams entered the day having reached base in 16 consecutive plate appearances, and was looking to extend what was already the all-time record. Facing the living legend in the top of the first, Griggs induced Williams to ground out to second, ending his incredible streak. The Splendid Splinter, however, got his revenge in the fourth, leading off the inning with a home run. Griggs pitched brilliantly that afternoon—he scattered six hits and struck out nine in eight innings—but Williams’s solo shot proved the decisive blow as the Sox took the game, 2-1.

Fortunately for Griggs, there would be no return trips to the minors in the 1958 and 1959 seasons. Hal remained in the Nation’s Capital, where he was earning quite a reputation in the clubhouse. According to one publication, he “kept the club’s spirits high with his sense of humor.”8 Griggs’s travel roommate and fellow pitcher Russ Kemmerer concurred. “He was a fun guy to be around,” said the hurler, “A prankster.”9 Another Washington pitcher, Dick Hyde, described Hal as a “good easy going southern boy….[who] liked his night life.” 10 In the dugout, the nocturnally-active Griggs proclaimed his carefree philosophy: “I’m only going to be here once on this earth, and I’m really going to live it up.”11 One sportswriter called Griggs “a character in the Ring Lardner mould,” a reference to the famous satirist who wrote about the comic exploits of pitcher Jack Keefe and teammates in his novel You Know Me Al.12 Given Griggs’s transformation from bellhop to ballplayer and marriage on the mound, Lardner’s baseball stories seem believable by comparison.

The Senators would need all the humor and cheer they could get in the late 1950s, as three consecutive last-place finishes from 1957-59 cast a pall over the team. When asked by a reporter in spring training about his club’s prospects for the 1958 season, Lavagetto said, “I’m optimistic.” However, a few moments later he added, “In this business you have to talk with a forked tongue. You can’t always tell the straight story.”13 A lack of quality arms hindered the team throughout these losing years. Perhaps no player exemplified the problems of the Washington pitching staff as did lefthander Chuck Stobbs. The southpaw already had the dubious distinction of being the man who served up Mickey Mantle’s 565-foot Griffith Stadium blast in 1953. Four years later, his 20 losses were bottom on the league’s worst starting rotation. Griggs’s stats, it can be argued, were even poorer. Following his two-start call-up in 1957, the righty finished the 1958 campaign with a 3-11 record and 5.52 ERA, and followed that year up in ’59 with a 2-8, 5.25 performance. Griggs was utilized both in the rotation and the bullpen, with equally unsatisfactory results. Hal’s disappointing 1959 season would prove to be the hurler’s last in the bigs, but his final victory was a major-league masterpiece. In a May 9 start at Yankee Stadium, Griggs allowed just one walk and two hits in a 7-0 blanking of the Bombers. He struck out five hitters, including Mantle.

Griggs went on to lose his final eight decisions that season, finishing up his career in the majors with a total of 6 wins and 26 losses, a 5.50 ERA, 1.67 WHIP, and 25 more hits allowed (372) than innings pitched (347). In his remaining four years in professional baseball, Griggs bounced around the minors, including stops in Charleston, Macon, and Syracuse, and return trips to Charlotte and Chattanooga. His last two pro seasons were spent in the AAA Pacific Coast League with the Hawaii Islanders, where the righty was used almost exclusively in relief. After a winter pitching in the Nicaraguan League for Cinco Estrellas, the 35-year-old Griggs decided to hang up his cleats in late 1963.

In retirement, he traded his baseball glove for golf clubs. He first took up the leisurely sport in the ’50s, after giving up on hunting because he felt pity for the animals.14 Moreover, Hal could hold his own on the greens. At the 23rd Annual National Baseball Players’ Golf Tournament, held at Miami Springs Golf Course, Griggs competed against big-league talent including Sandy Koufax, Duke Snider, and Maury Wills. The erstwhile Senator was only a shot off the lead after day one of the two-day February 1963 event. He finished with a respectable 36-hole 160, 12 shots behind tourney winner Virgil Trucks.15

Griggs, like most players from baseball’s golden age, did not become a wealthy man from our National Pastime. Following his retirement from the game, he gained employment in various fields, including sales, construction, and building maintenance.16 On the home front, after 15 years and four children together, Hal and Betty filed for divorce in Broward County, Florida in May 1967.17 Griggs then left Pompano Beach for Port Huron, Michigan, where he met Elizabeth Jane “Libb” Scott. The couple moved to Tucson in 1969, and officially tied the knot on September 10, 1976 in Las Vegas.

The former pitcher’s flurry of address changes, meanwhile, had thrown the Major League Baseball Players Alumni Association off his trail, and Griggs was regarded as one of the “missing” ballplayers. In a July 1993 Sports Illustrated feature entitled “What Ever Happened To… Hal Griggs,” writer Hank Hersch detailed the failed efforts of Jack Smalling, co-author of The Sport Americana Baseball Address List, in locating the Georgia native. It was Griggs’s daughter Lora who saw the article and wrote to the magazine, explaining that her father was retired and living in Arizona. When SI finally got in touch with him, Griggs said he had no idea he was missing. Channeling Yogi Berra, Hal quipped, “Everybody I know knows where I am.”18

Griggs lived out the remaining years of his life with Libb in Tucson. He died at age 76 on May 10, 2005, and was followed to the grave by his wife the following March. His baseball career, of course, amounted to more than “nothing”—Griggs left a legacy of laughter in the clubhouse and is fondly remembered by his former teammates. Although this “good ol country boy” compiled subpar statistics, his life in baseball was certainly anything but ordinary.19

4All minor and major league statistics were obtained from http://www.baseball-reference.com. Going forward, these stats will not be noted.