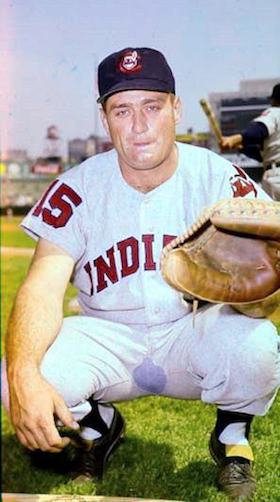 Young boys playing stickball on the streets and pick-up baseball in the fields of Kincaid, Illinois, in the years following World War I probably didn’t spend a lot of time thinking about what the world would be like three decades into the future. It’s probably doubtful as well that young Harry Chiti would have been able to predict that his pal, Emil Leonard, would go on to become a Major League baseball player, pitching for four teams over a 20-year career that would come to a close 220 miles away with the Chicago Cubs. It’s even harder to imagine that young Harry could envision that he would have a son, Harry Jr., who would also become a professional ballplayer, spending his first three years as a catcher on that same Cubs team where his father’s childhood friend ‘Dutch’ Leonard was winding down his career as a pitcher.

Often referred to and remembered as the first baseball player ever traded for himself, which may or may not be true, there was much more to the career of Harry Chiti. His grandparents had come to America from Massa Marittinio in the Tuscan region of Italy three years before his father was born. Harry Dominic Chiti Jr. was born November 16, 1932, in Kincaid, Illinois, to Harry and Clara Chiti. Before long, the family moved to Detroit, where Harry Sr. joined his brothers working in the auto industry. Surrounded by family, Harry Jr., grew up with his younger brother Eugene, mother, father and Uncle James in the eight-person household of his Uncle Boero and Aunt Arnita Chiti, and their daughter Corianne. The rented house at 185 12th Street was a 10-block walk from Northwestern High School, where young Harry began his schoolboy baseball career as an error-prone (24 in 11 games) third baseman.

Moved behind the plate as “it didn’t take Coach Sam Bishop of Detroit’s Northwestern High long to discover that he was no George Kell,”1 young Chiti hit .650 as the team’s catcher in his senior year of 1950. Also excelling as a baseball player for Hudson Local #41 in the Detroit Amateur Federation, the 6’2” 221 pound right-hander was heavily recruited right out of high school. Chiti was contacted by the Chicago White Sox, New York Yankees, Boston Red Sox and Cleveland Indians, as well as his hometown Detroit Tigers, who played their home games less than three miles from the diamonds of Northwestern High. National League teams showing interest included the Brooklyn Dodgers, Philadelphia Phillies, New York Giants and Cincinnati Reds. But it was the bonus offered by the Chicago Cubs, at that time the largest ever paid by that organization, reportedly $20,000 that got 17-year-old Chiti to sign on June 29, 1950, only weeks after graduation.

Chiti appeared in 50 games. A .317 batting average in 161 at-bats earned him selection as the catcher on the Western Association’s All-Star team, as well as a September call-up to Chicago where he made his major league debut on September 27. After two pinch-hit appearances in September, Chiti started the 1950 season finale on October 1 at Sportsman’s Park, St. Louis. Going 2-for-4 at the plate, Chiti, wearing uniform number 32, which had belonged to his father’s childhood pal Dutch Leonard the previous season. He later caught Leonard in a couple of games..

Chiti spent 1951 in the minors while Chicago’s backstop duties were handled by Smoky Burgess, Bruce Edwards, Mickey Owen and Rube Walker. Appearing in 99 games at Class A Western League Des Moines and 12 more with Chicago’s AAA team in Springfield, Chiti again earned a September call-up to the Windy City. There the young catcher finished the season with a .355 batting average, going 11 for 31 in his nine appearances in the 12 days that closed out the season.

Chiti spent most of the 1952 season with Chicago, starting 30 of his 32 appearances and hitting.274 in 113 at bats. The Korean War interrupted Harry Chiti’s career for two years. He returned in 1955 and hit .231 with 11 of his 41 career home runs in 113 games for the sixth-place Cubs. After a disappointing ’56 season, Chiti was traded to the Yankees for catcher Charlie Silvera. He spent the ’57 season with the Yankees’ AAA Richmond Virginians, and was selected by the Kansas City Athletics in the Rule 5 Draft, remaining with them until July 26, 1960, when Detroit bought him for $20,000. Specifically obtained by Detroit President Bill DeWitt “for his bat,”2 Chiti hit .163 in 37 games and in 1961 saw action in only five games with Detroit, spending half the season at AAA Denver. He was subsequently traded to Baltimore and assigned to their International League team, the Rochester Red Wings.

Traded by the Orioles to Cleveland after the 1961 season, Chiti was sold to the expansion New York Mets on April 26, 1962. Harry Dominic Chiti, Jr., played in his last major league baseball game on the afternoon of Sunday, June 10, at Wrigley Field. Five days later the Mets attempted to return him to the Indians and were advised by the organization to send him directly to Jacksonville, a Cleveland affiliate. It was Chiti himself who later claimed that the Mets had owed Cleveland a “player to be named later,” and he had been returned to Cleveland as that player, thus becoming a player who had been traded for himself. Interviewed by sports reporter (and later official historian of MLB) Jerome Holtzman, on August 31, 1987, about becoming part of the history and lore of baseball as ‘the player to be named later,’ Chiti rhetorically asked his interviewer,

“If they don’t know who they want, then what’s the sense of making the trade?”3 “There was more to it than that” Chiti continued, “Cleveland got enough money out of the deal to build a new scoreboard.”4

Chiti finished the 1962 season hitting .335 in 70 games with the Jacksonville Suns of the International League, where he returned in 1963, before being assigned to the AAA Toronto Maple Leafs, the farm team of the Milwaukee Braves. Playing for a Maple Leafs team that added a second MLB affiliation with the Washington Senators and would later be recognized as “long on experience as 20 of the 22 position players made the majors”5, Chiti left professional baseball after appearing in eight games in the 1964 season. After baseball, Harry Chiti worked as a district manager in movie distribution for Columbia Pictures. He moved to Bartlett, Tennessee and worked in the courts in and around Memphis as a Shelby County Deputy Sheriff. He retired to Winter Haven, Florida, in 1998.

Harry Chiti died on January 31, 2002, at Heart of Florida Hospital in Haines City at the age of 69. He was survived by his wife Catherine, daughter Cindy, son Harry, a former minor league pitcher and eight grandchildren. He is buried at Rolling Hills Cemetery in Winter Haven.

Elliott, Bob. “Sparky Anderson was the face of baseball in Toronto for 5 seasons”