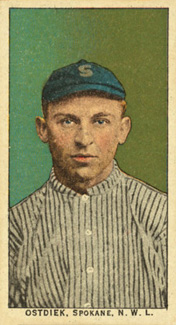 Catcher Harry Ostdiek had two brief looks at major-league baseball. He played in seven September games for the 1904 Cleveland Naps and in one game for the 1908 Boston Red Sox.

Ostdiek did play in 851 minor-league games over 11 seasons from 1903 to 1913, beginning his career in Indiana with the Fort Wayne Railroaders of the Central League. He played in 89 games for Fort Wayne with a .222 batting average, considered good for a catcher in those times. He slipped to .176 in 1904 but worked 112 games behind the plate. Fort Wayne won the pennant both years – by a squeaker (one game over South Bend) in 1903 but by 10½ games over Terre Haute in ’04. There was one bizarre game worth noting, on June 24 against visiting Evansville. Rain almost stopped the game in the fourth inning; with Fort Wayne leading 8-1, the Evansville players wanted to prolong the game until – they hoped – it was rained out. Fort Wayne batters were swinging at anything to make outs and speed things up, but Ostdiek got a home run on an intentional wild throw – and a few minutes later, the rains ceased.[fn]Sporting Life, July 9, 1904.[/fn] Just three weeks earlier, his career had been threatened when he was hit in the right eye by a pitch. At season’s end, he had the opportunity to play in the major leagues.

Ostdiek’s debut in the majors was in the second game of a September 10, 1904, doubleheader in Cleveland. He batted ninth in the order, catching right-hander Earl Moore, who gave up a couple of runs before handing the ball over to left-hander Otto Hess in the fifth. Cleveland had won the first game, 5-4, scoring three runs in the bottom of the ninth, and won the second game, 11-6, thanks to seven runs scored in the first inning. Ostdiek had one hit, a triple, and scored once. Box scores – though not his current official statistics – show him doubling in the second game of the September 20 doubleheader.

He appeared in seven games, with 22 plate appearances, all in September and none in the team’s 11 October games. He walked three times and struck out four times, and was 3-for-18 at the plate (.167), but with a .318 on-base percentage. In 1905 he was back with Fort Wayne, and things fell apart for the Railroaders. The team started with the same manager – Bade Myers – but suffered in the standings, and after a 31-41 start even shifted the franchise to Canton. George Williams took over as manager. The team finished in seventh place at 56-79. Ostdiek’s final statistics for the year are not known. Had his father moved the family to Fort Wayne? A note in Sporting Life said that Harry would work in the offseason, assisting his father in managing the Berry Cafe in Fort Wayne.[fn]Sporting Life, October 28, 1905.[/fn]

Bade Myers was back as manager in 1906, though the team remained in Canton, now known as the Canton Chinamen(!), and climbed back to third place. Harry Ostdiek began the season with Rochester, but was released during the first week in May and joined the Chinamen, hitting .219 in an even 100 games.

He was born as Henry Girard Ostdiek in the southeastern Iowa city of Ottumwa on April 12, 1881. His father, Herman, and mother, Mary, both had German ancestry. Herman was an Iowan by birth but both of his parents were German immigrants. Mary and her father were both Illinois natives but her mother came from Germany. Harry was (it seems) their second oldest child, followed by Christopher, Mary, Bertha, Otto, Clarence, Paul, and Hermania.

In 1900, when Harry turned 19, he was living at home and worked as a shipping clerk. Ottumwa had doubled in size in the 20 years from 1880 to 1900, and its population was 18,000 at the turn of the century. Harry’s father, Herman, was a wholesale manager. Ten years later, the family had moved to Minneapolis and Herman is listed in the 1910 Census as an “agent, importing,” and that seems to have perhaps been at a family firm. Harry’s older brother John had returned to the family and was also working as “agent, importing” while Otto was a salesman and Clarence was a clerk. Harry was not listed with the family, or otherwise, but was with the Spokane ballclub from 1909 through 1913.

It was Youngstown in 1907, where he played for the Champs. Harry had signed with them in January. Youngstown had taken on the name Champs after winning the Ohio-Pennsylvania League pennant in 1906. They won it again in 1907. Ostdiek had put in his name to be considered as manager for the team, but it was not to be.

Boston Americans scout Fred Lake signed Ostdiek to a Boston contract in November 1907. He didn’t play much in 1908. He’d been taken to spring training but a deal was struck and he started the season with Harrisburg, and then almost immediately found himself with Trenton, from which he was released after coming up with a lame arm – all before May was done. Ostdiek played for Hugh Duffy’s Providence Grays, but in only 27 games (batting .250), and by mid-August he was gone from Providence. Apparently, all these moves were made under his Boston contract and Fred Lake (who had taken over as manager for the Red Sox) wanted to give him a look in the big leagues. Harry was brought to Boston.

His only other major-league game besides those for Cleveland was the very last of the 1908 season, the first year that Boston’s AL team was named the Red Sox. Harry had watched the Red Sox beat the Athletics 10-1 in the first game, behind Eddie Cicotte. He caught the second game, a 5-3 loss for batterymate Cy Morgan and a win for Philadelphia’s Eddie Plank. Morgan did strike out six. Ostdiek was charged with a passed ball. He had three at-bats without a hit, striking out twice.

For the rest of his career, from 1909 through 1913, Ostdiek worked in the Northwestern League for the Spokane Indians. The Red Sox had sold his contract to the Washington State club for a reported $1,000.[fn]Spokane Spokesman-Review, November 14, 1908.[/fn] Ostdiek hit .193 for manager Robert Brown in 1909; the team finished in second place in the six-team league. In 1910 the league shrank to four teams. Ostdiek became the manager of Spokane and the Indians finished in first place, though he himself hit just .139 in 58 games. The Northwestern League expanded back to six teams in 1911, and Ostdiek’s Spokane team placed second. He hit .235 in 63 games. Come 1912, he assigned himself even more playing time – 83 games, hitting for an identical .235 and seeing his charges finish second once again.

Ostdiek’s last year in baseball was with Spokane again in 1913. He started the season as the skipper once again, and played in 21 games, but the team was destined for last place and Ostdiek resigned his position on June 12; before the year was out, Spokane was on its third manager. And Ostdiek was umpiring in the Northwestern League, working games in which his former team played.

Until Tim Hulett surpassed Ostdiek’s tenure in 2011, he had managed Spokane longer than any other in the city’s very long professional history. He still ranks first in career victories managing Spokane, with 308.

He was reportedly offered a contract by the Victoria team for 1914, but it doesn’t seem that he ever worked in baseball again.

By the time Ostdiek registered for the draft in 1918 at the time of the World War, Harry was back in Minneapolis and listed as credit and traffic manager, The Ostdiek Importers and Jobbers. In August 1911 he had married Mabelle Frost Bender, born in Nevada of parents from Nevada and Missouri. They had a son, Harry, who had been born in Washington during the Spokane years.

In 1930 the three still lived together, with young Harry now 17. Harry the former ballplayer was now a broker in investment securities – in the year after the stock market crash.

For whatever reason, we can’t find Harry in 1940, though Mabelle was living by herself, listed as head of the household, and working as a teacher and as a bridge hostess in a hotel. They had divorced during the 1930s. SABR member Jim Price reports that Harry apparently lost his shirt in the field of investments after the stock-market crash. He drove race cars for a bit and a grand nephew, John, owned two short track facilities in the Minneapolis era for many years. The family was honored at one of them in 2012.[fn]E-mail from Jim Price, December 4, 2012.[/fn]

In addition to the sources noted in this biography, the author also accessed Ostdiek’s player file and player questionnaire from the National Baseball Hall of Fame, the Encyclopedia of Minor League Baseball, Retrosheet.org, and Baseball-Reference.com. Thanks to Jim Price for several corrections to an earlier draft of this biography, and several suggestions for improvement.