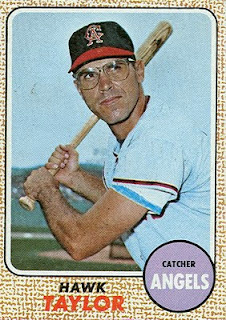 Metropolis, Illinois, is the hometown of Superman, the comic-book character who leaps tall buildings in a single bound. Back in the day, Robert Dale “Hawk” Taylor was the genuine article when it came to baseball.

Unlike mild-mannered Metropolis Daily Planet reporter Clark Kent, who left his office, entered a phone booth and came out as the Man of Steel, Hawk Taylor stepped off the local baseball field and into his high-school graduation gown, then shed the gown and received a “basket of gold,” as Philadelphia Daily News columnist Sandy Grady put it. At 4:30 a.m. on Saturday, May 30, 1957, just hours after graduating from Metropolis High School, Taylor signed a contract with the Milwaukee Braves for a $6,000 salary and a total bonus of $119,000, at the time the richest-ever deal for a baseball rookie.i

Robert Dale Taylor was born on April 3, 1939, in Metropolis, a small town in extreme southern Illinois across the Ohio River from Paducah, Kentucky. He was the oldest of the five children of Vance and Velma Taylor, followed by sisters Sue, Carol, and Jo Ellen, and brother Johnny. Robert got his nickname, Hawk, as a child because his favorite movie serial was “Hawk of the Wilderness.” His father, Vance, was a truck driver with a route from Metropolis to Kankakee, Illinois. An uncle, Benny “Bleek” Taylor, played for the St. Louis Browns in 1951, the Detroit Tigers in 1952, and the Milwaukee Braves in 1955.

Robert started playing baseball when he was 8 years old in the Khoury League, an age-based organization that started in the 1930s around St. Louis and spread widely. By the time he was 12 he was playing on local teams with his uncles. At 13 he was being watched by scouts because of his ability to run, throw, and hit with power. As a senior for the Metropolis High School Trojans, Taylor batted .650 with 10 home runs in a 14-game season. He slugged 21 home runs in his four years on the team, including one that cleared the roof of the local ballpark. In his high-school years he won varsity letters in baseball, football, and basketball, and captured eight medals in two years of track and field competition that included a conference championship in the 100-yard dash. As a junior on the basketball team, Taylor set a single-season scoring mark of 630 points, including 43 points in one game. He had a baseball scholarship offer from the University of Illinois.ii

Most major-league teams scouted Taylor. The bonus rule in effect at the time required that any player signed for more than $4,000 had to stay on the major-league roster for two seasons. The Milwaukee Braves won the bidding contest for Taylor because they offered more money than the Brooklyn Dodgers. The Dodgers’ bid, made over the telephone, was $98,000. Braves scout Wid Matthews, a resident of the area and a friend of the family, topped the Dodgers’ bid by $1,000, and added $20,000 for Taylor’s father, Vance. Hawk had originally expected to sign with the Philadelphia Phillies but later told sportswriters, “It was a tossup between the Dodgers and the Braves. … I chose the Braves.” The St. Louis Cardinals had made an $80,000 offer but had insisted that Taylor try out at Busch Stadium first.iii

Because of his instant riches, Taylor became an instant celebrity. The Metropolis News carried banner headlines, lengthy articles, and congratulations from well-wishing merchants and organizations, and predicted that there would eventually be such things as an annual Hawk Taylor Day, a Hawk Taylor Street, and Hawk Taylor sodas, and wrote, “He’s had six marriage proposals and a guy from New York wants to sell him a $125,000 hunting and fishing lodge.” Vance Taylor told the Milwaukee Journal that spreading the bonus over five years saved $18,000 in taxes.iv

Sportswriter Bill Harris of the Paducah Sun Democrat wrote that local fans would be able to see Hawk in action when the Braves played the Cardinals in night games on July 1 and 2. The community organized bus trips for the games in St. Louis. The Braves and Cardinals were also scheduled for the NBC Game of the Week on July 22 and July 29, which would be on local TV. “While watching the Braves on television look for number 19,” Harris wrote. He also noted that Benny Taylor, Hawk’s uncle, had signed a contract to manage Johnson City (Tennessee) in the Appalachian League.v

Through it all, Hawk was thrilled but humble. “When you’re in baseball, there’s only one place to be and that’s the majors,” he told local writers. Upon his arrival with the Braves on June 4, he acknowledged that he had much to learn and that his money would go into the bank as he earned it. Braves manager Fred Haney had said Hawk would get an opportunity to play when the manager thought he was ready.

As it turned out, Taylor played little for Milwaukee in its world-championship 1957 season or in several seasons thereafter. On June 9 he made his major-league debut by pinch-running against the Pittsburgh Pirates, and on the 12th he caught for an inning against the Dodgers. But the World Series was the ultimate experience of Taylor’s half-season of thrills. “Right out of high school, I was rubbing elbows with a team that had four Hall of Famers,” he told this writer in an interview at his home in April 2011. “Guys that I had posted on my bedroom wall. It was just a dream come true.” And the Series victory? “It was an overwhelming sensation,” he reflected. “I thought, ‘This is the way it’s supposed to be.’ I took it for granted that this was big-league life.”vi

But big-league life became minor-league life very quickly. The bonus rule was rescinded in 1958, and Taylor played most of that season at Cedar Rapids of the Class B Three-I League, batting .297 with 22 home runs and earning a late-season promotion to Class A Jacksonville and then a brief call-up to the Braves during which, on September 27, he got his first major-league hit, a double off Cincinnati’s Ted Wieand. In 1959 Taylor played in 99 games for the Atlanta Crackers of the Double-A Southern Association, batting .297 but with just four home runs. In 1960 he had what he called his most satisfying professional season. He played left field and caught for the Junior World Series champion Louisville Colonels. He batted cleanup, hitting 17 home runs with 80 RBIs and a .270 batting average. (His Milwaukee bonus-baby teammate John DeMerit played right field and hit .268 with 12 homers and 50 RBIs.) The Louisville fans voted Hawk the most popular player on the Colonels, who beat the favored Toronto Maple Leafs of the International League in six games.vii

Ready for another shot at the majors in 1961, Taylor instead was called up to serve in the Army for six months because of the Berlin Crisis, then, after playing in 20 games in 1961, was called up for a second military hitch, and didn’t return to the Braves until September 4, 1962. On that day he was sent up to pinch-hit for Warren Spahn and singled. On the 15th, playing right field in place of Hank Aaron, Taylor ripped five singles, scored a run, and drove in another in a 9-8 win over the Houston Colt .45s. He finished the season batting .255 in 47 at-bats.

Taylor and his wife, Marie, were married in Brookport, Illinois, in October 1962, right after the end of the season. After a honeymoon cruise, Taylor played winter ball in Puerto Rico until just before Christmas. In 1963 he had his best chance to start for the Braves. He had the left-field job won in spring training, batting .353 in six games (“I was hittin’ the dickens out of the ball”) when a fluke injury sidelined him for most of the season. Replacing Eddie Mathews at third base in a spring-training game on March 17 against the Minnesota Twins, Taylor got in front of a sharp, top-spinning ground ball hit by the Twins’ John Goryl. The ball took a high hop and struck Taylor, breaking his collarbone. Expected to be out four to six weeks, Taylor recovered slowly and had only 29 at-bats during the season, with two hits. After the season the Braves sold Taylor to the Mets, calling their can’t-miss prospect “a $119,000 dud.”viii

Taylor saw more action with the cellar-dwelling Mets, playing in the first Opening Day at Shea Stadium, but Casey Stengel’s platooning system made him a part-time player. “I would go 4-for-5 with a home run and not play for two weeks,” Taylor recalled. After spending most of his time on the Mets’ bench for two seasons, he was traded in July 1967 to the California Angels, and after spending most of his Angels tenure in the minors, he was picked up by the brand-new Kansas City Royals in the Rule 5 draft after the 1968 season. In 1969 he had 49 pinch-hitting appearances for the Royals. The leagues had begun thinking about a designated-hitter rule, and Royals manager Joe Gordon said that if the rule was adopted, Taylor would be the perfect man for the job. After another season as a pinch-hitting expert and a brief minor-league stint at Louisville as property of the Boston Red Sox in 1971, Taylor hung up his playing spikes and returned to school. In 1972 he earned two degrees from Murray State University in Murray. Kentucky – a bachelor’s in health/physical education with an emphasis on general business, and a master’s in health/physical education and recreation. (He had straight A’s in his master’s program) For three years he taught physical education and coached baseball at Lambuth College in Jackson, Tennessee, then taught and coached at the high-school and junior-college level in Paducah, Kentucky. He worked in the insurance business for a time, and then retired to Murray with no regrets. “I took my retirement seriously,” Hawk said, “and when you look out that window there, it’s not hard to do.”ix

The last few years of Taylor’s life were filled with medical concerns, some of which were dealt with by trips to the Mayo Clinic in Rochester, Minnesota. Taylor improved but needed to take daily rest periods. When I visited with him and his wife, Marie, at their home in Murray on April 20, 2011, Hawk was in good spirits and articulate as he recalled memorable moments in his baseball career.

Hawk Taylor died on June 9, 2012, at Western Baptist Hospital in Paducah, Kentucky, at the age of 73 after battling a series of illnesses that included irregular heartbeat, fibromyalgia, gall-bladder surgery and sleep apnea. He was survived by his wife, Marie Taylor, a pianist and retired music instructor at Murray State University; two sons, Sam and Bruce; and a younger brother, Johnny “Bubber” Taylor.x

“My hitting and versatility helped my longevity,” Taylor said of his professional career, which spanned 15 seasons. “I didn’t make the good money.” After the bonus year, his highest annual salary in baseball was $25,000. On the game’s future, he was optimistic, saying, “Baseball is as healthy as it’s ever been. It’s done something right.”xi

The same can be said for Robert “Hawk” Taylor. He took advantage of opportunities, responded to adversity, and put his life in perspective. Even with the kryptonite of baseball injuries and a string of illnesses later in life, Hawk may not have been the Man of Steel but he was a super man.

Besides the sources listed in the notes below, information for this biography came from a personal interview with Hawk Taylor on April 20, 2011, material from his scrapbook, and communications from Marie Taylor, Hawk’s widow.

ii Taylor interview; Hawk Taylor scrapbook (basketball point totals from every game in the 1955-56 season for the Metropolis Trojans).