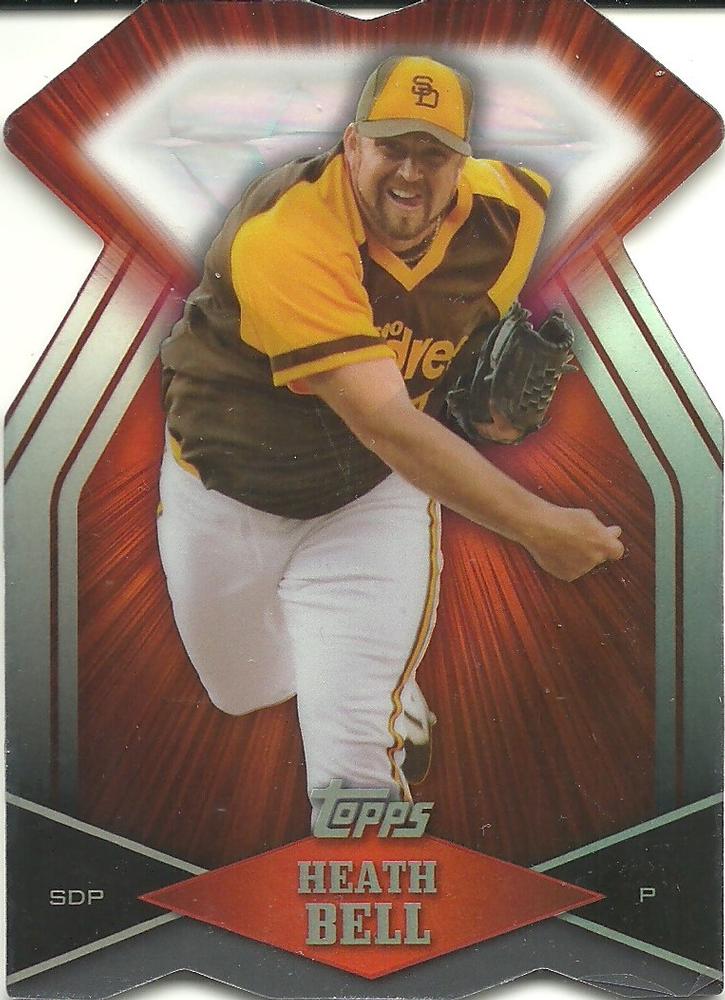 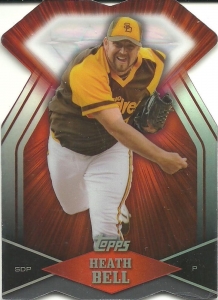 “I want to give it my all and teach my kids you can get knocked down and people can say you’re no good, you’re old, blah blah, but if you have passion, you can work really hard and you can go and give it your all, and if it doesn’t work out, at least you can hold your head high.”1

Former All-Star Heath Bell uttered these words in March 2015 as he made one final attempt to extend his career with the Washington Nationals. He’d shed 30 pounds after a poor showing for the Tampa Bay Rays in 2014, but the Nationals ultimately decided the 37-year-old from Oceanside, California, didn’t fit in their plans and released him just before Opening Day.

Bell retired knowing he gave it his all and was able to hold his head high, teaching his four children an important lesson in the process. And although in a perfect world he would have left the game on a higher note, he could at least point back to past successes in a league and a sport where failure is far more common.

Born on September 29, 1977, to Jimmie and Edwina Bell, Heath Justin Bell grew up in Tustin, in Southern California, about 50 miles northwest of his birthplace.2 At Tustin High School, which also produced former big leaguers Mark Grace and Shawn Green, Bell lettered in football, basketball, and baseball.3 It was there that he developed habits that would last a lifetime.

Bell credited his father, a former Marine and auto mechanic whose busy schedule wasn’t always conducive to raising a family but who found ways to make it work, for setting a good example. Despite Jimmie’s long hours, hae always made time for Heath: “My father worked his butt off. But if I wanted to go play catch, he could be half-asleep on the couch and he’d go play catch.”4

Following his father’s lead, Bell decided to be present for his own children despite whatever else might be going on in his life. For example, while with the Padres, he biked to school with them. As he told the San Diego Union-Tribune in 2011, “I saw how my dad was, and I thought he was absolutely the coolest father.”5

Jimmie’s work ethic also passed from father to son, serving Heath well as he defied coach after coach who told him he probably wouldn’t reach the next level. Undrafted out of high school, Bell attended nearby Santa Ana College (known briefly as Rancho Santiago College during his time there), which also produced entertainers Steve Martin and Diane Keaton.6

Bell went 8-0 with a 2.17 ERA and nine saves for the Dons as a freshman en route to being named the Orange Empire Conference Co-Pitcher of the Year in 1997.7 He added 12 saves as a sophomore. Although those two seasons would eventually lead to his 2010 induction into the Santa Ana College Hall of Fame, his junior-college success guaranteed nothing in terms of a professional career.8

Again defying his doubters, Bell was selected by the Tampa Bay Devil Rays in the 69th round of the 1997 draft. The 1,583rd of 1,607 players taken that year, he did not sign, later recalling that when the Devil Rays made an offer, “I actually forgot I got drafted.”9 Instead he signed with the New York Mets as a free agent the following summer, starting his career at Kingsport of the Appalachian League, where he posted a 2.54 ERA and led his team with eight saves.

Bell was promoted to Capital City of the South Atlantic League in 1999 and enjoyed another strong campaign, again leading his team in saves, this time with 25. A year later and a level higher, it was more of the same: 23 saves for St. Lucie of the Florida State League. By this point Bell had played three professional seasons, finishing with an ERA under 3.00 and leading his team in saves each year.

But baseball wouldn’t prove to be so easy in 2001. Bell struggled, posting a 6.02 ERA and earning only four saves with Binghamton of the Eastern League.

Meanwhile, Bell’s life changed in other ways. He married his wife, Nicole, and adopted her young daughter, Jasmyne. Heath and Nicole had three children of their own: Jordyn, born with Down syndrome (“our blessing in disguise”10), Reece, and Rhett.

Back on the field, Bell responded with a stellar return to Binghamton, notching a 1.18 ERA and six saves before a midseason promotion to Triple-A Norfolk. He enjoyed less success at the higher level and again posted pedestrian numbers in a 2003 encore but now found himself just one step away from the big leagues.

From 2004 to 2006, Bell rode the proverbial shuttle between New York and Norfolk, often needed for stretches but never quite able to stick. And while his Triple-A performances dazzled, his stints with the Mets — with irregular roles and usage — didn’t go so well. In 81 appearances with the Mets, he posted a 4.92 ERA and zero saves.

By the end of his tenure in New York he was already 28 years old, an age when most players have either established themselves or started preparing for their next career. As Bell later noted, even his family was ready for him to move on: “At that time, my wife was telling me to quit.”11 But, as usual, he persevered despite the odds against him.

Bell might not have endeared himself to Mets management by riding Rollerblades to spring training in an attempt to get into better shape. As Mets pitching coach Rick Peterson told the New York Times in 2005, “How many times do you hear about someone falling off? You can’t motorcycle or sky-drive or go cliff-jumping in Mexico, and you shouldn’t do this, either.”12 (Years later Bell recalled Peterson’s displeasure and conceded that his training methods weren’t necessarily the best.)13

Bell received a new lease on life when the Mets traded him and fellow reliever Royce Ring to the San Diego Padres for reliever Jon Adkins and outfielder Ben Johnson. Returning to the West Coast, Bell immediately thrived as Trevor Hoffman’s set-up man in 2007, posting a 2.02 ERA in 81 appearances and fanning 102 batters.

Bell also became a legend in the Padres clubhouse, known as much for his zany antics (he was fond of flying remote-control helicopters in the clubhouse) as for his prowess on the mound. As then-teammate Jake Peavy said, “He is in his own world. And it is going to get worse because Heath is really good.”14

Bell slipped a bit the following year in the same role, but when Hoffman departed for Milwaukee via free agency after the season, Bell filled the Hall of Fame closer’s shoes with aplomb, leading the National League with 42 saves and being named to the All-Star team. Perhaps not coincidentally, he’d lost 30 pounds before the season. This time, instead of using Rollerblades to get himself into shape, he used a Nintendo game called Wii Fit that his children had been playing.

Bell cleared the 40-save mark again in 2010 and 2011, making the All-Star team each time. At the 2010 midsummer classic, in Anaheim, Bell brought his father — then fighting lung cancer — to sit with him during media appearances and share the experience. It was the least he could for someone who had always made time for him: “He says he’s a proud father. I’m a proud son.”15

In his third and final All-Star Game appearance, Bell sprinted in from the bullpen as usual before sliding into the pitcher’s mound and retiring the only batter he faced. When asked about the slide, Bell said, “I wanted the fans to have fun with this. The fans are really what matters. They’re the ones that show up. They’re the ones who pay our salary.”16

After the season Bell became a free agent and signed a three-year contract with the Florida Marlins.17 He got off to a rough start with his new team, blowing three of five save opportunities in April 2012, and never recovered. He lost his job as closer after the All-Star break18 and found himself publicly locking horns with manager Ozzie Guillen.19 During his struggles Nicole reminded him how much he had already overcome in life and that he would get through this difficult time as well.20

The Marlins traded Bell to Arizona in October 2012 and he again stumbled with his new team, allowing two home runs in his Diamondbacks debut before posting a 2.22 ERA over his next 25 appearances, notching 11 saves along the way. He held onto the closer role for another month before blowing his fifth save on July 10 and losing his ninth-inning job. Bell finished the season on a fairly strong note, albeit in a lesser role.

In December 2013 Bell found himself on the move once more, this time to Tampa Bay, the team that had originally drafted him. Bell’s Rays career lasted 13 games; he was released on May 10, 2014, a week after allowing three runs in what proved to be his final big-league inning.

The Orioles signed Bell on May 18 but released him less than a month later after just 10 appearances at Triple-A Norfolk. He then spent 11 days in the Yankees organization, again at Triple-A, before being released on June 24 and sitting out the rest of the season. The Washington Nationals signed Bell in December 2014 but released him at the end of 2015 spring training. Even during his brief time with the Nationals, Bell had become known for his free-spirited nature, from making his own smoothies because “I don’t like eating my vegetables” to wearing Star Wars sneakers around camp.21

By this time Bell had spent 11 seasons in the major leagues and made three All-Star teams. He’d led the National League with 42 saves in 2009 and finished with 168 in a career that included 590 appearances (all in relief) and a 3.49 ERA — not bad for a guy who repeatedly wasn’t supposed to reach the next level but did it anyway.

Although it seems this could be where the story ends, it isn’t. In 2016 and 2017 Bell pitched for the independent league Kansas Stars, playing alongside several other former major leaguers. As he told the Wichita Eagle, “I’m just here having a good time. I came here last year and had a great time talking with fans. This year I’m a little more comfortable. I want to be a personable player, not a big leaguer, I guess you could say.”22

In 2018 Bell played with more former big leaguers for the Louisville Stars in a week-long tournament called the Bluegrass World Series.23 As he told San Diego radio station Mighty 1090, his arm felt good: “I don’t pitch as much, but last year I was still throwing 92-94, so I can crank it up for a little bit here and there.”24

These days, Bell saves most of his fastballs for his older son: “He’s 14 now, so for the last three years I’ve been throwing batting practice three times a week to his whole team.”25 When he isn’t coaching his kids or playing in the occasional game himself, Bell is co-owner of 7 Cold Brew, a San Diego company that delivers specialty coffee to local offices, restaurants, and bars.

24 Heath Bell, interview with Ben and Woods, May 22, 2018, mighty1090.com/episode/heath-bell-i-really-just-miss-the-guys-we-didnt-always-talk-baseball-we-would-just-talk-about-life/