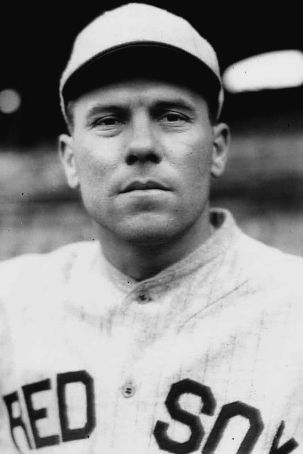 That Herb Bradley is the only major leaguer to come from Agenda, Kansas, is not surprising, given that the city about 160 miles north of Wichita had only 68 residents in the 2010 census. To be fair, there were 239 residents when the 1920 census was conducted. Herbert Theodore Bradley was born on January 3, 1903, to farming parents. Both parents – Stephen Harvey Bradley and Amanda Pauline Nelson – were immigrants. Stephen was born in Milton, Kent, United Kingdom (his father had been a baker and butcher) and arrived in America in 1897. Amanda was born in Kristianstad, Sweden, and had arrived in 1880. The two married in March 1902, and 10 months later had their first child, Herbert. Five years later a daughter, Gladys, was born.

The 1910 census shows the family living at Elk Creek, Kansas and farming. Ten years later, in the same community, Stephen was a merchant with a general store. Herb Bradley became a right-handed pitcher who grew to an even six feet tall and is listed at 170 pounds. He pitched for only one big-league team, the Boston Red Sox.

Bradley attended the Agenda public schools and graduated from Agenda High School. He then spent two years at the University of Kansas at Lawrence, where he made the varsity in basketball and baseball. Before joining the Red Sox, he pitched only one season in the minor leagues, posting a 9-11 record for the third-place Topeka Senators in the Class-D Southwestern League in 1926. Bradley married Anne Elizabeth Wurtz in the middle of the season, on July 12. His standout game came the next day against the Enid Boosters, a 19-inning pitcher’s duel against a pitcher named Roberts. The score was tied 2-2 after three innings and then went on (and on) as one scoreless frame followed another until Bradley himself singled in the 19th inning, stole second, went to third on an infield hit, and scored on another single.1

The Red Sox trained in New Orleans, under new manager Bill Carrigan, and Bradley was one of several rookies hoping to make the team. He did, and his first appearance came on May 9, in relief, working one inning and giving up two runs in a game which saw Detroit clobber five Red Sox pitchers for 17 runs. He appeared in two more games, May 29 and June 3, once getting hit even harder. With a 27.00 ERA, he was sent to get some seasoning over the summer with the Waterbury (Connecticut) Brasscos (Eastern League). He got in 171 innings of work, with a 3.47 earned run average and a 7-13 record.

The Red Sox were mired in last place, as they were almost every year of the 1920s, so had little to lose by bringing Bradley back up in September. He was much better in his two starts. On September 23, he pitched 11 innings against the visiting White Sox and lost a 2-1 heartbreaker on an unearned run – a walk followed by a bunt, a single, and a throwing error allowing the base runner to score. Bradley had singled in the Red Sox run back in the bottom of the fifth.

After an inning of relief on the 26th, he got another start, in Philadelphia on September 29, and pitched another complete game, allowing five hits in a 6-1 win to end the season with a 3.13 ERA. That turned out to be his only major-league win. “Who is that young man?” asked Athletics manager Connie Mack. “He looks pretty good, doesn’t he?”2 Bradley was 2-for-4 in the game and finished the season batting .429 (3-for-7).

Newspapers at the time, even the Boston Herald, referred to him at times as Jack Bradley, or, in the February 29, 1928 Herald, Bill Bradley. In 1928 Bradley was with the team into mid-July, appearing in 15 games (five starts) but with a record of 0-3 and a poor ERA of 7.23. He pitched a shutout, technically, in his first start, but it was a five-inning 0-0 tie game against the visiting Senators before a downpour brought the game to a halt. After July 14, he was optioned to Pittsfield for the rest of the year. He won seven games and lost four, with a 3.03 ERA. A standout game occurred on August 16, a 6-2 win over Hartford at Waconah Park; in which he drove in two of the Pittsfield wins. Bradley’s bat had not been as productive for Boston; he was 2-for-13 at the plate (.154).

On July 23 Bradley was “sent out unconditionally” to the Canton club in the Central League, where he was 9-3 with a 4.03 ERA.

He had pitched in parts of three major-league seasons with a career 5.93 ERA and a 1-4 record.

Bradley started 1930 with the Nashville Vols, but on June 24 was traded to the Mobile Bears. He had very little success for Mobile (3-11, 6.77). One can pin the ERA on him, but not so much the won/loss record. Mobile finished in last place, 51 games behind the Memphis Chicks.

In 1933 Bradley pitched in the Mississippi Valley League for the Keokuk Indians. His record was 12-13 (3.81). The next year he split his time between the Central League’s Davenport Blue Sox and Western League’s St. Joseph Saints. Records for the year are incomplete, but it does not appear he worked much. For Davenport, it was said he “simply couldn’t get started” and he was released in late May.3

His last year was 1935. He started the year pitching for a semipro club in Kansas, but at the end of May it was announced he would be back again with Fort Wayne.4 He cruised in his first game, a 21-2 win on June 4 over Peoria, but was released in July. Bradley finished the season (and his professional pitching career) with the Springfield Senators.

Beginning in 1941, Bradley owned and operated the Bradley Motor Company in Clay Center, Kansas, not all that far from Agenda. On October 11, 1959, X-rays indicated a need for surgery for Carcinoma Caecum. Five days later he “died unexpectedly in the hospital while awaiting surgery.”5 The State of Kansas death certificate, completed by the doctor at Clay County Hospital, specified that the cause of death was “massive coronary thrombosis with death in 5 or 6 minutes. Patient was hospitalized in preparation for hemi colectomy for Carcinoma Caecum. No prior evidence of Coronary heart disease.”