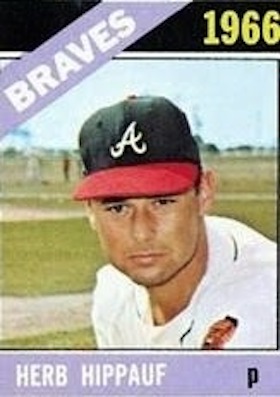 Hard-throwing left-hander Herb Hippauf’s major-league career was confined to three brief, ineffective relief appearances within a six-game span during the Braves’ 1966 inaugural season in Atlanta. Forced out of baseball the following season by chronic elbow pain, Hippauf parlayed his passion for the game, a keen eye for talent, and an exemplary work ethic into a four-decade career as a big-league scout and national cross-checker before succumbing to cancer in 1995 at the age of 56.

Herbert August Hippauf was born on May 9, 1939, in the Bronx, New York, the second of two children born to Meinard and Margaret (Rothstein) Hippauf. Meinard, born in Bad Salzbrunn, Germany (today the city is known as Szczawno Zdrój and located in southwestern Poland), emigrated as an 18-year-old to New York in 1927 and later married Margaret, a native New Yorker, in 1932. He was employed as an elevator operator and she was a homemaker who took care of Herb and his older brother, Bert. By 1950 the family had traded the cold winters of the Northeast for the year-round temperate climate of Pasadena, California, where Meinard found work as a painter. Little is known about young Herb’s life in New York; however, it is clear that he had a passion for baseball. Tall (6-feet) and lanky, Herb attended John Muir High School in Pasadena, where he helped lead coach Don Shoup’s Mustangs to the Foothills League championship in his senior year as an agile right-hand-hitting center fielder and tough left-handed hurler. At least 10 members of the team, including Hippauf, signed to play college baseball.  Hippauf and four others enrolled at Pasadena City College, where he made news as a hard-throwing strikeout artist, once whiffing 19 batters. He led the Lancers to two consecutive Western States Conference co-championships in 1958 and 1959. During his high-school and college years he also pitched against more experienced competition and many former professional players in local semipro leagues, the So Cal Winter League and the competitive Scoremaster League.

Hippauf’s potential caught the attention of Johnny Moore, a longtime Milwaukee Braves scout credited with signing such stars as Eddie Mathews and Del Crandall. After following the lefty for more than a year, he signed Hippauf to a contract in February 1960 for an undisclosed bonus. “I expect the difference with the ball I have played will be eight great hitters on every club instead of one,” said Hippauf, who had no other big-league offers.1 “He has good control and a good curve,” said veteran Lancers coach John Thurman, who declared “Hippauf ready to make the jump to professional baseball.”2

In 1960 Hippauf began his six-year odyssey filled with injury, frustrations, and moments of glory, gradually working his way through the Braves’ minor-league system. He was assigned to the Boise Braves of the Class C Pioneer League, where he posted 14 wins (fourth-highest total in the league), made 20 starts among his 36 appearances, and logged 179 innings. He capped off his fine rookie season by winning the clinching game in the league championship, tossing a five-hitter to defeat the Idaho Falls Russets.

Hippauf’s most important pitch of the 1960 season came when he asked Judith Louise Barrigan of Pasadena to marry him. They wed on September 16, 1960, in Westminster Presbyterian Church in Pasadena. Over the course of the decade they welcomed three daughters (Kathy, Karen, and Kimberly) to the world. Weeks after the wedding, Hippauf was back on the mound pitching in the Scoremaster League.

Hippauf got off to a torrid start for the Yakima (Washington) Braves in the Class B Northwest League in 1961. He began the season with three consecutive shutouts, tossed 33 consecutive innings before he surrendered his first earned run, and won his first nine decisions. Topps Chewing Gum named him the Class B Minor League Player of the Month for May.3 A midseason all-star with seemingly unlimited potential, Hippauf appeared to be the Braves’ best pitching prospect in the lower minor leagues. However, his promising season was cut short by the elbow problems that would eventually end his career five years later. The Braves shut down the lefty in July, and he returned to Southern California to rest his arm. He finished with a 10-5 record in 17 appearances (16 starts) and posted a 3.39 ERA in 109 innings.

Confident that rest was the answer to Hippauf’s elbow woes, the Braves promoted him to the Austin Senators of the Double-A Texas to start the 1962 season. Just 19 games into the season, Hippauf suffered a fractured jaw on a pitch thrown by Amarillo’s Ed Merritt on May 3. Carried from the field, he was rushed to the hospital for surgery and had his jaw wired shut. Physically weak, Hippauf lost more than 20 pounds, dropping to about 175 pounds, and missed more than three weeks of the season. When he returned to the Senators he struggled and was relegated to the bullpen. With a disappointing 5.27 ERA in 41 innings, he was demoted in late July back to Yakima, where he won three of eight decisions in 12 starts. The Braves sent him to the Florida Instructional League in October for more experience and a chance to work with big-league coaches.

Hippauf was promoted again in 1963 and started the season with the Braves’ top minor-league club, the Denver Bears of the Triple-A Pacific Coast League. After he struggled in six relief appearances, it was clear he was not ready for the Triple-A level and he was transferred back to Austin. Used primarily as a reliever, Hippauf made just seven starts among his 29 appearances and posted a respectable 3.75 ERA. Now 24 years old, Hippauf had seen his big-league potential had lose its luster as he was eclipsed by Austin’s younger big-league prospects such as Wade Blasingame, Clay Carroll, and Pat House.

Hippauf worked fast on the mound and possessed a pickoff move to first base once described as “the finest … since Warren Spahn.”4 He credited former big-league pitcher and Braves coach Gordon Maltzberger with teaching him the move in 1960. “I just try to make my move look like my regular pitching motion,” Hippauf said.5

After he logged just 90 innings in 1963, it was not a surprise that Hippauf started the 1964 season with Austin, the first time in his professional career that he was not promoted at the start of a new campaign. Surprisingly, Hippauf got off to his best start in three years and pitched two early-season shutouts as part of the staff’s exceptional streak of 59 consecutive innings without allowing an earned run. A tough-luck loser with a 6-8 record, Hippauf posted a sparkling 2.23 ERA in 20 appearances, including 14 starts, and was rewarded with a midseason promotion to Denver. Hippauf failed to duplicate his success in the PCL. With a 1-5 record and an ERA approaching 5.00, his big-league future looked doubtful.

Little was expected of Hippauf when the 26-year-old inaugurated his fifth season of professional baseball as a crafty veteran on a young Double-A staff in Austin, Texas. With his career on the line, Hippauf started the season with seven wins in his first eight decisions and earned a spot on the league’s midseason all-star team. Seemingly in the best health since he started in Organized Baseball, Hippauf led the league with 30 starts and 235 innings, and was the circuit’s hardest-to-hit pitcher, surrendering just 7.2 hits per nine innings. His 15 wins and 196 strikeouts were second-best in the league. Considered the league’s best lefty along with Larry Jaster of the Tulsa Oilers, Hippauf was also named to the regular-season all-star team. The Braves took notice of Hippauf’s accomplishments and added him to their 40-man roster in the offseason.

Hippauf reported to West Palm Beach, Florida, to participate with the Braves in his first big-league spring training. After several years of declining attendance in Milwaukee and a protracted and ugly court battle to keep the team in Milwaukee, the Braves officially became the Atlanta Braves in 1966. The Braves had a deep pitching staff led by 25-year-old Tony Cloninger and 22-year-old Wade Blasingame (who had combined for 40 wins in 1965), Denny Lemaster, and veteran Ken Johnson. Used sparingly in camp, Hippauf was sent to Richmond, the club’s affiliate in the Triple-A International League, on March 21. Two days later, manager Bobby Bragan changed his mind and recalled the lefty. Given a second opportunity to show his stuff, Hippauf made the most of his chances. The Sporting News reported that “[Hippauf] astonished Braves bosses with [his] work,” making Bragan’s decisions on a final staff even more difficult.6 Lauded for his poise under pressure, Hippauf ultimately beat out lefties Dick Kelley and Arnold Earley for a spot in the bullpen.7

Donning number 24, Hippauf made his major-league debut on April 27 against Los Angeles at Dodger Stadium. He relieved starter Hank Fischer in the third inning with one out and runners on first and second. He retired Ron Fairly on a line drive to the outfield and Jim Lefebvre on an infield popup to get out of the jam and keep the game scoreless. But Hippauf lasted just one more inning and picked up the loss when the Dodgers scorched him for four hits and three runs in an eventual 4-1 win. Hippauf made just two more brief appearances, yielding two hits and a walk, and committing a throwing error to the six batters he faced. On May 4 the Braves optioned him to Richmond. Back in the minors, Hippauf struggled with his demotion and even more with a recurrence of tendinitis in his elbow which made pitching painful.8 The Braves recalled him at the end of the season, but he did not appear in a game.9

Hippauf was invited to spring training in 1967 but decided to retire instead. His big-league career was limited to just three appearances, 2? innings, and a 13.50 ERA. In his seven-year minor-league career he won 63 games, lost 55, and logged 980 innings.

Hippauf was not out of baseball long. In 1968 he began a career spanning four decades as a respected major-league scout. After working with the Houston Astros, Atlanta Braves, and Montreal Expos, Hippauf was named national cross-checker and scout for the National League expansion Colorado Rockies in November 1991. “Herb was an outgoing, gregarious, and easy-to-get-to-know man who loved a practical joke and could take one, too,” said Pat Daugherty, the Rockies’ national scouting director who hired Hippauf, in an interview with the author. “We worked together in Montreal and I knew him as a good judge of talent. He helped with our major-league draft and was indispensible for our organization. He’d do anything to help our club.”10 Rockies scout Dar Cox, who joined the team in 1991, echoed those sentiments. “Herb was like a father figure to all of us,” he told the author. “Most all of us were young and inexperienced when we started [in 1991] and Herb taught us all. He was a patient mentor and dedicated team player. We picked his brains and learned to how to evaluate talent and trust our judgment. He was a great listener and made us feel as though our views were important.”11

Hippauf’s career was cut short by liver cancer, which took his life on July 17, 1995. Only 56 years old, he was laid to rest at the Santa Clara Mission Cemetery, and was survived by his wife and three daughters. Under Daugherty’s leadership the Colorado Rockies established, in 1996, the annual Herb Hippauf Scouting Award to honor Hippauf’s legacy. It is given annually to an individual who “exemplifies loyalty, dedication, honesty, and is committed to doing what is in the best interest of the Colorado Rockies Baseball Club.”12 “Hippauf embodied the ideals of the organization,” said Daugherty. The Northern California Scouting Association also holds the annual Herb Hippauf Memorial Golf Tournament in his honor.