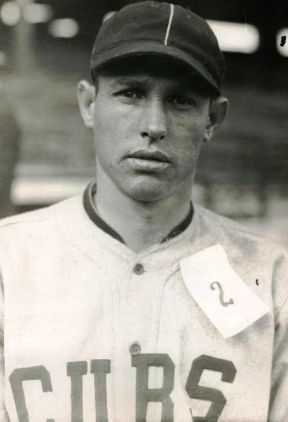 Major-league ball was an every-other-year thing for Howard Fitzgerald. The outfielder and pinch hitter played in the big leagues in 1922, 1924, and 1926, and then never again.

He was a native of Eagle Lake, Texas – born there on May 16, 1902, at Shaw’s Bend. Eagle Lake is about 70 miles almost due west of Houston and 140 miles east of San Antonio. Fitzgerald later attended the University of Texas at Austin. And his first foray into professional baseball was almost right out of college, debuting for the Chicago Cubs at Brooklyn’s Ebbets Field on September 17, 1922. He pinch-hit, and drew a base on balls.

Fitzgerald’s parents were Howard and Ruby (Chumney) Fitzgerald. His mother’s maiden name became his middle name. The elder Howard was a doctor, a general practitioner. Both parents were Texas natives themselves. Howie attended Eagle Lake public schools, right through graduation.

At UT, Fitzgerald played first base for noted Longhorns coach Billy Disch. He had made a name for himself in his first year, 1919-20, dubbed “the sensational freshman” by the Dallas Morning News.1

At one point in 1920, Fitzgerald applied for a US passport to go to Mexico via Laredo. His application read “object of visit: playing baseball.”

After graduation in 1922, Fitzgerald played with Amarillo of the West Texas League. On August 9, it was reported that his contract had been sold to the Cubs, with him to report at the end of the West Texas League season. It was noted that he had previously been property of the Philadelphia Athletics.2 He’d been given a brief look in the summer of 1920 but had not made the grade, and had not appeared in any games.3

The day after his debut, Fitzgerald was giving the starting assignment in right field and collected his first major-league hit, a double in his very first at-bat, part of a 1-for-4 day. He was also said to have “fielded cleverly and shown a lot of speed.”4

On the road against the Phillies, Fitzgerald played both halves of the September 20 doubleheader and drove in his first and second runs in the first game, with two singles and a walk in five plate appearances. Cubs manager Bill Killefer had to be pleased. Fitzgerald got into 10 games in what remained of the season, pinch-hitting four times (with two base hits) and working right field in six games. All told, he was .333 in the very limited experience, with four RBIs, the double his only extra-base hit.

Fitzgerald played for the Three-I League’s Danville (Illinois) Veterans in 1923. That December the Cubs traded him to Wichita Falls as part of a four-player transaction, two players going in each direction.5

He had a very successful 1924 season in the Texas League, batting .327 with nine home runs in 146 games. In late September he was called up to the Cubs and appeared in seven games, but with only three hits in 19 at-bats (.158). He drove in two runs.

Fitzgerald batted and threw left-handed. He is listed as 5-feet-11 and weighing 163 pounds. He also played for Wichita Falls, usually center field, from 1925 through 1930. Records are not available for all seasons but he generally hit around .300, with 13 to 15 home runs in each season for which we have records. He was said to be “one of the most valuable fly chasers in the league, a heavy hitter and one of the greatest fielders the league has ever known.”6

In May 1926 Fitzgerald was obtained by the Boston Red Sox in a trade for pitchers Joe Kiefer and Buster Ross and outfielder Tom Jenkins.7 He joined the Red Sox in time to get into the June 5 game and played left field in his first 20 games with Boston, batting .269 with eight RBIs over the span. Manager Lee Fohl began to use Fitzgerald as a pinch-hitter and he received eight assignments in that role, going 2-for-8.

Fitzgerald’s last game in the majors was on August 6. He singled in his final at-bat. The Red Sox released him back to Wichita Falls, at the request of the team in Texas, which “insistently asked for his services” and promised that the Red Sox could have him back after the Texas League season.8There he did play through the 1930 season, moving on to Fort Worth, splitting the 1931 season more or less equally between Fort Worth and Indianapolis.

After baseball, Fitzgerald took up dry cleaning, running his own cleaning and pressing shop in Eagle Lake. He had married Lue Minette Fell in March 1924, at Eagle Lake, and – while also farming and ranching – they raised two children named after themselves, first Lue and then Howard.

In late February 1959 Fitzgerald was involved in an automobile accident 10 miles from Eagle Lake and suffered severe head and chest injuries, resulting in intercranial hemorrhaging. He was pronounced dead in Mathews, Texas, on February 26.