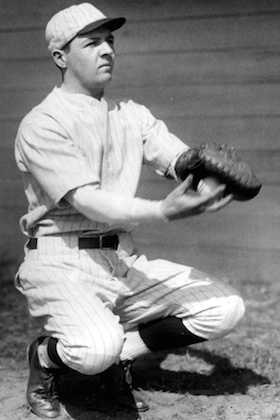 Pittsfield, Massachusetts, was the geographic center of Boston Red Sox catcher Howie Storie’s life. He was born in the Western Massachusetts city, grew up there, worked there after baseball, died there, and is buried there.

He played six games for the Red Sox in 1931 and six in 1932. That was it, Storie’s major-league career. He played a modest number of games in the minors, later on, but never all that far from home. Hazleton, Pennsylvania, was the farthest home club from Pittsfield, just under 250 miles by car.

Howard Edward Storie was born on May 15, 1911. His father, William, was a salesman for a grocery store. His mother, Margaret (Fallon), worked to raise Howie, his older brother, William, and his younger sister, Ruth. Howie’s paternal grandfather was an immigrant from Scotland. By the time of the 1930 US Census in Pittsfield, both Williams, father and brother, are listed as grocers, as was Howie’s uncle Frank Fallon, who shared the household.

Howie’s father, known as Bud, had played for Pittsfield High School 20 years earlier, a shortstop and a good batter. Howie’s first time playing baseball was in high school, his first year of baseball being 1929. He was apparently quite a hitter, banging out three home runs in one game at Bennington, Vermont, breaking some windows in the Old Soldiers Home. He also played for Nation-Wide Grocers and for the Copake Falls, New York, semipro team.1

Shano Collins was manager of the local Eastern League team, the Pittsfield Hillies. A resident of Pittsfield, Collins came to know William “Bud” Storie. When Collins was named manager of the Boston Red Sox for the 1931 season, he said he’d take Howie under his wing. Collins and Howie Storie both boarded the train for spring training in Pensacola, Florida. “Bud, I shall look after the boy carefully and give him every chance in the world to make good,” he told Howie’s father.2 Howie was just 19 years old.

Howie had attended the Pontoosuc School through grade 9 and then three years at Pittsfield High School.3 He’d played sandlot in the area for the Studebakers and for the high-school team and then, in 1930, played some semipro ball as a catcher for a team cobbled together that represented both Pittsfield and Hartford, Connecticut.4 In the summer of 1930, Storie played for a Pittsfield City League team.5

Storie traveled to Red Sox spring training “on his manager’s recommendation … one of several young players, who were not on the original list.”6 The Red Sox had finished in last place for six years in a row and eight of the last nine. Shano Collins was determined to climb out of the cellar, was trying out a lot of pitchers, and wanted to have a couple of extra catchers available for the spring workouts.

As it happened, Storie impressed. He made the team and Collins was said to believe he was going to become a “grand catcher.” It was expected Storie would be farmed out for more experience, but kept under option.7

Storie’s major-league debut came on September 7, 1931, at Braves Field in Boston, where the Red Sox played their Sunday games that year. (Under Boston’s Blue Laws, Sunday games were forbidden at Fenway Park.) The Washington Senators beat the Red Sox, 7-5, in the first game of a doubleheader and 15-1 in the second game, off to a 12-0 start after 1½ innings. Collins gave catcher Charlie Berry a break in the second game and put Storie in to pinch-hit for him and then catch the rest of the game. He “caught most of the second game,” the Herald wrote, “He looks the part of a catcher-in-the-making. He hit the ball well and lustily, although connecting only for a single,” wrote Burt Whitman.8 The Boston Globe‘s James C. O’Leary said Storie “showed up pretty well.”9

Storie got another single in his next game, the second game of a September 13 doubleheader against the visiting Chicago White Sox. It was a 2-2, 14-inning tie. In the Herald, Whitman enthused, “Storie looks like one of the best young catchers Boson fans have seen since Mickey Cochrane first appeared here with the A’s.”10

Storie appeared in four more games later in the month. He had 17 at-bats in the six games, with two singles giving him a .118 batting average. He handled 23 chances behind the plate without an error.

After the season Collins said, “Howie Storie is going to be a great catcher and he came along faster this season than I expected. It is a great jump from the high school ranks to the big show, and although I realized that Howie had great possibilities, I did not think that he would be able to step in and catch major league pitching without a term in the minors. Still he did a great job when I called on him, handling the deliveries of veteran twirlers and keeping in mind the weaknesses of batters so well that it was not necessary for a pitcher to shake him off more than once or twice in the game.”11

Storie had been farmed out during the season at one point, to a team in the New York-Penn League. There was one night game in which he suffered five passed balls. The team – which appears to have been Hazleton – turned him back to Boston, and the Red Sox carried him for a while longer but then sent him home, letting him know he could be recalled at any time. When Storie told the Red Sox that the New Haven team approached him about signing, the Red Sox brought him up to Boston again in mid-August.12

Storie began the 1933 season with the Reading Red Sox, but after 13 games (batting .167) he was given his unconditional release on May 23.13 He played the rest of the season with the Class-B New England League team in Worcester, the Chiefs. He hit .309 over the course of 73 games.

SABR’s Minor League database shows no specific statistics for the 1934 season, but Storie played for the Manchester (New Hampshire) Indians and then the Waltham/Worcester Rosebuds, both teams in the Northeastern League.

In 1935 Storie appeared in 11 games for Elmira of the New York-Penn League. That was his last year in Organized Baseball. A considerable number of the games in New England were night games. “Lighting systems weren’t much in those days,” wrote Roger O’Gara, “and Howie’s eyes went bad.”14

The 1940 US Census shows Storie working as a truck driver for a grocery concern. He had married Anna Mary Moran in October 1936 and was living with the Moran family in Pittsfield at the time of the census.

Storie bought Dick Mooney’s Café on Columbus Avenue in Pittsfield and then, with his brother-in-law Eddie Moran, purchased the Highway Diner, operating it as the Hitchin’ Post. Both were sold, perhaps after unsuccessful experiences (O’Gara said Storie “had considerable tough luck in business.”) The 1961 Pittsfield City Directory, however, showed him as president of Storie and Moran, Inc., proprietors of the Golden Tap Café on Columbus Avenue.

At the time of his 1968 column, O’Gara said that Storie had been working for the past year as a bartender at Del Gallo’s, a café on Newell Street in Pittsfield.

Storie died of a heart attack in Pittsfield on July 27, 1968, while tending bar at Del Gallo’s. His brother, William, had died less than two weeks earlier.15

1 Undated 1968 article by Roger O’Gara, quite possibly in the Berkshire Eagle, found in Storie’s Hall of Fame player file.

3 Storie himself said it was Pittsfield High when he completed his player questionnaire for the Hall of Fame. After 1930, he transferred to St. Joseph’s High, but did not play ball there.

5 Howie Storie, “How I Got My Start in Baseball,” undated clipping in Storie’s Hall of Fame player file.

12 The September 19, 1931, Springfield Republican reported that he had been “farmed out for a spell.” The October 3 issue of the paper said it was to a New York-Penn League team. That it was Hazleton was suggested by an August 14 clipping from an unidentified Pittsfield paper, the clipping found in Storie’s player file. This other paper said it was Springfield, and not New Haven, which had inquired about signing Storie.