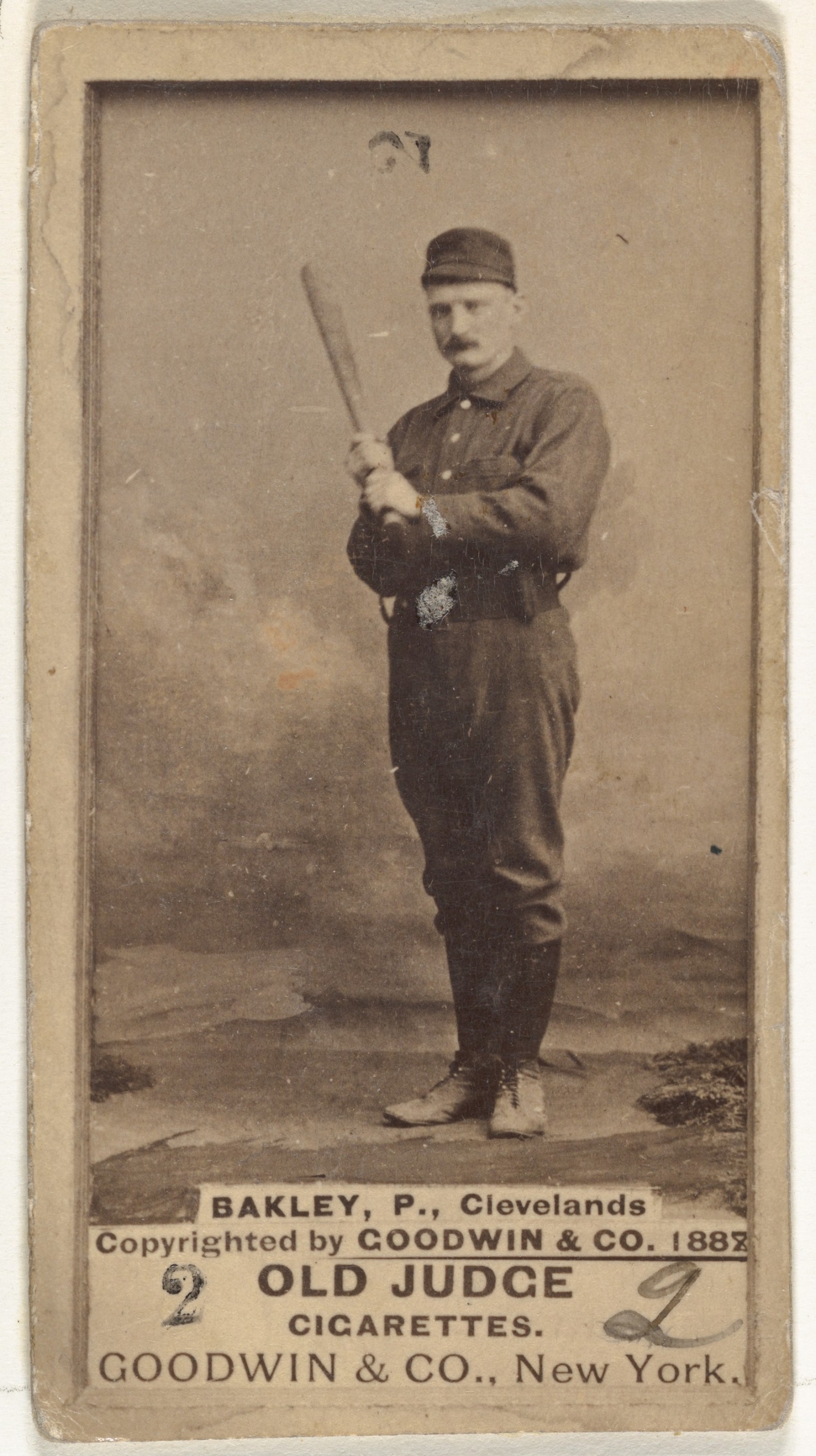 He was accused of gambling on baseball early in his playing career. He was acknowledged to have a serious alcohol problem, one that may have contributed to his death at age 50. His professional pitching record, for six major-league seasons and four at the minor-league and independent levels, was 109-161. On first blush, and in any era of the professional game’s long history, those numbers not only are unremarkable, but indicate that the pitcher was relatively ineffective. Yet modern metrics, applied to the greatest degree possible, given that the subject pitched in the late nineteenth century, value him with a Wins Above Replacement (WAR) rating of 1.1 for his major-league time.1 That WAR estimate indicates that there is value in more closely examining the player and his career. A deeper dive into Jersey Bakley’s record reveals details embedded within his professional baseball career that point to a better player than the raw numbers might suggest, and that in a sense underscore a life more complex than a simple obituary might convey.

Enoch Edward Bakley was born on April 17, 1864, in what was then called Blackwoodtown, New Jersey. Now called simply Blackwood, the community lies south-southeast of Philadelphia, across the Delaware river and about eight miles into New Jersey. (Hence his nickname, Jersey.) Enoch’s father, Henry, fought in the Civil War as a private in Company D of the New Jersey Volunteer 25th Regiment.2 Little is recorded about Enoch’s early life, but according to the 1880 US Census, he and his father were both ironworkers in a local mill.3 The work was hazardous but provided a living wage, and on July 16, 1882, Enoch married Barbara Carolyn Krantz, a daughter of German immigrants, in Gloucester City, New Jersey.4 In 1883 their first child, Edward Jr., was born, and he was joined by sister Barbara in 1888 and brother John in 1890. The marriage did not last, and at some point between 1890 and 1896 (when Barbara remarried), the couple divorced.5 Of note, Bakley’s name was often spelled Bakely in newspaper accounts of his baseball activity.

In 1883, with a family, Enoch accepted a chance to pitch for the Pottsville Anthracites of the Interstate Association, about 85 miles northwest of Philadelphia. At 5-feet-8 and 170 pounds, Bakley pitched and played the outfield, although Pottsville used him primarily in the pitching box. The team was not very good, and finished 1883 with a 15-50 record under three different managers.6 Bakley is credited with a 2-5 record during his short stint but posted an ERA of 2.95. The talent level was clear, and in May, the American Association’s Philadelphia Athletics signed him to fill the void created by an injury to Bobby Mathews, who sprained his ankle trying to steal second base.7 He made his major-league debut on May 11, 1883, in a 4-3 win over the Tim Keefe-led New York Metropolitans. Philadelphia scored four runs in the top of the first inning, giving the 19-year-old pitcher a cushion before he threw his first pitch. Bakley pitched well for four innings before giving up two runs in the bottom of the fifth and another in the sixth, but he held on for the win.8

Led by Harry Stovey, among others, the 1883 Athletics finished first in the league with a 66-32 record. The 19-year-old won five games before finishing with a 5-3 mark for the season, but spent much of the season on loan to both Pottsville and Harrisburg.9

Bakley jumped to the upstart, and short-lived, Union Association in 1884. Playing with the Philadelphia Keystones, Wilmington Quicksteps, and Kansas City Cowboys, he lost a league-leading 30 games while winning 16.10 SABR historian Justin McKinney discovered that in 1884 Bakley originally signed a contract with the Littlestown, Pennsylvania, club of the Keystone Association in addition to his deal with the Philadelphia Keystones of the Union Association. Since the teenager had already taken money from Littlestown prior to signing with Philadelphia, he tried to feign illness in an attempt to void the Littlestown obligation.11 The effort failed. Blacklisted under the National Agreement, Bakley tried to sign with Providence when the Keystones folded in August, but was denied reinstatement.12 He played out the season in two brief stops in Wilmington and Kansas City.

After the Union Association dissolved, Bakley moved on to Portland (Maine) in the independent Eastern New England League, and the Albany Senators and Oswego Sweegs of the New York State League for 1885. In 1886, and again in 1887, the pitcher signed with the Rochester Maroons of the International League. (Some sources refer to it as the International Association.)13

In Rochester Bakley began to gain the attention of the news media for reasons beyond the baseball diamond. While gambling was neither sanctioned nor excluded from baseball at the time, the perception of players possibly throwing games was intolerable. At one point, there were rumors that Bakley was involved. In July 1886, in response to one reporter, Maroons manager Frank Bancroft said, “The statement that Bakley had been released or suspended on account of selling the game was wholly without foundation. He has only been temporarily suspended. He had been intemperate and was used up physically. … The club, as a whole, are total abstainers. No man can drink whiskey and play ball. …”14

With that single declaration, Bancroft both exonerated Bakley of any gambling charges, and identified what became the root of the pitcher’s demise: alcohol. Throughout his career, certainly going forward from his time with Rochester, Bakley suffered from a drinking problem. In 1887 he and teammate Fred Lewis were arrested and fined $50 for public drunkenness, and the antics began to wear on his manager. For every game in which he homered and starred defensively, it seemed there were several games in which he appeared lost.15 Rob Neyer, in the 1992 edition of The Baseball Book, encapsulated the pitcher’s career in a precis of his tenure: “Bakely [sic] pitched six seasons in the major leagues for nine different teams. … The reasons for his transcience weren’t much of a mystery. Bakely was a drunk, and not that great a pitcher besides. …”16

Yet Bakley did have a modicum of talent. In 1888 he began the first of three consecutive seasons in Cleveland –with different teams and each in a different league. The moribund Cleveland Blues, a team that had posted a 39-92 record in the American Association in 1887 and finished 54 games out of first, signed Bakley. The now 24-year-old won 25 games (against 33 losses) with a 2.97 ERA. In 1889 Bakley played for the Cleveland Spiders of the National League and lowered his ERA to 2.96, but won only 12 games. In 1890 he jumped to the Cleveland Infants of the new Players’ League, but the demise of the latter, and his release by the Spiders, led him to Washington and then Baltimore in 1891.

Perhaps underscoring the athletic talent that Bakley squandered, The Sporting News reported that he was “once matched to fight Jack Dempsey, the Nonpareil [not the Jack Dempsey of twentieth-century renown]. Frank Bancroft called the fight off, and it is probably lucky for Bakley that he did, as he would not have escaped from a go with the redoubtable Jack without carrying some marks of the encounter.”17

Several interesting events occurred during the 1890 season. On July 9 Bakley was an emergency substitute umpire for Harry Leach, who’d been knocked unconscious by a foul tip the day before.18 Bakley had performed the task once before, in August 1888 in a game versus Kansas City,19 and the 1890 game proved to be his final appearance as an umpire. Then, on September 3, in a makeup of a May rainout against Boston, Bakley gave up Harry Stovey’s 100th career home run. That feat by Stovey made him the first member of baseball’s figurative “100 Homer” club and earned Bakley a mention in the game’s annals.20

In 1891, after losing 10 of his first 12 decisions, Bakley was released by Washington. Baltimore signed him almost immediately, and the pitcher enjoyed a renaissance of sorts with his new team, winning four of his first six starts. Unable to control his alcohol use, he was suspended without pay for disobeying club rules.21 Within a week after his final appearance in an August 20 loss to Washington, Baltimore gave Bakley his last big-league release. According to the Baltimore Sun, “Bakely is said to have broken several promises made to the management of the club, and for this reason he was allowed to go.”22

He remained in Baltimore and in 1895 joined the Allentown Goobers of the Pennsylvania State League. He pitched well initially, earning newspaper praise: “Bakely pitched the better game. He was steady, displayed considerable headwork and never allowed himself to get rattled by the loud coaching.”23 But the Goobers released him in late July, with a local correspondent for The Sporting News reporting, “Considerable regret is felt here over the release of Bakely. ‘Jersey’ was quite popular and he won more games for Allentown than any of the other pitchers. His jaunty step as he walked up to the pitcher’s box was especially pleasing to the ladies, many of them attending games when they knew Bakely was going to pitch. He had such a bewitching smile also and it is to be regretted that his fondness for ‘smiles’ led to his release.”24

In August, after a stint with Pottstown and now pitching for Reading, Pennsylvania, the tone changed, one paper reporting, “Jersey Bakely was the sweetest kind of tapioca, the locals batting him terrifically. In every inning Lancaster hit safely one or more times, their total hits being twenty-four.”25 In short, after 13 years, Bakley’s baseball career was over.

Out of baseball, uneducated, no longer married, likely an alcoholic, and still only 31, Bakley took jobs as a carpenter and rigger in the southern New Jersey/Philadelphia region over the next two decades.26 On February 17, 1915, not quite 51 years old, Jersey Bakley died at his residence in Philadelphia. The death certificate cited chronic endocarditis as the primary cause, although there is no record of an autopsy being performed. He was buried at Greenmount Cemetery in Philadelphia on February 20.

On the diamond, Bakley had some terrific seasons, despite his career losing record. He finished second in National League ERA in 1889 (2.96), seventh in American Association wins in 1888 (25), twice in the top 10 in strikeouts in his respective leagues (sixth, with 226, in the 1884 Union Association, and fourth, with 212, in the 1888 American Association), and was still in the top 200 list for career complete games (with 191), as of 2020. His career, and his life, ended in ignominy, but Jersey Bakley certainly enjoyed a few afternoons in the sun, as well.

Much of the fundamental work on this biography was crafted by David Nemec and Steve Behnke, both members of the Society for American Baseball Research. The statistical information is taken from Baseball-reference.com, unless otherwise noted. Additionally, Justin McKinney provided information regarding Bakley’s contractual issues in the Union Association in 1884.

8 The game description is from an unpublished biography of Jersey Bakley, and draws the news citation from “Another Close Contest,” Philadelphia Inquirer, May 12, 1883: 2.

12 Justin McKinney, in a pending history of the Union Association; provided to the author on October 21, 2020.

15 Bakley’s home runs were infrequent, and they merited special notice when they occurred, such as on August 26, 1887. See “Hamilton Easily Beaten,” Rochester Democrat and Chronicle, August 26, 1887: 7. The less glorious results, such as those reported in “Two Games to Toronto,” Rochester Democrat and Chronicle, September 6, 1887: 6, with fielding gaffes and hitless afternoons, became more common as the years passed.