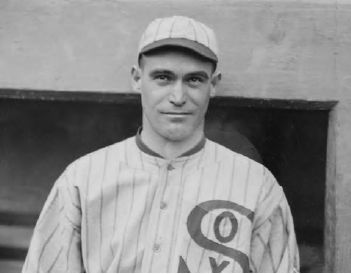 In October 1919 Joe Jenkins found himself embroiled in the Black Sox Scandal, the fixing of that year’s World Series by eight of his Chicago White Sox teammates. It was the biggest black eye in baseball’s history. Yet Jenkins, who didn’t make an appearance in the World Series, couldn’t even claim bragging rights within his own family for front-page headlines that month. Just ten days after the World Series ended, Joe learned that his brother William, a prominent businessman in Mexico and a US consular agent there, had been kidnapped by revolutionary rebels. The incident set off an international furor between the two countries that stained William Jenkins’ reputation for the rest of his life.

William was released safely after a week and Joe was soon released by the White Sox, too. His major-league career consisted of just 40 games between 1914 and 1919; he saw more combat time and gained more acclaim for his service in the World War than he did in the American League. After leaving the White Sox, Joe spent another decade catching in the minor leagues before retiring to California and running the ranch that William had bought for their elderly father.

Joseph Daniel Jenkins was born on October 12, 1890, in Shelbyville, Tennessee, the fifth of the seven children of John and Elizabeth (Biddle) Jenkins who survived to adulthood.1 John was a vineyard farmer by trade. When Joe was 10, his brother William, 23, penniless, left for Mexico with his wife and never returned. Over the next decade, William found success as an entrepreneur in the textile industry, specifically cotton hosiery, and he became a significant figure in the Puebla region.2

By then Joe was excelling in football and baseball at Battle Ground Academy in Franklin, Tennessee.3 He signed his first professional contract with Rome (Georgia) of the Southeastern League in 1911. After first trying out as an outfielder, Jenkins settled in as a catcher with Rome, developing a reputation as a better hitter than fielder.4 In 1913 he was sold to Keokuk (Iowa) of the Central Association, where he hit .283 and stole 14 bases in 121 games.5

After the 1913 season Jenkins was drafted by the St. Louis Browns and made his big-league debut on April 30, 1914, going 0-for-4 in a 12-inning tie against the Cleveland Indians. He made an error and allowed a passed ball.6 Manager Branch Rickey wasn’t satisfied with Jenkins’ defense or with any of the other catchers on his roster,7 plugging in seven different players at the position in 1914. Jenkins got into only 19 games and hit .125 in 32 at-bats, and Rickey sent the 24-year-old back down to the minor leagues for more seasoning.

Jenkins spent 1915 with the Atlanta Crackers of the Southern Association, and then hit a robust .319 with 24 doubles and 10 triples for the Houston Buffaloes of the Texas League in 1916. His contract was purchased by the Chicago White Sox, who went on to win the American League pennant in 1917. Jenkins served mostly as the team’s bullpen catcher and, with his booming voice and Tennessee drawl, provided his teammates with comic relief as a storyteller in the clubhouse. That suited him just fine, as his daughter Betty Joe Asbury later related: “He was not a hard worker, as everyone knew, but he was likable and friendly.”8

Jenkins played only one game in the field for the White Sox in 1917 and came to bat just ten times (with one hit). In Game Five of the World Series, he “had one of the busiest days of his career,” according to the Chicago Tribune. “He warmed up four different fellows for service and had a fifth on the fire when the game was over.”9 But he was voted a full World Series share by the champion Sox.

With war raging in Europe, Jenkins’ offseason got busy in a hurry. He was among the first thousand drafted by the US Army in July 1917 and he reported to Camp Gordon, near Atlanta, in November with about 70 other recruits from Tennessee. He was soon promoted to corporal and was fast-tracked to officer training.10 His baseball skills came in handy as he formed a star battery on the Camp Gordon team with Brooklyn Robins left-hander Sherry Smith. In the spring of 1918, Jenkins shipped overseas to France with the 132nd Infantry Regiment — coincidentally made up of many White Sox fans from the South Side of Chicago, as he explained in a letter to Sox owner Charles Comiskey that was published in the Chicago Tribune:

“We have been scrapping for the past ten days on the Meuse, north of Verdun, and believe me the fighting has been hot and sharp. It is becoming more apparent that Germany is through. … I am with the One Hundred and Thirty-second regiment, which is commanded by Col. Davis of Chicago, and most of the men in my platoon are from the south side, and their favorite spot is the left field of the bleachers. Believe me, those south siders can go some. … Give my regards to all the boys and tell them that in this league over here the pitchers all have plenty on everything that they throw.”11

In addition to the Meuse-Argonne offensive, Jenkins’ unit also saw combat at Flanders and St. Mihiel; he won a commission for bravery and arrived back home as a first lieutenant. He was back with the White Sox for Opening Day in that fateful season of 1919.

A grizzled veteran now at 29, Jenkins cheerfully took up his old role as bullpen catcher behind future Hall of Famer Ray Schalk and reserve Byrd Lynn. “How can you beat out a guy like Schalk?” Jenkins recalled years later. “He was the greatest.”12 Jenkins again didn’t play much, and wasn’t very good when he did. He worked in only four games behind the plate all season, made three errors in the four games, and hit just .158 in 19 at-bats. But he was present for the World Series, and watched the infamous fix unfold from his seat in the bullpen. Jenkins said it was obvious “something was up.”13

“We players who weren’t involved in the payoff thought things were funny in that first game in Cincinnati,” he recalled to the Fresno Bee in 1962. “We should have beaten Cincinnati blindfolded. We had everything, the hitters, the pitchers, the power and the speed. … Yes, it was a terrible mess.”14

In Game One, White Sox ace Eddie Cicotte was shelled 9-1 by the underdog Reds. The next day Lefty Williams, who had exhibited stellar control all season, walked six batters in a 4-2 loss. Both pitchers later testified before a Chicago grand jury that they had accepted bribes from gamblers to throw the Series. In the experimental best-of-nine-games format that was in place from 1919 to 1921, the Sox lost five games to three.

Six other players were implicated in the Black Sox Scandal — outfielders Shoeless Joe Jackson and Happy Felsch, and infielders Chick Gandil, Swede Risberg, Buck Weaver, and Fred McMullin — and all were banned from the game for life by baseball commissioner Kenesaw Mountain Landis. Jenkins and the other “clean Sox” later received a check for $1,500 from team owner Charles Comiskey — about the difference between a winning share and a losing share. He didn’t play a single inning in the Series.

But Jenkins’ mind soon turned to family matters. On October 19, ten days after the decisive Game Eight in Chicago, Joe’s brother William was kidnapped by Zapatista rebels at his mill in Puebla, Mexico. He spent a week in captivity before a $300,000 ransom was paid to the rebels and he was released. Rumors immediately circulated that the yanqui William Jenkins had been given as much as half of the ransom money by his captors, and in November the embarrassed administration of President Venustiano Carranza had Jenkins arrested and charged with staging his own kidnapping. The accusation, which Jenkins biographer Andrew Paxman argues was born largely from politicized fear-mongering and xenophobic stereotypes, “took U.S.-Mexican tensions to a new high.”15

Senator Albert Fall of New Mexico called for a Senate resolution breaking off relations between the two countries, and tensions remained high for some months after Jenkins was released and reluctantly cleared. But as Jenkins bought up the best sugar-producing land in the Matamoros Valley and later as he held a virtual monopoly on the country’s movie theaters — by 1960, Time magazine would call him “the richest man in Mexico”16 — the suspicions about how he made his fortune dogged him for the rest of his life. The name William Jenkins continues to be relevant in 21st-century Mexico through the foundation he set up and named for his late wife, Mary Street Jenkins, which funds hospitals, universities, and other philanthropic causes in the Puebla region.17

Back in the United States, Joe Jenkins found himself playing in the Pacific Coast League for the 1920 season. The veteran catcher spent 4½ seasons with the Salt Lake Bees and hit a stellar .337 and .350 for them in 1921 and 1923, respectively. Moving to the Coast League was a fortuitous move for Jenkins personally, as he met his wife, Fay Miner, in Los Angeles and married her in 1921. Fay was the daughter of an Iowa coal miner and had recently moved to California with her sister Inez, a bookkeeper.18 Joe and Fay had three children, Betty Joe, Peggy Jean, and Joseph Jr., who went by Dan.

As Joe continued to make a living in the minor leagues — after leaving Salt Lake in 1924, he played for teams in Atlanta, Seattle, Newark, Buffalo, and Elmira — the family moved around Southern California in the 1920s. Jenkins returned home every year to play winter ball in Los Angeles and support his beloved Association of Professional Ballplayers in America, which often held charity games to benefit former players in financial distress.19

The 1930 season was Jenkins’ final one in professional baseball, and at age 39 he ended on a high note, batting .320 for Elmira (New York) in the New York-Pennsylvania League before hanging ’em up. After retirement, in the midst of the Great Depression, he was one of millions of Americans who had trouble finding work, and the family neared bankruptcy without his steady job in baseball. So when his brother William asked him to move to Northern California and help their ailing father and their sister, Mamie, on their struggling fruit ranch, Joe agreed to relocate his family to Hanford.20

Joe and Fay stayed in Hanford for 40 years; he spent the time working odd jobs around the ranch (“He didn’t do very much. It was really Mamie who ran it,” Betty Joe said21), coaching softball, spoiling his six grandchildren, and turning into a prodigious golfer. He claimed one year to have spent 313 days on the course at Kings Country Club, playing “at least” 18 holes a day.22 His connections to baseball were few, though he followed the game for the rest of his life. He continued to support the APBPA and in 1940 was one of the few former players to attend the funeral of Cincinnati Reds catcher Willard Hershberger, baseball’s only in-season suicide death, held in nearby Fresno.23 After the Giants moved to San Francisco in 1958, Jenkins saw a couple of games at Candlestick Park — the first major-league games he had attended since 1920, he later told the Fresno Bee.24

8 Andrew Paxman telephone interview with Betty Asbury, May 25, 2005, shared with the author.