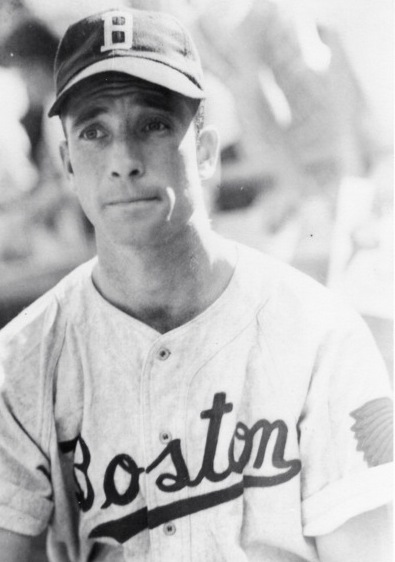 The 1945 Boston Braves team photo that appeared in The Sporting News’ 1946 Baseball Guide and Record Book contained the image of a heretofore “phantom” player seated in the back row. Posing between outfielder Bill “Square Jaw” Ramsey and pitcher Bob “Lefty” Logan, obscure Braves in their own right, was an individual noted only as “Tracey, IF.” A quick check of the Braves roster throughout the 1945 season fails to reveal such a name nor does a search of major- and minor-league databases produce a match. Who was “Tracey”?

An investigation was launched by the Boston Braves Historical Association (BBHA) upon receipt at its website of an email from the son of “Tracey” sadly informing them that his dad had passed away on February 28, 2012, at 94 years of age. The gentleman’s father had often told the tale of playing for the Braves in 1945 and had possessed a treasured team-autographed baseball from that season given to him by his teammates. The family now desired to learn more about their patriarch’s baseball exploits with Boston’s National League ballclub. This initial contact revealed a new clue. The 1945 team photograph’s player listing contained an incorrect spelling of the mystery player’s surname. The ballplayer in the back row was Joe Tracy. Still, even with this new information in hand, another search of various sources proved fruitless.

Manpower shortages during World War II forced major-league teams to constantly attempt to fill their rosters with an amalgam of pre-draft-age prospects, players classified 4-F, or physically unfit for service, by their draft boards, and beyond-their-prime aged ballplayers. Perhaps Joe Tracy was carried by the club as such a fill-in. During the war years, the Braves lineup often featured individuals falling into these categories. A number of “cup of coffee” players donned Braves togs during those affected seasons.

An analysis of the 1945 club photo yielded further information. The Baseball Guide was produced in St. Louis and the publication often used Sportsman’s Park, home to the Cardinals and Browns, as the backdrop for group pictures since both National and American League teams would pass through town during the season. As the photos were taken for inclusion in the following year’s guidebook, one would suspect that the company’s photographer, George Dorrill, would shoot such images later in the campaign so as to assure their relevance in the subsequent springtime publication. The ’45 Braves photograph reflected this pattern. In the photo, the Braves wore their “Boston” road uniforms. At Braves Field, the players would take the field dressed in pinstripes with block-lettered “Braves” on their jerseys. The comings and goings of ballplayers during the season provided more confirmation. For example, pitcher Elmer Singleton appeared in the portrait and had joined the Tribe from the Yankees in August. Missing were pitchers Jim Tobin and Nate Andrews, who had departed Boston that same month. Skipper Del Bissonette, who succeeded Bob Coleman 94 games into the season, claimed the center spot in the first row. In order for the assemblage to have been captured in this photograph, the portrait would have had to have been taken during the Braves’ visit to the Show Me State for a series against the Cardinals on September 5-7.

Another bit of photographic evidence also emerged. Joe Tracy had had his picture taken at Wrigley Field by noted photographer George Brace sometime during the 1945 season. A head-and-shoulders portrait with Tracy in a Braves road uniform can be found within the massive Brace collection. Brace would snap shots of players passing through the Windy City for future sale to them or to the public. Brace did not discriminate between star and scrub. If you appeared in uniform, he’d strive to capture your image. The result is that the Brace collection houses one of the best sources for obscure player pictures. According to the Braves’ 1945 schedule, they visited the Windy City for the first time on June 2 and ventured back to Illinois in July and September.

The above information was provided to the Tracy family by the BBHA along with a series of additional questions. A daughter of Joe Tracy’s responded to the query with some fascinating details about her father’s life that shed further light on her dad’s time in Boston.

Joe Tracy was born in Carnegie, Pennsylvania, on February 7, 1918, the fourth of seven children. Tracy’s parents had immigrated to the United States from Poland. His father found work as a miner in the state’s anthracite-rich region while his mother took in laundry to support the family. As a youngster Tracy was exposed to the harsh nature of laboring underground. Accompanying his father to work, the youngster would be tasked with chipping coal from an area with such low clearance that he had to kneel in standing water. It was such an unpleasant experience that Joe Tracy was determined not to return when he grew older.

Tracy attended Carnegie High School and was a catcher on the school’s squad. During the Depression years, baseball offered a possible escape from the coalfields for the sons of immigrants. This area of Pennsylvania would produce a number of players, managers, coaches, and umpires for the national pastime. However, any such dream that Tracy possessed was interrupted by the untimely death of his father. Forced to drop out of school to support the family, he initially found work with the railroad. His love of the game, however, continued and Tracy performed as a semipro backstop for sandlot, church, community, and company teams throughout his youth. Oftentimes, family members would travel to various dusty diamonds to cheer him on.

An able catcher, Tracy also was regarded as a fine mentor of pitchers. As a result, he received a job offer from the Weirton Steel Company that came with the expectation that he would deploy his baseball skills on the company’s team. Seeking extra work wherever he could find it, Tracy also took on odd jobs. His eventual route to Braves Field apparently was linked to such employment. Tracy was hired to cut the grass of the then retired local baseball legend Honus Wagner, also the son of a coal miner. In addition, he would chauffeur the Hall of Famer to local baseball games where Wagner made appearances and would rub shoulders with individuals associated with Organized Baseball.

A life-threatening illness also played a role in Tracy’s trek to Braves Field. A severe peptic ulcer led to a stomach perforation and peritonitis, requiring hospitalization and a very restricted diet. His medical condition caused Tracy to be classified 4-F during World War II.

Joe Tracy was married on June 6, 1945. He and his new bride had to cut short their honeymoon in Virginia so that he could join the Braves. An individual who scouted for the Boston Red Sox recommended him to a colleague at the Braves upon learning of the latter club’s need for catching help. Tracy’s duties with the Braves primarily revolved around warming up pitchers in the bullpen. Members of the Tracy family believe that he did play in some of the in-season exhibition games that the Tribe engaged in against military service teams, thereby sparing wear and tear on the catchers on the active roster.

Given his hardscrabble life, Tracy later recalled to family members the “fabulous” money that he made and the “great” accommodations provided by the club on road trips. The salary paid to him by the Tribe assisted Tracy in the beginnings of his married life. His big league “career” consisted of only one season. Approaching 30 and with a child on the way, coupled with the influx of big leaguers returning from the war, Tracy left the national pastime to raise a family.

Joe Tracy’s sports legacy extended beyond baseball. Leon Hart, who hailed from Turtle Creek, Pennsylvania (near Pittsburgh), was an acquaintance. With Notre Dame in 1949, Hart won the Heisman Trophy and Maxwell Award and went on to play six NFL seasons with the Detroit Lions. Until Cam Newton in 2011, Hart was the only player to win the Heisman, play on a national championship team, and be chosen the first overall NFL draft pick over the course of one college season. Hart invited Tracy to the Fighting Irish’s campus where he visited the locker room and was embraced by legendary coach Frank Leahy. Years later, a grandson attending Notre Dame re-enacted this special moment, sending home to his grandfather a snapshot of himself sitting on the Leahy bench outside the football stadium with the statue’s arm around his shoulder.

The Tracy family would grow over the course of over 50 years of marriage to two sons, three daughters, 12 grandchildren, and 11 great-grandchildren. His wife died in 2003. During his working life, Joe Tracy would perform many blue-collar jobs and was a member of the International Brotherhood of Electrical Workers for more than 60 years. His last job involved maintaining Pittsburgh’s city streetlights. He jokingly referred to himself as the “Old Lamplighter.” According to his daughter, he remained very proud of his time with the Braves and would share tales of his big-league experiences whenever he had an audience, even to his doctors and nurses during his final days while in intensive care.

The author wishes to thank Cathy Tracy Huth for the generous sharing of her family’s history. In addition to the sources referenced in the biography, the author accessed the Boston Braves Historical Association archives, Baseball-Reference.com, Retrosheet.org and Walter LeConte’s In Season Exhibition Games files.