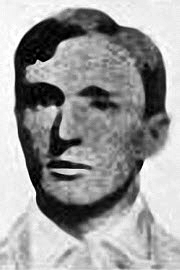 East Liverpool, Ohio, which bills itself as “The Pottery Capital of the World,” is situated about 40 miles northwest of Pittsburgh. It’s where Pretty Boy Floyd was embalmed and is the boyhood hometown of Notre Dame football coach Lou Holtz – and the place of both birth and death of major-league baseball player John Henry “Bunny” Godwin.

Between 1870 and 1880, the city’s population more than doubled, from 2,105 to 5,568. One of those new residents was Godwin, born on March 10, 1877. Unsurprisingly, his father, John, is listed in the 1880 census with the notation “works in pottery.” His mother, Elizabeth (Dechant) Godwin, was listed as “keeping store.” The couple had two daughters, Mary and Sarah, and then John. Elizabeth came from Alsace-Lorraine and her husband, John, came from England.

Bunny (the nickname was reported by his daughter Martha on the player questionnaire she completed for the National Baseball Hall of Fame) attended eight years of parochial school in East Liverpool. He was also said to have been called “Honest John.” He played local amateur ball and made his first appearance in Organized Baseball in 1903, at the age of 26, playing in 113 games for the Bloomington (Illinois) Bloomers. He hit for a .248 average, and manager William Connors led the team to the Three-I League pennant.

Godwin improved to .275 in 1904, but the team dropped in league standings. In 1905 Godwin played for two teams – Bloomington for 59 games (.260), and 15 games for the American League team in Boston. On August 1 Boston had paid a reported $750 to Bloomington for Godwin’s contract.i

His major-league debut came in the first game of a double-header on August 14, when the Americans hosted the Chicago White Sox. Boston lost, 6-1; Godwin pinch-hit unsuccessfully for Lou Criger in the bottom of the ninth. After a couple of weeks, veteran Boston sportswriter and former ballplayer Tim Murnane observed, “Godwin looks like the money, while Rising is also a likely looking chap.”ii

When the team traveled west for a road trip, Godwin was asked to stay behind and work on his game. One thing he did was play in a game for a team in the town of Beverly, along with fellow Boston players Pop Rising and Yip Owens. He had come well-recommended; according to Sporting Life: “Frank Donnelly, the best judge of players in the Three-I League, says that Boston’s new man, Godwin is a grand all-round player and fast enough for any team in the business.”iii

The September 22 Boston Globe noted that both Godwin and Pop Rising, who had both joined the team about the same time, were “weak with the stick, and have yet to hit the ball safely, showing how much easier it is to talk about picking up batsmen than to find the men.”

One of Godwin’s most significant games was played on September 25 against the Chicago White Sox. He played center field because Chick Stahl had hurt a finger. Godwin singled in the first two runs of the game and earned a subhead in the Boston Globe: “Godwin Puts Up Game That Shows the Player.” It wasn’t so much his hit that caught the paper’s attention, but his “good pair of legs and a throwing arm, for his throwing was just as remarkable as his speed.” His fielding of Sam Crawford’s long drive to center field was declared “the finest piece of ground covering ever witnessed at the ground.”

In the 15 games he played for Boston, Godwin drove in ten runs and hit for a .326 batting average. Looking back on the season, Sporting Life wrote, “Manager Collins gave Rising and Godwin a try, but they failed to electrify. They are a couple of fast kids and on the go all the time, but they failed with the stick. …When the White Sox came here Rising and Godwin were relegated to the bench and the veterans brought back.”iv

Godwin played basketball for an East Liverpool team during the winter and then joined the Boston team for spring training at Macon, Georgia. He made the team, pinch-hitting for pitcher George Winter in the top of the ninth inning of the Opening Day game at New York. He singled, a “long drive” that drove in one run, would have tied the game save for Patsy Dougherty’s throw to the plate that nabbed Moose Grimshaw.

The 1906 season was a disastrous one for Boston. The team, which had won the pennant in 1903 and 1904 finished dead last, 45½ games out of first place, with a record of 49-105. Godwin was among those who had a disappointing season, batting .187 with 15 runs batted in during the 66 games in which he appeared. More than once he was injured on the field of play, but he did appear in those 66 games. His fielding was substandard as well; he made 30 errors in his 81 career games for a fielding percentage of .885. He played all four infield positions – 27 games at third base being his most frequently-fielded position, filling in for Jimmy Collins – and 17 games in the outfield.

In December the team placed Godwin on waivers, and in January 1907 they worked a deal that sent him and some money to Minneapolis for outfielder Denny Sullivan.v The deal was apparently completed on January 30.vi Godwin spent the winter in Wellsville, Pennsylvania, where he owned a large fruit farm.vii A report in the April 7 Boston Globe said that Godwin had been sent from Minneapolis to Milwaukee. Somehow he ended up with Des Moines, according to the June 15 Sporting Life, which said they had sent him to Milwaukee. And then just two weeks later, reported, “The Steubenville Club has purchased outfielder John Godwin from the Milwaukee Club.”

After a very confusing 1907 season, it may have been a relief that Godwin played almost the full 1908 season for one team – his second stint with Bloomington. He hit for a .257 average.

Godwin was back with Bloomington for a third time in 1910, batting .251 in 110 games. But in 1911 the Bloomington franchise was sold to, and replaced by, a new team in Quincy, Illinois. The price was $3,500 for the franchise, including three contracts – pitcher Royer, pitcher Prendergast, and outfielder Godwin.viii The June 3 issue of Sporting Life reported Quincy’s sale of Godwin’s contract to the rival Davenport club.

The 1910 census reported Godwin living in Hancock, West Virginia, with the profession of “ballplayer,” living with his wife, Eunice (nee Gibbons, a New York native), and their 4-year-old son, John.

By 1920, out of baseball for eight years, Godwin was working as a potter in Madison, Ohio. There was a second child in the family, Martha, age 5.

The Godwin pottery lineage added a third generation when son John became a warehouseman in a pottery warehouse. He was a jiggerman – a worker who forms pottery on a rotating device. Both father and son held the same positions in Madison at the time of the 1940 census. John Senior worked for the Cronin China Co. at New Cumberland, Ohio, and lived in Wellsville near Rock Camp in Madison Township, near Scranton.ix

John Godwin had been in poor health for several years before he died of a coronary thrombosis at ten minutes before midnight on May 5, 1956, at East Liverpool City Hospital. He was 79 years old. He left his children, John and Martha; his sister, Agnes Phillips; seven grandchildren; and three great-grandchildren.

In addition to the sources noted in this biography, the author also accessed Godwin’s player file from the National Baseball Hall of Fame, the Encyclopedia of Minor League Baseball, Retrosheet.org, and Baseball-Reference.com.