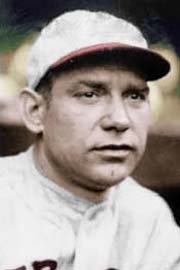 Growing up in Covington, Kentucky, just across the Ohio River from Cincinnati, Johnnie Heving enjoyed a long career spanning more than 30 years in professional baseball as a catcher and as a manager. His younger brother, Joe, worked as a pitcher, appearing in 430 major-league games to Johnnie’s 399, but spent fewer years in the minors. In his 399 big-league games, Johnnie hit for a .265 batting average (quite respectable for a catcher in those days) and had a very good .981 fielding percentage.

He was born as John Aloysius Heving in Mentor, Kentucky, about 40 miles down the Ohio River from Covington. The son of Frank and Louise Heving, he was the third-born of four boys. Frank Heving’s two parents had come to the United States from Germany, and he married Louise Busse, whose father was also German.

Frank’s life’s work was with bricks. At the time of the 1910 census, for instance, he was a burner in a brick plant. As far back as 1882, in the Covington city directory, he was working as a brick molder.

John was born on April 29, 1896. His older brothers were Bernard (a house carpenter) and Louis (a machinist in a factory). John himself worked as a machinist for the Maxwell Motor Company at the time of his registration for the World War I draft. Younger brother Joe (born September 2, 1900) was working as a hat tacker in a Cincinnati factory at the time of his own 1917 draft registration.

Johnnie attended Holy Cross for eight years of elementary and middle school, but did not go to high school. He served in the Army Air Service during the war, from 1917 to 1919, 19 months in all, and played semipro ball for the Maxwell Motor team. He played his first two professional seasons in the minors in Michigan.

Heving married Ruth Ann Mathews in October 1920 at Battle Creek, Michigan. John had just finished his second year catching for the Battle Creek Custers in the Class B Michigan-Ontario League. He played over 100 games in both 1919 and 1920 and hit .294 and .298 respectively. Battle Creek finished third (in the eight-team league) in 1919 but struggled to a seventh-place finish in 1920. Heving was a standout from the start, dubbed a “star catcher … slated to go to the majors” by Michigan’s Bay City Times 1

Heving was already showing some managerial skills, too. When the team floundered in 1920, he was one of three managers (the second one) for the team. He may actually have been more of a field captain than manager, but helped run the team after the first skipper departed.

The July 1, 1920, Saginaw News reported Heving’s sale to St. Louis.2 After the minor-league season ended, he was brought up to the majors for a look and appeared in one game for the Browns, on September 24 in Detroit. It was a 16-8 rout for the Tigers, but Heving got his feet wet with one plate appearance. He was 0-for-1, and that remained his major-league record until 1924.

He’d been a club-a-year catcher in the meantime. He was with the Browns as a backup catcher until mid-June 1921 but saw no duty whatsoever. To give him more seasoning, he was assigned to Tulsa in 1921, and then to New Orleans in 1922, and Mobile in 1923. Unfortunately for Heving, he was with the wrong team for two years running; Mobile won the Southern Association pennant in 1922 and New Orleans won it in 1923.

John Heving is variously listed as between 5-feet-10 and 6-feet tall; he himself split the difference and reported 5-feet-11 in a questionnaire he completed for the Hall of Fame. He weighed 165-170 pounds.

In 1923 the Browns turned Heving’s contract over to Mobile, which in turn sold his contract to the Boston Red Sox on September 15. He was one of 19 minor leaguers that Boston’s Bob Quinn bought that month.3 The Boston Globe wrote of Heving’s.978 fielding percentage, “His work has been the sensation of the league.”4 He came to Boston with Mobile batterymate Oscar Fuhr and the two roomed together.

Heving stayed with the Red Sox in 1924, but rode the bench until May 31, when Boston was losing at home, 9-0. Manager Lee Fohl put Heving in the game and he got a couple of plate appearances, walking once and making an out the other time. The Red Sox lost to the Senators, 12-0.

Heving’s next five appearances were all in pinch-hitting roles in June, before he finally got his first base hit, in the second game of a June 23 doubleheader against visiting Philadelphia. The Red Sox lost both games, though that was par for the course throughout the 1920s. In that second game, Heving pinch-hit for Red Ruffing and singled to center field, driving in two runs. He had one other multiple-RBI game, on September 21. He’d driven in one run in the first game that day, and then was 3-for-5 with two RBIs in the second game. He finished the season batting .284, with a .345 on-base percentage. He appeared in 45 games, with 122 plate appearances, 11 RBIs, and 15 runs scored.

Fohl was pleased with Heving’s work, his judgment in handling pitchers particularly, and in December proclaimed Johnny his first-string catcher for 1925. Fohl let Steve O’Neill go. O’Neill had caught in 92 games in 1924, with Val Picinich the number-two. As it worked out, Picinich got more work in 1925. Heving played in the same number of games – 45 – but with a woeful .168 average, and he played not at all in April or September.

Heving had almost the same workload each of the next two seasons:

Charlie Berry took on increasing responsibilities and in 1931 played in 111 games. The Red Sox – still in last place, with a 52-102 record in 1930 – decided to move on from Heving and he was placed on waivers in January 1931. That same month, Johnnie’s wife, Ruth, and two other women were burned in an explosion that demolished the house next door in Latonia, Kentucky, and threw Ruth into the cellar. She climbed from the wreckage, and then the Heving house collapsed. The Hevings’ neighbor, Virginia Reynolds, died of her injuries.5

Fortunately, Heving still had a job; the Philadelphia Athletics selected him off waivers on January 31 and he appeared in 42 games for Connie Mack’s A’s, backup to future Hall of Famer Mickey Cochrane. Heving hit .239; Cochrane batted .349 and drove in 89 runs to Heving’s 12. Heving hit the only home run of his career in 1931, on June 13 at Shibe Park off Lefty Stewart of the visiting St. Louis Browns.

Heving played the same role in 1932, understudy to Cochrane. In his 33 games, he hit .273. From his big-league debut throughout his days in the majors, there were few extended periods in which he sat, due to injury or otherwise.

Heving’s fielding for Philadelphia was superb. In 151 chances handled in 1931, he made only one error, and he didn’t make even one in his 90 chances in 1932, an overall fielding percentage of .996.

Heving was released in December 1932. The next two seasons were spent with the Toronto Maple Leafs. Johnnie’s major-league career was over – the year 1933 saw brother Joe come to the American League, with the Chicago White Sox, just after Johnnie had left.

With Double-A Toronto, Johnnie played 127 games in 1933 (.268) and 67 games in 1934 (.247). In November 1934 he was signed as a player-manager of the Fort Worth Cats (Class A Texas League) for 1935. The season didn’t work out well. Fort Worth finished in last place, despite having the league’s best hitter for average and the pitcher with the most strikeouts. Heving didn’t last the full season; he was replaced as manager and released to Greenwood, Mississippi, of the East Dixie League. Heving refused to report and something was worked out; on August 2 he left to manage the Bartlesville team in Oklahoma.6 He also played 11 games in the International League with the Buffalo Bisons.

Heving was expected to be with Toronto in 1938 (an April story reported), but he does not show up in the team statistics. In 1939 he appeared in ten games with Toronto.

In 1940, 1941, and 1942, John Heving managed the Salisbury Giants of the Class D North Carolina State League, a New York Giants farm club. The 1940 team finished in second place, just two games behind Kannapolis. Heving played in 50 games, batting .247. Salisbury finished second to Kannapolis again in 1941, eight games back, but prevailed in the playoffs, beating third-place Mooresville for the overall title. In 1942, however, as manpower needs for World War II shook up team rosters throughout baseball, Salisbury finished in seventh place (29-69). The league folded, as did most minor leagues, in 1943.

After the war, Heving’s last year in baseball saw him manage the Tallassee (Alabama) Indians in the Class D Georgia-Alabama League.

Heving made his home in Salisbury, remaining there from 1940 until his death on Christmas Eve 1968. First he worked for the YMCA and reported his job as “basket room supervisor,” and then as a pipefitter for the Spencer Shop of the Southern Railroad. It was gastric and duodenal ulcers that hemorrhaged and caused his death. He was survived by Ruth Heving, their daughter, June Lemly, and his brother, Joe Heving.

In addition to the sources noted in this biography, the author also accessed Heving’s player file and player questionnaire from the National Baseball Hall of Fame, the Encyclopedia of Minor League Baseball, Retrosheet.org, and Baseball-Reference.com.

2 The Saginaw News erroneously reported he had been sold to the Cardinals, but subsequent events made it clear it was the Browns.