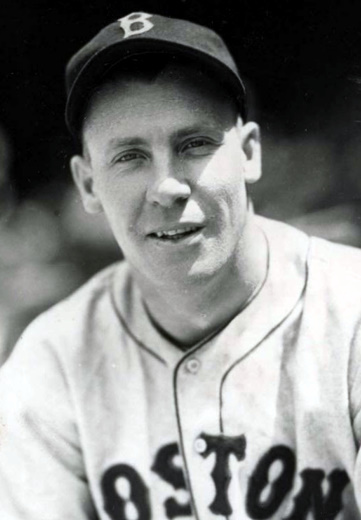 Johnny Marcum was a farm boy from Eminence, Kentucky, the son of Kentucky natives Ben and Grace Marcum. The second oldest of five children, three boys and two girls, he was born on a farm at Campbellsburg, about a dozen miles north of Eminence, on September 9, 1909. When John was three years old, the family moved in order to work as tenant farmers on a plot about five miles out of Eminence. Johnny went to school there, but his only schooling was through the sixth grade. He reported his family background as American and Irish.i

Ben Marcum was known as one of the best semipro pitchers in the area, and his eldest, Tilman (about seven years older than Johnny), followed in his footsteps – though at times Tilman didn’t appreciate having him tag along. “That brother of mine always tried to run me off the team,” Johnny said, smiling. “He was older, and it was true that he was a good player. But I was playing against big fellows and as a pitcher I don’t mind saying that I could always fool the kids around the farm. Maybe that’s why they made me go to the outfield now and then.”ii Ben Marcum never encouraged his sons to take up ball, but he let them take time off from farm chores on weekend days if they had the opportunity to get into a game. Tilman Marcum played semipro ball and got as far as a tryout with the Louisville Colonels in the spring of 1928 but it went no further.

Late in the 1927 season, the Colonels’ business manager Cap (Bill) Neal saw Marcum pitching for a “tobacco plant team” in Eminence and he signed him to pitch for Louisville starting in 1928.iii Marcum was said to have stuck with the team all year, throwing batting practice and only occasionally playing some outfield – though his name doesn’t show up in available team records. Louisville sent him to Dayton under option and he played for the Class B Dayton Aviators in the Central League. There he threw 263 innings, but with a 9-19 record and a discouraging 5.27 earned run average. The team finished 68-69. He pitched most of the 1930 again for Dayton, with a 5.75 ERA and a 6-9 record – but he showed exceptional talent in the batter’s box, batting .421 in 271 at-bats, with 17 home runs.

Manager Allan Sothoron brought him to Double-A Louisville at the end of the season, and Marcum recorded a 4-0 record, and hit .395 in 76 at-bats. Sothoron, a former major-league pitcher, was impressed with Marcum’s batting, but believed he was too lumbering in the outfield and didn’t truly have the fleetness needed to be a successful outfielder. He began to use Marcum less frequently in the outfield, and – after the 1931 season – not at all. In September 1930, Johnny played right field for Louisville during the Little World Series and contributed on offense, hitting at least once in every game. Rochester won the series in eight games.

In 1932 and 1933, Marcum was a full-time pitcher for the Colonels. He was a right-hander as a pitcher, but batted left-handed. He was one inch short of six feet tall, and his weight was listed between 190 and 200. He earned the nickname “Footsie” because he reportedly had “the biggest feet in baseball.”iv In the end, in 11 seasons of minor league baseball, Marcum batted for a .329 average. In the 533 major-league at-bats he later accumulated, he hit .265.

After an 8-9 season in 1932, he had a breakout year and finished 20-13 in 1933 with a 3.74 ERA. Louisville was next-to-last in American Association standings in 1931, and dead last in 1932, and in 1933 (after the league broke into two four-team divisions, they finished last in the East Division. Marcum was one of four pitchers in the league named to the All-Star team.

Marcum got his first taste of the big leagues in September after Connie Mack’s Philadelphia Athletics purchased his contract for $25,000 or $30,000 (and pitcher Jim Peterson) on August 20. Marcum joined the Athletics after Labor Day and enjoyed an impressive start, throwing back-to-back five-hit shutouts against Cleveland on September 7 and the White Sox on September 11. He lost his next two starts, against the Browns and the Tigers, and then posted a 10-1 win, a seven-inning four-hitter effort against the Yankees on September 27. Each of his five starts was a home game at Shibe Park. He finished with a 1.95 ERA and a 3-2 record. Mack admitted that the Athletics had planned to acquire a different pitcher. He sent his son Earl Mack to scout the other man, but his fastball was hampered due to a foot injury he’d just suffered. Earl saw Marcum pitch a strong game at St. Paul. At just this time, the office received a letter that had been sent to all the clubs offering Marcum to the highest bidder. Connie called Earl and got favorable feedback and made the deal the very next day.v

In 1934, Marcum was the winningest pitcher on the Athletics – despite losing his first six decisions and not winning a game until June 17. The team finished in fifth place but Marcum was 14-11 with a 4.50 ERA. In 1935, after being a holdout in the spring, Marcum had his best major league season, a career-high 17 wins against 12 losses with a 4.08 ERA. The Athletics finished in last place, and no other Athletics pitcher had more than nine wins. Marcum was also used as a pinch-hitter by Mack in both 1934 and 1935. An amusing story involved the first game of a June 20, 1935, doubleheader in Chicago. With runners on first and third and two outs, and a rally underway, Mack called for Marcum to bat – but Johnny was resting in the clubhouse before his start in the second game. A teammate ran to find him – quite a distance at Comiskey Park – and another handed him a bat the moment he appeared, so he wouldn’t be delayed on his way to the plate. He stepped into the first pitch, singled in the tying run, was promptly removed for a pinch runner, and returned to the clubhouse. He pitched 11 1/3 innings in the second game, suffering a discouraging 2-1 defeat.

On December 10, 1935, the Athletics traded Marcum and the great slugging first baseman Jimmie Foxx to the Boston Red Sox for $150,000 and a couple of minor league players. For the Athletics, the key to the deal was the money, as Mack was in the process of selling off his best players for badly needed funds. For the Red Sox, owned by wealthy Tom Yawkey, Foxx was the centerpiece while Johnny Marcum was a promising 25-year-old pitcher. Yawkey had bought Lefty Grove from Mack a couple of years earlier, and a few weeks after the Foxx/Marcum deal would acquire Doc Cramer and Eric McNair from the Athletics.

Marcum was a holdout in the spring, asking for $10,000 but reportedly signing for $7,500. “I hope to be worth at least $30,000 to the Bostons this year,” he said.vi He was a little late getting started in April, after some elbow soreness led him to have his tonsils removed at Boston’s St. Elizabeth Hospital.vii With Wes Ferrell, Grove and Fritz Ostermueller on the staff, Marcum was a little overshadowed but he also had an “off” year, 8-13, with a 4.81 ERA.

The year 1938 started out well in spring training with manager Joe Cronin bullish and Marcum willing to imagine the possibility of winning 20. But the 5-6 record he put up may have sealed with fate with the Red Sox. Cronin became disenchanted with both Ostermueller and Marcum, and replaced them in the rotation with Charlie Wagner and Jim Bagby, Jr. Suffering a sore arm, Marcum did not pitch after July 15 and on August 2 he was traded to the Buffalo Bisons of the International League, along with $20,000, for pitcher Bill Harris. In Buffalo, Marcum finished 6-3 with a 4.28 ERA. On December 6, Boston (having regained his contract) traded him to the St. Louis Browns for backup second baseman Tom Carey.

With St. Louis in 1939, Marcum struggled badly and was 2-5 with a 7.74 ERA in the early part of the season. The Browns dealt him to the White Sox for Silent John Whitehead, who was having an equally poor year. Marcum finished 3-3 with a 6.00 ERA for Chicago, after winning his first three decisions. He also suffered a nasty line drive off the bat of Hank Greenberg that struck him over his right eye and knocked him unconscious, but only missed a start or two. At the end of the year, on December 15, the Browns bought back his contract from Chicago – but moved him to their Toledo farm club and he played 1940 through 1942 with the Mud Hens. In 1940, he was 13-12 with an ERA over 5.00, but in ’41 and ’42, he pitched full seasons with an ERA under 3.00 and records of 17-7 and 14-16.

During the war, Marcum stayed out of baseball and worked on his family’s 165-acre farm. Many farmers made their contribution to the war effort in such a fashion.

After leaving baseball, Marcum operated the family’s dairy and tobacco farm in Eminence. He suffered a stroke in 1976, which left his memory impaired. Marcum died on September 10, 1984 at Jewish Hospital in Louisville.

In addition to the sources noted in this biography, the author also accessed Marcum’s player file from the National Baseball Hall of Fame, the online SABR Encyclopedia, the Encyclopedia of Minor League Baseball, Retrosheet.org, and Baseball-Reference.com.

vii Unlikely as this may sound, tonsillectomies were not an uncommon remedy for a number of seemingly-unrelated complaints. He wasn’t allowed to bring a baseball into the hospital, but made one out of gauze and bandages and tossed it around to a willing nurse to keep his arm limber. Hartford Courant, April 10, 1936