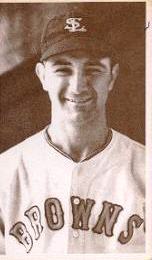 Julio Bonetti entered the majors in 1937 as the second Italian-born player in big league history. At times he wowed with his sinkerball, but wildness kept him from establishing a lengthy career. In early 1941, while with Los Angeles in the Pacific Coast League, he was seen accepting money from a gambler. No one overtly charged him with game-fixing but the impropriety was enough for his expulsion from organized baseball.

Julio Giacomo Bonetti was born on July 14, 1911 in Vado Ligure, Genoa, Italy in the northwestern portion of the country. His father, Paolo Bonetti, a shoemaker, left Italy in October 1912 to find employment in the United States. Julio with his mother Rosa Barile Bonetti and his older brother Joseph arrived in the United States on August 12, 1914. They immediately made their way to San Francisco to meet Paolo, who had settled in the San Francisco suburb of San Mateo. The Bonettis also had a daughter, Linda, born in San Mateo in 1918. Paolo supported the family as a fruit picker and later as a carpenter.

The family moved in the 1920s to San Francisco, where Bonetti attended local public schools. He enrolled in college for two years and worked for a map company. Bonetti, a righthanded sinkerball pitcher, played amateur and semi-pro ball in and around the San Francisco area. He joined his first professional club in 1933, the San Francisco Missions of the Pacific Coast League, at age 21. In 1934 and ’35 he pitched for Rock Island in the Class-A Western League. The latter year he also pitched for Des Moines in the same league for a combined 13-11 record. Back with Des Moines in 1936, he posted a 14-13 record.

That earned him an invitation to join the St. Louis Browns in spring training in 1937. In his first appearance on March 20 in Texas, the New York Times reported that he “baffled the Minneapolis batters with his sinker ball.” The Sporting News noted in 1939 that Bonetti had an “ordinary fastball, but good sinker…makes batters top ball and hit on ground.” He made the Browns club in 1937, becoming the second Italian-born player in major league history, the first being Lou Polli.

In sixteen starts he posted a meager 4-11 record and was demoted to San Antonio of the Texas League in mid-August. He notched a 1-4 record before returning to the Browns a month later. Bonetti rejoined the Browns for spring training in 1938. He pitched in seventeen games in relief before being sent down to Toledo of the American Association at the end of June. Bonetti had failed to develop another strong pitch to go with his sinkerball and was wild; he struck out 50 batters in the majors but walked 77. The Browns picked up Bonetti’s option on September 3, 1938, but sold him outright to Los Angeles of the Pacific Coast League in January 1939.

He had his breakout year with Los Angeles, posting a 20-5 record with a 3.25 ERA. On August 10 he pitched a two-hitter versus Oakland; in the process he threw only 66 pitches, which was believed to be organized baseball’s record at the time. He also knocked in the only run that day. Los Angeles’ parent club, the Chicago Cubs, purchased his contract eight days later, but allowed the Angels to keep him for the rest of the season. Bonetti joined Chicago for spring training in 1940 though. He impressed in early workouts but only appeared in one game for the club during the season, a 1 1/3 inning relief stint on April 22. He was sold back to Los Angeles on April 26. A sportswriter described him as “gloomy” because he didn’t think the Cubs had given him a fair trial.

Bonetti won fourteen games for the Angels in 1940 and set a PCL record, later broken, for pitching 64 consecutive innings without a walk. With Los Angeles in 1941, he won seven times in the first half of the season. On July 2 National Association president William Bramham placed Bonetti on the ineligible list, effectively banning him. It was the result of a two-month investigation by Bramham’s office, Los Angeles district attorneys and a private investigator hired by the Angels. Bramham stated that in early May Bonetti was seen talking with and accepting money from Albert J. Reshaw, a reputed bookmaker and racehorse owner. Later that day Bonetti pitched against Hollywood during a 10-3 loss. Reshaw was also overheard offering bets on Hollywood with 10 to 8 odds. Bonetti started the game but was relieved with the Angels trailing 4-3.

Bonetti denied being asked to throw the game and further declared that he wouldn’t do so. Regardless, Bramham expelled him, reasoning, “There is no charge that he did throw a game, but the conduct of the player in this matter, his repeated false statements when he was asked to tell the truth, his association with the gambling element and his confession that he permitted himself to be used as a medium to place bets on horses between two gamblers is sufficient to require his disassociation from professional baseball and he is placed upon its ineligible list.”

Bonetti applied for reinstatement at the National Association meeting in Cincinnati on September 5, 1941, but was denied. Unable to work within the game, he toiled as a carpenter like his father and also worked as an athletic instructor and involved himself in church activities. On August 8, 1942, he enlisted in the Army and was assigned to the 15th Medical Regiment in Texas. He was the regiment’s star pitcher.

On June 17, 1952, Julio Bonetti died at his home in Belmont, California, after a heart attack. He was forty years old. He left a widow, Betty, and two children. Bonetti was interred at Holy Cross Cemetery in Colma, California.