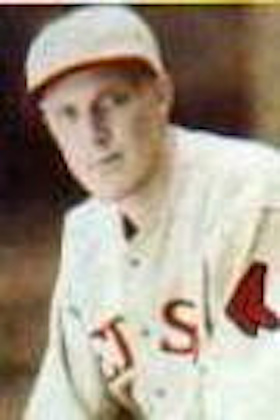 Given an opportunity to pitch in the major leagues for a team that was nearly desperate for pitching, Larry Boerner fell short. From 1922 through 1930, the Boston Red Sox had finished in eighth place – last place – every year except 1924, when they finished seventh. In 1931 they finished sixth and one could try to find some hope in that, but in 1932 they were last again. It was in June 1932 that the Red Sox gave Boerner the chance to pitch in the big leagues. He joined a staff that had only one 10-game winner, Bob Kline (11-13), and posted a team earned run average of 5.02.

He attended Western Maryland College at Westminister, Maryland, for three years, but even before that had played semipro ball with the Epiphany team in the D.C. area. At age 17, he caught the eye of Clark Griffith, but “Griff had to let him go because of the player limit.”1 His first season in professional ball was with the Norfolk Tars in the Class-B Virginia League, in 1927. Boerner had a heavy load; he threw 277 innings in 43 games and was 13-14, but with a good 3.28 earned run average. In September it was reported that Boerner would advance to Toledo, in the Double-A American Association, in 1928.2 The Mud Hens welcomed their new purchase in the spring time, but he was wild and Toledo promptly farmed him out to the Peoria Tractors, in the Class-B Three-I League.3 He wasn’t with Peoria long, though he did manage to work 13 innings of relief in two games of a doubleheader. Toledo manager Casey Stengel brought him back to Toledo, but within a couple of weeks, when the team added Rufus Smith, they sent Boerner to Waterbury on July 10.4 Waterbury was a Class-A team; Boerner was apparently 0-4 with them.

On the first of September, Boerner was sold to Raleigh.5 He wound up, however, pitching in Class C for the Henderson Bunnies of the Piedmont League in 1929. One might wonder if he was a little discouraged with all the shifting around from team to team. On May 31 and June 1, he was knocked out of the box in back-to-back games, and on June 3, he was fined $100 and suspended indefinitely for “indifferent playing” (two of his teammates were released.)6 He had a 4-6 (5.81) record. On June 18 he was sent to Charlotte on option. That was a promotion; the Charlotte Hornets were in the Class-B South Atlantic League. If he’d truly been indifferent, securing an opportunity to move up may have energized him. He was 11-7 (2.61) at Charlotte.

Boerner, the Charlotte Observer reported after the season, “is ambitious and may quit the national pastime for training with a law firm.”7

Boerner pitched for the Hornets again in 1930, but was only in 15 games, 5-4 with a 5.38 ERA. It had been assumed he’d have moved up, since he was among the best in the league in ERA in 1929, but the Observer‘s assessment was that he had been “a sick man when he first came here this spring. He was far off in weight and had no business trying to pitch ball.”8

Boerner graduated from the University of Maryland and was studying law at the National Law School in Washington. He also wrote about sports for the Charlotte News.9 On June 16 he was suspended to make room for an outfielder acquired from Baltimore.10 On July 13, the Charlotte Observer, which had sometimes dubbed him “Lawyer Boerner,” announced that Boerner was optioned to Pensacola.11 On August 11, Charlotte released him unconditionally.12

Boerner lost almost a year, having 14 teeth pulled in 1931, after an infection had set in (he’d been kicked in the face by a mule several years earlier.13 He pitched some in 1931 for both Richmond and Norfolk in the Eastern League. Statistics are sparse. He coached the University of Virginia baseball team, then pitched for a while in West Virginia in the Tri-State League.14 At least one story later in the year showed him playing what appears to be semipro ball for the Howitzer Giants and the Skinker Eagles, pitching against Rockville in early August.15

The St. Louis Cardinals signed him over the winter and brought Boerner to spring training in 1932. Near the end of March, he was assigned to Greensboro. A ball struck him in the eye during the springtime. After a brief recuperation, he was unconditionally released after he had declined assignment to Elmira.16 At the very end of June, he signed with the Red Sox, the Boston Globe reporting that the team had “signed a right-handed pitcher named Boerner.” The Red Sox had played in Washington on June 25 and 26. Boerner had “worked out with the team in Washington, and Mr. [Bob] Quinn decided to give him a trial.”17 And why not? The Red Sox were already 32 ½ games out of first place.

Boerner debuted in the majors on June 30 at Fenway Park. The visiting New York Yankees teed off on starter John Michaels, scoring three runs in one-third of an inning. Pete Appleton relieved Michaels and was able to close out the first, but he was hit for 10 more runs (five unearned) in 5 1/3 innings. Boerner came in with the Red Sox losing, 13-0. Manager Marty McManus likely asked himself, “Why not?” and gave Boerner the ball. He worked 3 1/3 innings and pitched better than the others, giving up two runs in the ninth. He gave up no runs at all in his second relief stint, on July 7.

McManus gave him a start on July 15, and he pitched decently – carrying a 2-2 game against the White Sox into extra innings. He started off with five innings of no-hit ball, and pitched 10 2/3 innings in all, but was touched for the final runs and lost the game, 4-2 in 11. Six days later, he pitched against the Yankees in New York, allowing just two hits in seven innings, but got a no-decision. Three days after that, he stumbled against the Senators, allowing five runs in two innings and bearing the loss. He was given two more starts, losing 7-3 against the Browns on July 31 and 13-2 (five of the runs were charged to him) to the Athletics in the first game of the August 13 doubleheader. The four losses made him 0-4. He also worked in 16 games in relief without a decision. He stuck with the Sox through September.

Boerner’s own ERA was coincidentally the same as the team’s – 5.02.

The Red Sox didn’t see a future for him, however, and released him outright to Nashville on January 16, 1933 as part of an overall housecleaning.18 Nashville sent him to the Jersey City Skeeters, where he faced the Red Sox on April 3, losing 6-0. Once the season began, he apparently appeared in just two games for Jersey City, finishing his professional career with a 0-1 record.

Later that year, he is found pitching for Front Royal in the Intercity League around Richmond. 19 He did so again in 1934 and 1935.

For whatever reason, perhaps the Great Depression, Boerner – who had practiced law in the winters while he was still pitching – is found in the 1940 census living in the home of his father-in-law Roger Payne, an insurance agent. Boerner’s wife was the former Nellie Payne. They had married in 1934. Boerner himself was listed as a traveling salesman, dealing in medical supplies.

There was a second marriage, to Katherine “Kay” Hollen, in 1955. At the time he completed his player questionnaire for the National Baseball Hall of Fame in 1960, he provided his occupation as a self-employed mortgage loan broker specializing in procuring construction loans for builders and real estate brokers.

His last residence, according to the Social Security Death Index, was in Arlington, Virginia, but when Boerner died of a cerebrovascular incident on October 16, 1969, it was actually in the city of his birth – Staunton, Virginia, at Western State Hospital. He is buried in Petersville, Maryland.

7 Charlotte Observer, November 1, 1929: 25. The Observer reported that Boerner was studying law at the University of Maryland.