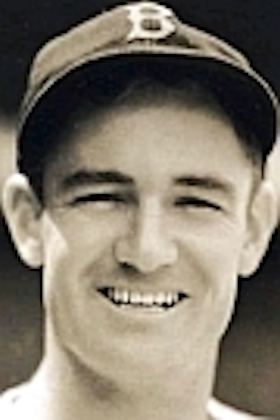 Lee Otis Rogers appeared in 28 major-league games, 14 for the Boston Red Sox and 14 for the Brooklyn Dodgers, but never got a base hit.

He was a pitcher, and a left-hander at that, and he capped off a stellar college career at the University of Alabama by signing with the Red Sox.

Rogers was born in Tuscaloosa on October 8, 1913. His father, James, was a farmer who died the year Lee turned 8. His mother, Mattie (Johnston), found work as a saleswoman in a dry-goods store in nearby Holt, Alabama, and Lee spent all 12 years of grade school and high school progressing through the Holt public schools. At the time of the 1930 census, he had a brother, Victor, one year younger.

Lee attended and graduated from the University of Alabama, and that’s where he first attracted big-league scouts. By the time he pitched his final college game, “there seemed to be enough scouts lurking about to form a special venire.”1

The Red Sox had seen Rogers before. On April 6, 1934, they played a spring exhibition game in Tuscaloosa, beating the university nine, 11-3. The four Alabama pitchers walked 15 Red Sox batters. But Rogers stood out. He started the game and gave up three hits and two runs in the first inning, but then shut the Red Sox down with just one more hit over the next three innings. Mrs. Tom Yawkey, Elise, was an alumna of the university.

Rogers also played football in college, and was an end on the Alabama team that beat Stanford, 29-13, in the Rose Bowl on January 1, 1935.

Pitching college ball for the Crimson Tide, Rogers threw two shutouts against LSU in 1935, and his three-hitter on May 11 against Mississippi State won Alabama the championship of the Southeastern Conference. There was word that scout Ernie Johnston of the Red Sox was close to signing him; indeed, the headline on one story made it a fait accompli.2 Rogers had “flattering offers from several big league clubs” but decided to go with the Red Sox.3

Indeed, the signing occurred. Rogers was rated quite a prospect. In eight consecutive games in the 1935 university season, he hadn’t allowed even one earned run. Going for a ninth, he faltered. He had thrown 53 consecutive runless innings. He won nine of Alabama’s 10 wins in their 1935 championship season. It was their third championship in a row. Working under coach Hank Crisp, Rogers lost only two games in his junior and senior years combined.4 After signing, Rogers was assigned to Boston’s farm team in Charlotte.5 The signing was for a reported $4,000 bonus, big money during the Depression.6 Rogers was, in Earle Watson’s words, “rugged, well-sculptured, and the cleaner sort” with elan and with “an easy, effortless grace about his delivery that is reminiscent of the style of the great Grove.” Rogers was 5-feet-11 and listed at 170 pounds. He threw and batted left-handed.

With the Class-B (Piedmont League) Charlotte Hornets, Rogers was 6-7 during 1935 with a 3.78 ERA but earned a promotion to the Little Rock Travelers in early August, and was 7-2 with a 2.22 ERA in the Class-A Southern Association.

Rogers was thrilled to see the size of the salary the Red Sox offered him for 1938 – until on closer inspection he saw the name on the contract he’d been mistakenly mailed. The contract was meant for Johnny Marcum.7 Both pitchers made the team. Late in spring training, there was a game in Danville against the Cincinnati Reds. Marcum left with a 12-2 lead. The Red Sox added two more, but a couple of other Red Sox pitchers let in 11 runs for the Reds and it was 14-13. Rogers faced a bases-loaded situation in the ninth and struck out Alex Kampouris for the win.

Rogers made his big-league debut on April 27, 1938. He pitched 2? innings of relief in Washington, allowing the Senators three hits, but the Boston Globe‘s Hy Hurwitz explained, “Two of the three hits off him were scratchy.”8 Rogers got his first win on May 14, when he threw a scoreless 11th inning, and then saw the Red Sox beat the Senators, 10-9. The first run he surrendered was in his fifth outing, his first start, a no-decision on June 8. Rogers pitched in 14 games for Boston through August 12 and was 1-1 with a 6.51 ERA. After that day’s game he was traded to the Brooklyn Dodgers for right-hander Johnnie Chambers, who never pitched in the majors more than the two innings he’d worked the year before. The Globe story said the Dodgers bought Rogers and optioned Chambers to Minneapolis; the New York Times agreed and suggested that $10,000 changed hands.9

Rogers pitched in 12 games for the 1938 Dodgers. His first game was in Boston, against the National League Boston Bees. He lasted only 2? innings and gave up five runs, taking the loss. His only other start also resulted in a loss, on September 25 against the Phillies. Rogers’s final two appearances in the big leagues were both as a pinch-runner, on the 27th and 29th.

Rogers had a good eye at the plate, taking four bases on balls in 11 plate appearances. He was 0-for-7 in at-bats, but could boast a .364 on-base percentage.

Rogers had three more years in baseball. He was 8-12 for the Montreal Royals in 1939, though with a 4.79 ERA. That October 14, he married Maude French. He sold insurance in the offseason.

On April 8, 1940, the Nashville team purchased Rogers from Montreal. He worked for the Volunteers, but was sold to Minneapolis at the end of July. He appeared in two games and was sold to Little Rock again on August 3 – his first opponent being his former team, Nashville, on August 6, a 4-2 loss. He had no decisions in his brief 11 innings with Minneapolis, but with Nashville and Little Rock combined, he was 8-8 in 1940 with a 5.91 ERA. Rogers’s final season was 1941, when he was 0-1 in 10 innings over eight appearances for Little Rock.

Rogers purchased a share in Spaulding Athletic Goods Company, a sporting goods store in Little Rock and owned and operated it until 1980.

Rogers served in the US Navy in 1944 and 1945, but returned to Little Rock after the war. Looking back in 1979, he said, “Although my baseball days in professional leagues were not many, I did get many thrills from those experiences and it still means a great deal to me. To play on the same team with Foxx, Cronin, Grove, Wilson, Cramer, Doerr, and all the others was just great.”10 He added, “I have continued my interest in all active sports. My hobby has been officiating football and now is tennis. In football officiating, I worked fifteen years in the Southwest Conference.”

After selling his interest in Spaulding, Rogers became vice president of The SportStop, owned by his son Jay. He and Maude had two sons and a daughter. In 1982, Lee Rogers was elected to the Arkansas Sports Hall of Fame. He served as president of the Little Rock Boys’ Club and was active in other civic organizations. He joined forces with Little Rock’s Brooks Robinson to raise more than $100,000 to renovate a local ballpark to be used for American Legion and Boys’ Club baseball.

Lee Rogers suffered a heart attack on October 28, 1995, while in the stands watching the Auburn-Arkansas football game at Little Rock’s Memorial Stadium.11 He died on November 23 in Little Rock.

4 The May 16 Boston Herald announced the signing; the May 17 Advocate explained he would report upon his graduation. See also the Earle Watson article. An Associated Press dispatch on June 1 outlined his senior year stats; see, for instance, Springfield, Illinois’ Daily Illinois State Journal, June 2, 1935: 15. Rogers joined the Hornets the first week of June.

5 Sometimes the dealings were a bit complex. Rogers was initially signed to a Boston contract, then traded to their Syracuse Chiefs farm club on May 31.