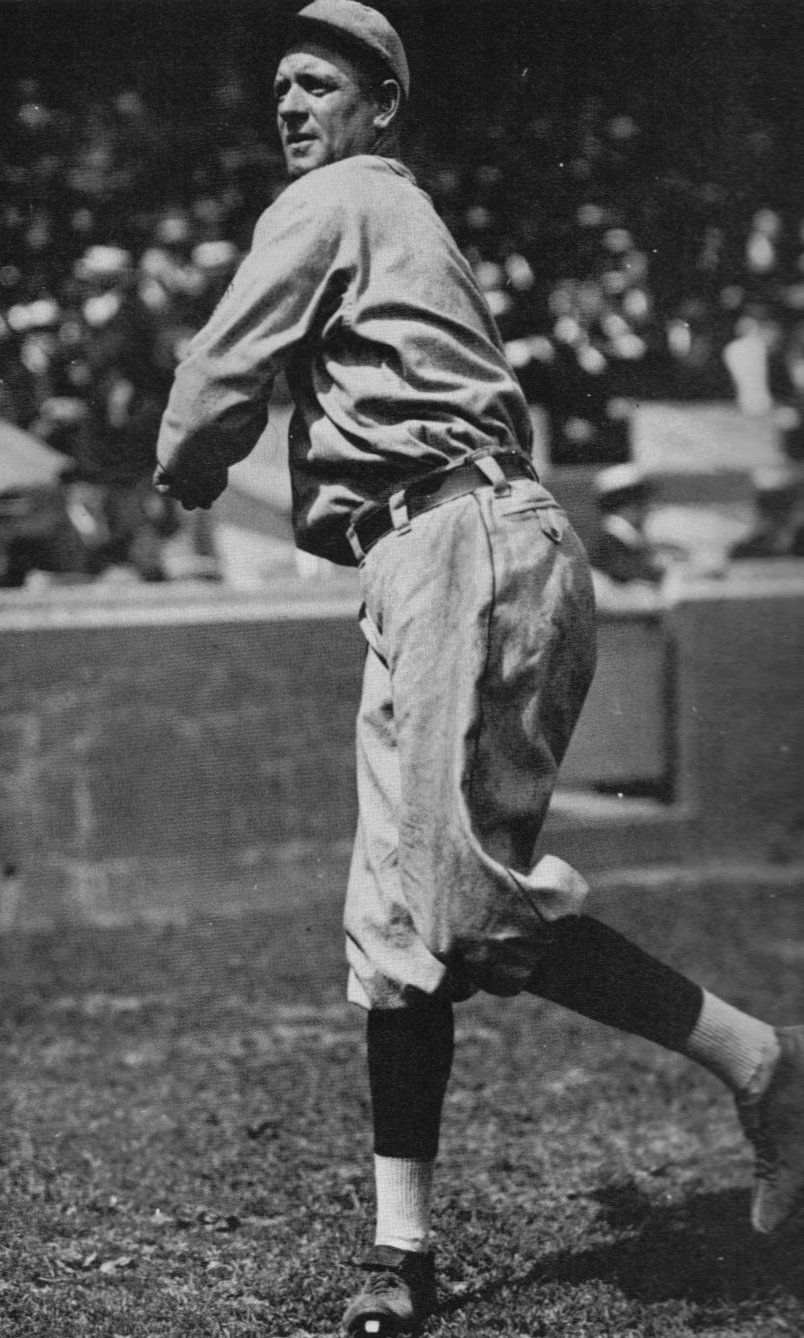 “Lefty Leifield was one of those ain’t-got-a-thing pitchers who never threw a ball where the batter wanted it,” wrote The Sporting News. Leifield won 103 games during his six full seasons with Pittsburgh from 1906 to 1911, more than any other Pirate pitcher over that period, and his lifetime ERA of 2.47 over 12 seasons is in the top 50 in the history of the game. Lacking an overpowering fastball, a sharp-breaking spitter, or a truly devastating curve, he relied instead on the element of surprise — throwing curves on two-and-nothing and three-and-two counts — and his ability to locate pitches with pinpoint accuracy. Lefty recalled one particular episode from late in his career: “I had Shano Collins three-and-nothing once and threw three straight strikes by him. Right after that, Buck Weaver, his teammate, told Shano, ‘Why in the world were you waiting for a walk? This guy Leifield hasn’t walked anyone since Garfield was shot.’”

The fourth oldest of nine surviving children of Henry and Margaret Leifield (three of the couple’s children died in infancy), Albert Peter Leifield (alternately spelled Leifeld) was born in Trenton, Illinois, on September 5, 1883, at least according to most sources. Census records from Albert’s childhood, however, indicate that he was born in 1882, not 1883, so it seems likely that the date of birth listed in his baseball records was fabricated to make him appear younger than he actually was. Albert was two when his father, a $65-a-month policeman, moved the family from Trenton to a flat in the Fairgrounds section of St. Louis, situated at the nexus of St. Louis baseball in the late-19th century: both the original Sportsman’s Park and Robison Field were located just a few short blocks away. For a time Albert attended grammar school at Holy Trinity, but his father’s death in 1900 forced him to quit school and work in a shoe factory for $2.50 a week — a five-and-one-half-day week, at that.

In 1902 Leifield caught on as a pitcher with the team from nearby Alton, Illinois, of the independent Trolley League. From there he quickly ascended the rungs of the minor-league ladder, pitching for Joplin of the Missouri Valley League in 1903 and Des Moines of the Western League in 1904. After going 26-9 for Des Moines in 1905, Leifield received a late-season trial with the Pittsburgh Pirates. In his major-league debut on September 3, he pitched a shutout against the Chicago Cubs in a six-inning game shortened because both teams needed to catch trains. Lefty ended his month with the Pirates at 5-2 with a 2.89 ERA, earning a shot at the starting rotation for the following season.

Veteran stalwarts like Vic Willis, Sam Leever, and Deacon Phillippe, all in their 30s, led the Pittsburgh pitching staff in 1906, but the young Leifield more than held his own. He compiled a record of 18-13 with 24 complete games, finishing in the Top Five in the National League in ERA (1.87) and shutouts (8). Leifield’s greatest achievement of the campaign came in the morning game of an Independence Day doubleheader against the Cubs. Taking a no-hitter into the ninth inning, Lefty allowed a lone single to Jimmy Slagle, who eventually scored the game’s only run with the assistance of an error. The winning pitcher, Mordecai Brown, also finished with a one-hitter, giving up just a single by Leifield.

In 1907 Leifield won 20 games while leading the Pirates in strikeouts and shutouts and posting a 2.33 ERA. The following year he shaved his ERA to 2.10 and won 15 games, one of five Pittsburgh pitchers with 15 or more victories. Lefty sometimes had a tendency to be too fine in locating his pitches, and in those two seasons he walked nearly as many batters (186) as he struck out (199). Yet he continued to post low ERAs, which he attributed to the exceptional defense of his teammates, especially his shortstop. “Hans Wagner was the grandest player that I ever looked at,” Lefty said. “He could hit anything, field anything, and steal bases on any catcher or pitcher in the business. And he never made a mistake.”

In 1907-08 Leifield also had a knack for keeping the ball in the park; he allowed only two home runs in 504.2 innings, a remarkable ratio even for the Deadball Era. Unfortunately, he must have lost the knack by 1910-11, when he gave up 13. “One game the first two batters, Josh Devore and Larry Doyle of the Giants, each hit the first pitch for home runs,” he recalled. “[Fred] Clarke charged in from left field and said, ‘I don’t care if they kill you today, but you’re going all the way.’” Even though the legendary player-manager could be tough on his pitchers, Lefty remembered him as open to new ideas. One year Clarke scoffed when Leifield showed up at spring training with a soccer ball. “A couple of years later, though, Clarke was convinced that kicking a soccer ball helped condition our legs and he had me and Bobby Byrne bring along some extra balls,” Lefty recalled.

In 1909 Leifield enjoyed another outstanding season — a 19-8 record and 2.37 ERA — but in Game Four of that year’s Fall Classic he was roughed up by the Detroit Tigers, lasting only four innings before being lifted for a pinch hitter with the score 5-0 against him. Even though he was tagged with the loss, he considered his lone appearance in a World Series as one of his top thrills in baseball, and 57 years later he still remembered to the penny the amount of his winner’s share. “It was only $1,825.22, but it seemed like a million dollars to us,” said Leifield, whose top season salary was $3,500. “There was nobody around to dig into your pockets for income tax then. You could get 14 ounces of real beer for a nickel, and six loaves of bread for a quarter.”

As the Pirates plunged towards .500 over the next two seasons, so too did Leifield. He was a combined 31-29, even though his ERAs of 2.64 and 2.63 were still about a half-run better than the NL average, and he remained a workhorse, leading the Pirates in appearances both seasons and ranking third in the league in innings pitched (318) in 1911. But a sore arm caused Lefty to pitch poorly and infrequently in the first weeks of 1912, and on May 30 the Pirates traded him and Tommy Leach to the Chicago Cubs for pitcher King Cole and outfielder Solly Hofman. The trade was big news — Leifield and Cole were former 20-game winners and Leach and Hofman were highly respected veterans — even though all four players were over the hill. Lefty pitched considerably better with the Cubs, winning seven out of nine decisions and posting a 2.42 ERA, but before the end of the 1913 season he was out of baseball.

Arm troubles again were the culprit. After posting an ERA of 5.48 over six games early in the 1913 season for the Cubs, Leifield was sold to Atlanta of the Southern Association. He refused to report, instead returning to St. Louis where he worked in a saloon and a grocery store. Before long, however, his arm began to regain its strength and he returned to baseball with San Francisco of the Pacific Coast League that very same season. He pitched the next four years in the minors with San Francisco and St. Paul, finally working his way back to the majors with his hometown St. Louis Browns during the war-torn season of 1918. Now in his mid-30s, Leifield pitched mostly in relief and went 2-6 with a respectable 2.55 ERA.

The following year he improved his record to 6-4, and one of his victories was a one-hitter against the Boston Red Sox (Ossie Vitt ruined the no-hit bid with a slow roller in the seventh inning). Leifield appeared to be on his way back, but in 1920 he pitched only nine innings (and was blasted for 17 hits) before the Browns released him.

Following the end of his playing career, Leifield coached for the Browns, Red Sox, and Tigers, and managed in the minors for seven years, winning an American Association pennant with St. Paul in 1931. He was highly regarded as a fungo hitter. “I’d run the boys ragged with my fungo bat in spring training and when they came north, they were in good condition,” he recalled. Leifield worked in the St. Louis water department for 26 years until failing eyesight forced him to retire in 1962. Married with two daughters, Lefty spent his last years fishing, betting on horses, and taking in an occasional game at Busch Stadium. He died in Fairfax, Virginia, on October 10, 1970 at age 87.

An earlier version of this biography appeared in SABR’s “Deadball Stars of the National League” (Brassey’s, Inc., 2004), edited by Tom Simon.