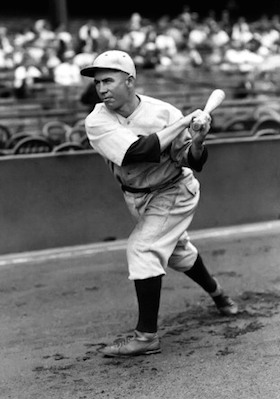 These days, a man coming from Gayville might be taunted in some circles, feted in others. There appear to be two Gayvilles in South Dakota, one an unincorporated place on the western edge of the state and the other a town in Yankton County in southeastern South Dakota. In 2010, the population was 407. In 1907, when Marvin Clement Olson was born on May 28, it was a lot smaller. It is “the self-proclaimed ‘Hay Capital of the World.’ Gayville is also constantly in competition with nearby Meckling, the self-proclaimed ‘Hay Capital of the Universe.’ “1 They are the only Gayvilles listed in the United States, aside from two hamlets both in New York state. There is also a Gayville in Ireland, in County Westmeath.2

Unsurprisingly, Marvin Olson’s parents were farmers. Iver Olson was born in South Dakota, and both of his parents were Norwegian. His wife, Gustava, was a German native. Marv had a brother, Ernest, who was two years older.

At the age of 24, Marv found himself playing baseball in the major leagues.

He’d attended Luther College in Decorah, Iowa – an undergraduate liberal arts college founded in 1861 by Norwegian immigrants and affiliated with the Lutheran Church. The college has produced two other major leaguers – Harvey Kuenn (who played 15 years with the Detroit Tigers, and managed Milwaukee for three seasons) and Ossie Orwoll (who preceded both Olson and Kuenn, playing in 1928 and 1929 for the Philadelphia Athletics). There have been seven others in SABR’s minor-leagues database.

Both Ernie and Marvin Olson were “baseball stars” at Luther and a brief Associated Press story reported in May 1928 that they had both been offered contracts with the St. Louis Cardinals but they declined, preferring to continue their studies.3 Marvin was said to have played basketball and football at Luther as well, though he was far from a large man – listed at 5-feet-7 and 160 pounds, a right-hander.

Marvin played semipro ball, working at second base for the Stock Yards team of Sioux City. On September 3, 1930, it was announced that he had signed with the Boston Red Sox and would report in the spring of 1931.4

The Boston Herald noted the signing a couple of weeks later, saying Olson had been signed on the recommendation of Steve O’Rourke and that both the Cardinals and the Chicago White Sox had sought his services.5 Red Sox president Bob Quinn was very optimistic about Olson, saying, “Never have I heard so many good things said about a rookie the Boston team has picked up. … There will be a number of false prophets around throughout the middle west if Marvin Olson does not prove to be an A. Number One second baseman for the Red Sox this coming season.”6 Quinn credited O’Rourke for beating out other respected scouts: “Olson is an example of what a scout can do for a club sometimes. Steve O’Rourke got Olson for us, and signed him to a contract, not because Boston offered so much more money than other scouts, but because Steve made a friend and an ally of the boy.”7 Olson had been, Quinn concluded, the most sought-after player in the Nebraska-Iowa territory.

In professional baseball, Olson was an infielder, typically a second baseman in the earlier part of his 17-season career and a third baseman in the second half. His time in the majors was exclusively with the Boston Red Sox and he played 122 of his 123 games in the field at second base, the other one at third.

Olson joined the Red Sox for 1931 spring training at Pensacola, Florida. When the first cutdown occurred, on March 12, Olson was farmed out to Buffalo (International League). Buffalo manager Jimmy Cooney had need of a second baseman and Olson fit the bill. He appeared in 160 games, getting plenty of work in, and acquitted himself well, batting .292 (with just one homer) for the last-place Bisons. Olson was called up to the Red Sox on September 11 and got into his first big-league game on the 13th.

Olson’s debut game was the nightcap of a doubleheader, a 14-inning 2-2 tie played at Braves Field, Boston, against the visiting White Sox. Olson was 1-for-5 with a single for Red Sox manager Shano Collins. The Boston Globe run a subhead “Young Olson Promising” and said as much in the coverage: He “made a favorable impression.”8 He handled 11 chances on defense, and drove in the second of the two Red Sox runs with a “sizzling single to left field.” He also drew a base on balls.

The very next day, Olson played again and drove in two runs and scored three in a 12-8 win over the White Sox, this time at Fenway Park. Two games and he already had a RBI in each of Boston’s two major-league ballparks (the September 13 game was played at Braves Field because Sunday baseball was not yet permitted at Fenway Park.)

Olson appeared in 15 games in all, collecting 10 hits in 53 at-bats (.189), but had a .306 on-base percentage due to the nine walks he had worked – he’d walked at least once in each of his first five games. He drove in five and scored eight times. After the season, in mid-October, Collins said, “That Olson boy is a good fielder and a hustler. I hope that he can do his share of hitting against big league pitching.”9

The Red Sox needed a second baseman for 1932 and in spring training looked over Wally Dashiell from Chattanooga in the Southern Association (he’d played one game for the White Sox in 1924), but Olson got the job, and appeared in 115 games, pretty regularly from May 6 on. Things had changed from the year before and now the initial hesitation had come from his fielding, not his hitting. The Boston Herald said, “His fielding lapses are inexplicable, for a year ago he was a sure-fisted young man. The trouble then was with his hitting. We hope he is not the type who needs adversity in one department to make him shine in another. If he can steady afield and continue his hitting, he will be a great asset to the team.”10

For someone who played in as many games as Olson did, the 25 RBIs he had in the 1932 season seem remarkably few, but he did get on base (he hit .248, but had a .347 on-base percentage) and scored 58 runs. He committed 28 errors, for a .955 fielding percentage. There appears to be no particular standout game. Only four times did Olson drive in two runs in a game, and in none of those times were the runs decisive. He doesn’t seem to have earned a headline for himself in either the Boston Globe or Herald, though he did rate the very occasional subhead. The Herald did acknowledge his work at the tail end of the game notes on July 18: “Marvin Olson seems to be more than making the grade – a little fellow who is like Maranville in hustle, will to win and enough power to be dangerous at bat.” Of course, this is with the perennially last-place Red Sox so making the grade wasn’t reaching an especially high bar. About a third of the way through the season, Shano Collins was replaced by new manager Marty McManus. The Red Sox finished last again, winning only 43 games and losing 111.

Olson spent the winter hunting wolves and coyotes along the Missouri River near his home. He was the last one to sign a contract for 1933. There’s no indication that the Red Sox took any punitive measures, but Johnny Hodapp won the second-base slot in spring training and Olson appeared in only three April games, twice as a pinch-runner. The third time, on April 30, he struck out in his only at-bat of the season; it was his last at-bat in the big leagues. On May 15 the Red Sox traded Olson, outfielder Johnny Watwood, and “a bag of money” to the Newark Bears for outfielder Dusty Cooke.11 Tom Yawkey was the new owner of the Red Sox and he had many bags of money.

Newark was a Yankees farm team. Olson began a lengthy minor-league career that extended all the way into the 1947 season. He hit .279 in 82 games for Newark in 1933. He was dealt to Baltimore in November, one of four players traded for Don Heffner. He then made his way on to Buffalo; he hit a combined .273 for both teams in 1934. Olson played all of 1935 through 1938 for Buffalo, though his batting average declined each year one to the next, from .327 down to .225 in 1937, just ticking back up three points in ’38.

In early April 1939, Olson was purchased by the Chattanooga Lookouts. The Southern Association was Class A1, just a notch below the Double-A Buffalo Bisons. He played four-plus seasons for the Lookouts, again generally starting with a good average (.280 and then .319 in 1940), but then declining to .227 in 1942.

He still lived in Gayville throughout and at the time of the 1940 census was living there with his parents, Ernie, and his wife, Vera, a Nebraskan by birth.

In August 1941 Olson took over as manager of Chattanooga, replacing Kiki Cuyler. Taking on the additional responsibilities saw him play fewer games in 1942. He managed the Lookouts for three years, through 1943. The team moved to Montgomery during 1943 and advanced to fourth place in that year’s standings. As a manager, he was known as Sparky Olson. He was with the team in 1944, but he had badly injured his leg – and “Scrappy” (William Moore) took over from “Sparky” as manager before the season began. Olson appeared in only 22 games.

In 1945 Olson signed with Syracuse in April, his last full year as a player. Beginning in 1946 and through 1949, he was manager of the Class-D PONY League team in Jamestown, New York. He played some the first two years, but not at all the latter two.

For many years, Olson scouted for both the Kansas City Athletics (1957-1961) and the Minnesota Twins (1962-1986) before retiring in 1986. He is credited with signing Dave Duncan, Dick Green, and Dave Thies for the Athletics, and Eddie Bane, Jerry Crider, Bob Gebhard, Danny Monzon, and Bryan Oelkers for the Twins. In 1975 he was inducted into the Luther College Athletic Hall of Fame. A lengthy article about Olson and scouting appeared in the July 4, 1982, New York Times.

Olson died on February 5, 1998, at Tyndall, South Dakota. He is buried in the Gayville Cemetery.

1 Everyone knows that quoting Wikipedia is not academically respectable, but this quotation from the page on Gayville, accessed on April 10, 2015, was too good to pass up.

2 For that matter, there is a website www.gay-ville.com, which caters to the “unique travel needs of the LGBT (Lesbian, Gay, Bisexual, Transgender) community.”

4 Omaha World Herald, September 4, 1930. There was another Marvin Olson who played for a number of semipro teams in Omaha, but he was a pitcher and not to be confused with the one who made the majors.