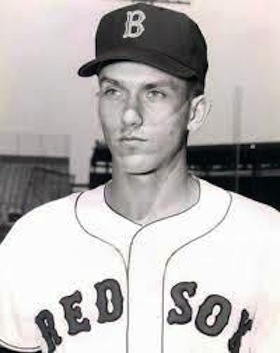 A standout pitcher at Elizabethtown High School (he lettered in basketball and football as well, and graduated in 1951) and in two years at Elizabethtown College, Chittum served in the US Army from 1953 to 1955. Chittum was signed by scout Fred Dorman of the St. Louis Cardinals in October 1953, just before his induction, for $250 a month. (He hadn’t known he might have been able to get some bonus money.) In August 1954, while still in the Army, he married Shirley Faye Stahl. They had one child, Nelson Bruce Chittum. (“Same initials, but not Junior. We call him Bruce,” he told a Boston sportswriter.1 The Army stationed him in Germantown, and he was able to play semipro baseball in York County during the summers. He recalled, “They’d pay me 25 bucks to pay and I would pay somebody 10 bucks to take my KP.”2

Needing a strong game after wavering in his first career start, Chittum started against the Philadelphia Phillies in a home game on the 20th. He was knocked out in the third inning after yielding four runs. He’d appeared in 13 games by season’s end and finished with a record of 0-1. His loss came to the Pittsburgh Pirates at home on August 27 when he gave up three runs in three innings. After that game, manager Fred Hutchinson placed Chittum in the bullpen – a move that proved permanent for the right-hander’s major-league career. Chittum’s ERA, which stood at a whopping 16.88 after his two horrid starts, was 6.44 by season’s end. He played for Licey, in the Dominican Republic, over the winter. “That was a big mistake,” he told writer Burt Wilson. After the season, the Cardinals fired Fred Hutchinson and hired Solly Hemus. Had Chittum gone to Japan with the Cardinals for a number of exhibition games, rather than to winter ball, Hemus would have gotten to know him better.4

Chitttum once described his pitching style: “I threw everything but the ball. I’d throw ’em the arm, the elbow, the glove, and then I’d throw the ball…I had a good sinker, a good slider, good location. I didn’t walk anybody, didn’t strike out many guys but kept the ball down, made ’em hit ground balls, pop flies.”7