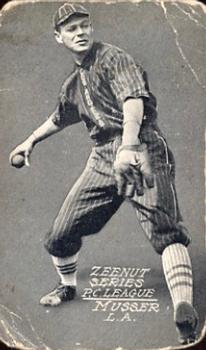 Two brief stints in the major leagues with six years in between. But right-handed pitcher Paul Musser also enjoyed a full 15 years in the minor leagues, with four 20-win seasons. He began pitching professionally in 1909, the year he turned 20. He was born on the 24th of June in 1889 in Millheim, Pennsylvania.

Of German descent, his parents were Clark and Margaret Musser. Both were native Pennsylvanians, Clark Musser working as a marble cutter, as did their two oldest sons, Lester and John. The couple had eight children; Paul was their sixth. He went through the public schools and then on to Susquehanna University for two years (he never obtained a degree).

Musser’s professional career grew out of beginnings that are unclear today. We find him listed on the roster of Williamsport before the 1909 season began.1 Working for Altoona, he threw a 4-0 shutout of Reading five days after his 20th birthday, or June 29, 1909. He was said to have signed with the Tri-State League club after pitching for Sunbury in the “outlaw” Atlantic League.2 The June 29 game may have been his only decision, though he turns up in another box score or two. The July 24 issue of Sporting Life says that “Musser, the young collegian, has been turned adrift by Altoona because he lacked experience.” The brief note continued, “He has a nice assortment of pitching goods.” Musser retained his interest in pitching and those goods were noted by others; a year later, he was on the team in York, Pennsylvania – at least briefly. The July 9, 1910, Sporting Life reported that he’d been secured from Indianapolis and had pitched an inning in a game for York, taken out after the one inning, but that “club officials believe he has the goods and will retain him.” A note earlier in the year had him with Williamsport again, at least for a while, and mentioned a short trial with Wilkes-Barre in 1909 (though it’s possible the writer was referring to Altoona and mixed up his cities.) To add to the confusion, Musser pitched for Altoona against Harrisburg on July 3, 1910. Suffice it to say, he was known within the Tri-State League but not yet making a mark with any one team.

In 1911 Musser he found steady work. He pitched for Canton in the Class D Ohio-Pennsylvania League and won 15 games, matched by 15 losses. (He also pitched in one tie game.) This attracted the interest of the Washington Senators; on September 1 they drafted Musser. He joined Clark Griffith’s Senators in Charlottesville for spring training in 1912 but as late as March 20 he was seen as “far from form” by the Washington Post’s Joe S. Jackson. Musser’s debut start of the spring came against Cornell University on April 6; he gave up just two hits and no runs in five innings of work. But he otherwise had very little opportunity to pitch. Nonetheless, he made the ballclub.

Carried for the first six weeks of the season without an appearance, Musser “can be beaten no worse than some of the veterans have been,” opined the Post’s Jackson.3 Musser was finally given a start, in Chicago on June 6, and held the White Sox scoreless through five innings while Washington built a 2-0 lead. When he loaded the bases with nobody out in the top of the sixth, Walter Johnson came on in relief and only one run scored. The final score was 9-1 and under today’s scoring rules, Musser would have been given the win. He’d allowed only two hits and walked three, and Griffith was undoubtedly pleased with the showing. He pitched again on June 9 and let in one run in both the first and second innings before being replaced. The Senators came from behind and won, 4-3. Musser pitched into September for the Senators but only sporadically, getting into seven games for a total of 20⅔ innings. He had no decisions, but a 2.61 earned-run average. On September 21, he was released to the Los Angeles Angels of the Pacific Coast League under option.

Musser was 2-1 in seven games for the Angels. The Coast League ran later in the season, and one of his wins came on October 18 when he beat the visiting Portland Beavers, 2-1, his own seventh-inning triple leading to the first of the Angels’ two runs. He remained under contract to the Senators and pitched, again under option, for both Des Moines and Atlanta in 1913.

Musser joined the Senators for spring training again in 1914, the first to report. We don’t have adequate historical club statistics to consider, but he pitched well enough that the Washington Post observed of his 1913 campaign, “He was successful with both teams, so much, in fact, that he was considered the leading pitcher in the Western circuit.”4 We do know he struck out 150 batters in 23 games, while allowing only 136 hits.5 He was back with Los Angeles in 1914. His first outing was about as wild as can be; he walked six batters in 1⅓ innings and every one of them scored. In his next outing, he shut out Portland, 2-0. It was an up-and-down season, 7-10 in 22 games.

Come 1915, Angels management returned Musser to Washington, from which he was optioned again to Des Moines. One wonders about what antics he may have engaged in; the Los Angeles Times said, “Lack of control was Paul’s main drawback, together with his ‘Rube’ Waddell actions.”6

In any event, 1915 in Des Moines proved to be a thoroughly gratifying season. Musser was 20-2, with the best won-lost percentage in the league but a bit behind George Mogridge (24-11) and Claude Thomas (22-13) in wins. Unsurprisingly, with three 20-game winners, the Frank Isbell-managed Des Moines Boosters won first place in the Western League. In 1916 Musser increased his number of wins by two (22-14), and led the league in strikeouts with 249 in 330 innings, pitching in 47 of the club’s 150 games. Des Moines finished 75-75, in fifth place, and in 1917, under new manager Jack Coffey, they finished first again and won the newly-instituted playoffs as well. Musser bore an even heavier load that season, 346 innings. He led the league again in strikeouts with 337, and added another win, going 23-18.

On August 30 the Chicago White Sox purchased Musser’s contract, to report in the spring of 1918. The White Sox won the World Series in 1917 and were counting on Musser to help them remain a championship team. He joined the team for spring training, the entire team being fortunate to escape without injury from a very serious train wreck in Texas on March 18. A month later, on April 18, Musser was released to Minneapolis. Again, the historical record leaves us uncertain as to all the transactions that occurred; he pitched in 15 games for Des Moines (6-7) but with the World War on, he also spent a portion of both 1918 and 1919 serving in the Army Medical Corps.

On July 16, 1919, Des Moines sold Musser’s contract again, this time to the Boston Red Sox. His first appearance was a complete game, a hard-luck 2-1 loss to the Tigers in Detroit on July 22. He started again on the 26th against the New York Yankees, but it was a rainy day and he was taken out early because one of his primary pitches, the not-yet-outlawed spitball, wouldn’t work well in wet conditions. On July 29. after giving up eight runs (only one of them earned, thanks to four Red Sox errors) to Detroit in a game at Boston, he took his second loss. (The winning pitcher in both Detroit games was Dutch Leonard, a longtime Red Sox stalwart who had been traded away the year before.) A brief relief stint on August 12 against the St. Louis Browns was Musser’s last appearance for the Red Sox. He was 0-2 with a 4.12 ERA in 19⅔ innings.

Musser married Helen Ruth Head in May 1929. He worked in 1930 as proprietor of an auto repair shop. The rest of his life is unknown, other than that he had retired from work as a guard at the Rockville Correctional Institution. He was living in Millheim in 1960 and died in State College, Pennsylvania, on July 7, 1973, at the age of 84.

In addition to the sources noted in this biography, the author also accessed Musser’s player file from the National Baseball Hall of Fame, the Encyclopedia of Minor League Baseball, Bill Lee’s The Baseball Necrology, Retrosheet.org, and Baseball-Reference.com.