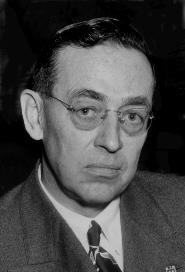 Philip Knight Wrigley owned the Chicago Cubs from 1932 until his death in 1977. During that time, he brought baseball the infamous “college of coaches,” founded the revolutionary All-American Girls Baseball League, maintained Wrigley Field as one of the great stadiums in all of sports, and — to the despair of Cubs’ fans — presided over the bleakest decades in the team’s history.

Wrigley was born in the Plaza Hotel in Chicago on December 5, 1894, to the ambitious businessman William Wrigley Jr., and Ada Foote Wrigley. Philip was their second child and only son. He entered the family business early–at age 20, instead of attending college, he went to Australia to run the new Wrigley plant there. He developed a love for boating and horses as a young man, and, during a four-year enlistment in the United States Naval Reserve, became an accomplished mechanic and a crucial figure in the operations of the Great Lakes Naval Training Center near Chicago. On his discharge in 1921, he held the rank of lieutenant junior grade. In 1918, he married Helen Blanche Atwater, with whom he would have three children: daughters Dorothy and Ada, and son William.

At the elder William Wrigley’s death in 1932, Philip inherited the Wm. Wrigley Jr. Company chewing gum empire; various real properties, including Santa Catalina Island off the coast of southern California; and the Chicago Cubs. Philip Wrigley took his stewardship of the family holdings seriously, with the Cubs holding special sentimental value. “The club and the park stand as memorials to my father,” he said. “I will never dispose of my holdings in the club as long as the chewing gum business remains profitable enough to retain it.” Ownership was one thing; management another. When Wrigley took over the presidency of the team in 1934, one year after the death of longtime team president Bill Veeck Sr., he said: “God knows, I don’t want the job. If I could find another Bill Veeck [senior], I’d put him in there in a minute, but he doesn’t seem to be available. No matter who’s in there, if anything goes wrong, I’m going to get blamed for it, so I might as well take the job myself.”

Wrigley was more businessman than baseball man. He led the Wrigley Co. to success through innovative marketing and relentless quality control, but as Cubs owner and president, he found himself caught in a quandary he never solved. “Baseball is too much of a sport to be a business,” he once remarked, “and too much of a business to be a sport.” Evidence for this tension was abundant over the decades of Wrigley’s ownership. At times, maximizing revenue and minimizing expenses seemed to be his top priority. Commenting on his aggressive marketing campaigns, Wrigley once said: “Our idea in advertising the game, and the fun, and the healthfulness of it, the sunshine and the relaxation, is to get the public to see ball games, win or lose.” Wrigley was selling a product–a day at “beautiful Wrigley Field”–and winning, he thought, wasn’t necessary to sell it.

Accordingly, even the acquisition of players could be more about the bottom line than the won-loss record. On acquiring an injured Dizzy Dean for $185,000 and three players in 1938, Wrigley said: “Even if he can’t pitch well, we’ll get a lot of publicity from him. If he can pitch even a little bit, we’ll get the money back at the box office. And if his arm ever comes back, we’ve got a bargain.” And in 1977, when the old player reserve clause was in its final days and free-agency was about to transform the game, the tight-fisted Wrigley claimed that “[n]o ballplayer is worth more than $100,000, and I’m not sure they’re worth that much.”

At other times, though, Wrigley expressed the exact opposite sentiment. In a 1948 newspaper advertisement (his chosen form of communication with fans), Wrigley staked his claim to a commitment to winning: “The Cub Management wants you to know we appreciate the wonderful support you are giving the ball club. We want to have a winning team that can be up at the top–the kind you deserve. This year’s rebuilding job has been a flop. But we are not content to just go along with an eye to attendance. We want a winner just as you do and will do everything in our power to get one.” And on hiring Leo Durocher to manage the team in 1965, Wrigley said: “Losses at the gate don’t worry me, but losses on the field do, and that’s why we got Durocher. I felt that the team wasn’t putting out.”

Wrigley’s innovations, on their face bold and risky, were always grounded in his business sense. Among them was the creation of the All-American Girls Baseball League in 1943. The league was established to fill the void that would occur if World War II forced Major League Baseball to shut down. Wrigley held tryouts for the league in May 1943 and while skill was necessary, so was ladylike behavior. “Femininity is the keynote of our league,” Wrigley said. “No pants-wearing, tough-talking female softballer will play on any of our four teams.” The league started with teams in Rockford, Racine, Kenosha, and South Bend, and expanded through the Midwest to Minneapolis, Fort Wayne, Grand Rapids, Battle Creek, Kalamazoo, and Springfield. The new league would last 12 years, drawing as many as a million fans in its best season, though Wrigley separated himself from the league in 1944, when it became clear the war was nearing its end.

Wrigley was also an innovator in the area of broadcasting. His father had been one of the early owners to allow his team’s games to be broadcast over radio, and Philip Wrigley followed that legacy by putting his team on television. Both Wrigleys had wanted their team’s games broadcast as widely as was possible, dismissing the argument that broadcasting would reduce attendance. The Cubs’ relationship with WGN-TV began just after World War II, and continued through the station’s growth to “super-station” status, bringing the Cubs into homes across the country.

Wrigley’s most infamous innovation was the “college of coaches”–a group of coaches that would take turns serving as “head coach” in place of a manager. Wrigley announced the arrangement in December 1960. He had signaled its coming the previous year, when he commented, “Managers are expendable. I believe there should be relief managers just like relief pitchers.” The college of coaches lasted officially from 1961 to 1965, though the head coach position was filled by one man, Bob Kennedy, from 1963 through 1965. The fundamental idea was that the coaches would each have the opportunity to impart their expertise on the players, at both the major and minor league levels. Uncertainty became a problem, though. Players didn’t know when the coaching rotation would occur, and different coaches had different rules and different ideas about how to use individual players. The college of coaches experiment was supplemented by the hiring of an “athletic director,” Colonel Robert V. Whitlow, former athletic director at the Air Force Academy, in 1963. Whitlow never found a meaningful role in the organization, though, and resigned after two years.

While occasionally an innovator, Wrigley was slow to react to some changes. In 1935 he proclaimed that night baseball was “[a] fad. Just a passing fad.” (Wrigley did, however, start the process of installing lights in 1941, but the outbreak of World War II halted this, and Wrigley did not renew the project after the war.) The Cubs were also late in establishing a full-fledged minor league system–it was not until the 1940s that the organization did so. And even then, Wrigley’s business instincts got the better of him. He concerned himself more with how much money the farm teams were earning than with the quality of players they were producing for the big league club. In fact, Wrigley allowed the minor league teams to sell their players to other major league teams, if those teams were willing to pay a higher price than the Cubs were willing to pay. It wasn’t until the 1960s that the Cubs farm system produced stars, in the form of Ron Santo, Billy Williams, Don Kessinger, and Ken Holtzman. And, the Cubs were not at the forefront of racial integration. They signed shortstop Gene Baker to a minor league contract in 1950–three years after the Brooklyn Dodgers had brought Jackie Robinson into the league–and didn’t call him up to the major league team until September of 1953, at which time they also brought Ernie Banks to the team.

All the while, Wrigley lavished attention on Wrigley Field, with an eye toward increasing attendance by making a visit to the ballpark enjoyable. Besides maintaining a clean environment, Wrigley removed two of the original eight seats from seat-boxes to increase comfort, and expanded the aisles, again reducing seating in the interest of comfort. Aesthetics were important too. In 1937, he ordered Chinese elm trees planted in the center field bleachers. Those blew down, but the young front-office man assigned to plant the trees, Bill Veeck Jr., decided to plant ivy on the outfield wall instead. Wrigley Field was also the first ballpark with an organ, installed early in the 1941 season.

Wrigley was also known as a fair employer. At Wrigley’s death, former Cubs third baseman Ron Santo told the Chicago Tribune that Wrigley “was always more than fair. If you had a problem, you could go right to him and he would help you out.” This concern for employees was likely a result of Wrigley’s unpretentious manner. The Tribune noted that “[h]e was known as a shy man, who avoided scraps, hated to have his picture taken, and worked in his shirtsleeves. Visitors to his offices in the gleaming white Wrigley Building on North Michigan Avenue sometimes mistook him for a clerk or bookkeeper.”

But Wrigley, who had spent little time at the ballpark as a young man, became more and more reclusive as he aged. Wrigley’s distance from fans was matched by a growing distance from his players. At the time of his death, the Chicago Tribune reported that only one Cubs player–outfielder Jose Cardenal–had actually met Wrigley.

Philip Knight Wrigley died on April 12, 1977, passing his team and chewing gum company to his son, William, who would sell the Cubs to Tribune Company in 1981 to finance his estate tax burden. During Philip Wrigley’s ownership, the Cubs accumulated a won-lost record of 3,405-3,631. They won the National League pennant in 1932, 1935, 1938, and 1945, but never a World Series. In 1966, Wrigley asked facetiously: “They still do play the World Series, don’t they? It’s been so long, I don’t remember.”

As of this writing, Cub fans are still asking that question.

There is one book-length treatment of Philip K. Wrigley’s life: Paul M. Angle, Philip K. Wrigley: A Memoir of a Modest Man (Chicago: Rand McNally, 1975). Angle was a friend of Wrigley’s, and Wrigley and his wife provided source material and interviews for the book. Also, Wrigley reviewed the manuscript. As one might expect, the book provides a mostly positive overview of Wrigley’s life without a great deal of critical interpretation.

Two of the most important sources for the present biography were Jerome Holtzman and George Vass, The Chicago Cubs Encyclopedia (Philadelphia: Temple University Press, 1997), and Doug Myers, Essential Cubs (Chicago: Contemporary Books, 1999). Holtzman and Vass’s Baseball, Chicago Style: A Tale of Two Teams, One City (Bonus Books, 2001) was also useful. These sources provided significant information on Wrigley in the context of Cubs history. Further, almost all of the Wrigley quotes in this biography are from these sources.

The Chicago Tribune‘s April 13, 1977, coverage of Wrigley’s death was also a good source of information, including Ron Santo’s reflection upon Wrigley’s death.