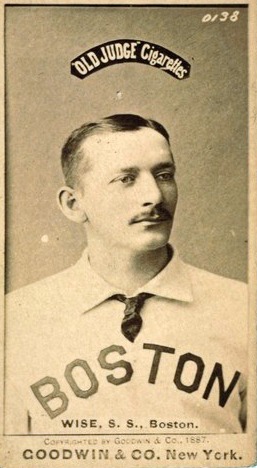 Sam Wise teamed with Jack Burdock to form the double-play combination for the Boston Red Stockings for seven years during the 1880s. An unusual shortstop,i Wise was a Jekyll-and-Hyde player,ii a free swinger (“When Sam Wise offers at a ball and misses it he takes a turn like a prize fighter landing the pivot blow”iii) with power who led the National League in strikeouts in 1884. While far-ranging, he possessed a highly erratic, scattershot throwing arm.iv With his unique combination of skills and deficiencies, managers moved him around the batting order and diamond. Called by future Hall of Famer Buck Ewing “the best short stop in the country,”v Wise for a short period compared favorably with some of the enduring legends of the game.

After a cup of coffee with Detroit in 1881 – he struck out in half his plate appearances and mishandled three of his seven chances – Wise signed first with Cincinnati of the American Association and then with the Boston Nationals. Cincinnati sought, but failed, to obtain an injunction to prevent Wise from breaking his contract, in the first court case in the history of professional baseball.vi

Boston won the National League pennant in 1883 despite Wise’s making a league-leading and career-high 88 errors.vii In one stretch, he first fanned four times against future Hall of Famer Monte Ward and followed up with four errors the next day. With Boston clinging to a small lead and less than ten days to go in the season, Wise made a pair of errors in a one-run loss that caused a reporter to lament, “It is very seldom that the loss of a game can be directly attributed to the poor play of any one player, but yesterday not only the loss of the game but every run scored by Buffalo was a pure gift of Sam Wise.”viii

After Boston responded by pounding Buffalo 18-4 the next day, a reporter for the same paper, perhaps the one who had blamed Wise just one day before, stood up for the embattled shortstop:

The scandalous reports about Sam Wise … are utterly ridiculous. Every one knows that no player in the team is a harder worker and a more earnest fielder than he. Considering the chances he tries for and accepts, it is wonderful that his record is as good as it is. His errors do not arise from any cause but those of over-anxiety, over-confidence and eagerness to make plays. It must be recollected that he is a young player, this year being his second on the diamond as a league fielder…. The many encomiums that his fine play of yesterday received showed beyond a doubt how well his services are appreciated.ix

Wise slumped badly at the plate in 1884. He had a seven-game error streak during which he batted ninth. But Wise rewarded Boston with four strong years. In 1885, he led National League shortstops in chances per game. In one pair of games against Chicago, Wise went 8-for-10 with three doubles, three triples, seven runs scored, and 15 flawless chances.

Despite his superb range at short, Wise played many positions, suggesting that his glove did not completely compensate for his arm. He played predominantly at first base in 1886 because of an arm injury, and reached new highs in batting and slugging while doing so, suggesting that a lesser defensive role freed him to focus on his hitting.

Healed and back at shortstop,x Wise shattered these marks in 1887, his career year, when he finally seemed to put together the offensive and defensive parts of his game and reporters likened him to future Hall of Famers. “Sam Wise has played short stop this season equal to the best work ever done by George Wright; his left-hand stops have been something wonderful.”xi

A Boston Herald correspondent “sent in as his choice of the three best batsmen – Sam Wise, Cap Anson, and Dan Brouthers.” While Anson and Brouthers outhit Wise by more than 50 points over the course of his career, they barely outpaced him in 1887, when Wise went 6-for-6 in one game, and finished fourth in slugging and fifth in batting. In one 15-game stretch, he hit .507 and slugged .971. After the season ended, the Boston Globe presented Wise with a silver bat to honor him, rather than the much more famous King Kelly, as Boston’s best hitter.

After a tumultuous offseason that featured dissatisfaction with his contractxii and rumors of a trade of middle infielders with Chicago for Fred Pfeffer,xiii Wise had a more typical up-and-down season in 1888, his Boston swan song. One game typified his campaign and his career:

Samuel W. Wise, the prince of short stops, played an unenviable role in the exhibition at the South End grounds yesterday afternoon, and is responsible in a large measure for Boston’s defeat. Aside from a fatal and inexcusable muff of an easy fly in the eleventh inning, his playing was “bang-up” and several times elicited the heartfelt applause of the large concourse of spectators.xiv

Wise again led shortstops in chances per game and batted throughout the lineup. He tried batting right-handed in both the leadoff and cleanup positions, but struck out both times. Over one 21-game period, Wise scored only three runs while making 14 errors, at least three of which, including the one mentioned above, led directly to losses. During his last two weeks in Boston, he fanned three times on nine pitches against former teammate Charley Buffinton; Wise also smashed three triples and fielded 11 chances without mishap during a doubleheader. He could see that his Boston tenure would soon end: “Sam Wise feels all broken up. He loves to play, but the management can’t see where he would strengthen the team. Sam would like to get his release. He says he has played in one town about long enough.”xv

Wise got his release, which made front-page news.xvi In his remaining major-league seasons, Wise alternated weak years with strong ones. After a mediocre year in Washington in 1889,xvii he jumped to Buffalo in the Players League and drove in 102 runs. Connie Mack played with Wise in Buffalo. When Mack’s Athletics won the World Series in 1929, Wise’s widow wrote Mack, who replied in part, “What a great player Sam was. He could field and throw. I have never forgotten him as so many things came up while we were together at Buffalo that have always kept him in my mind.”xviii

After a middling season with Baltimore of the American Association in 1891, Wise went to the minors for a year before returning to Washington in 1893. Now 36, he made a surprising comeback. He again led the National League in chances per game and hit .311, setting or tying career highs in hits, doubles, and triples.

Whether for athletic or business reasons,xix Wise, despite his strong 1893 performance, spent the rest of his playing days in the minors, where he hit over .300 in five of six seasons.

Sam Wise died in Akron “from a prolonged attack of appendicitis. Wise was 52 years old at the time of his death.”xx

His name lives on the list of triples leaders for the Braves franchise. In 2012 Wise remained tied for eighth with 71 triples, four slots down from his former teammate John Morrill, who went with him from Boston to Washington in 1889.

i Larger than most shortstops of his era, “Sam Wise weighs over 200 pounds,” according to one contemporary newspaper note. “Gossipy Gleanings,” Boston Globe, April 3, 1885, 2. Another article a few years later also highlighted his size: “Wise is a man of large physique and possesses great strength. He weighs 190 pounds. …” “Returns All In,” Boston Globe, October 9, 1887, 4.

ii Like many players, Wise drank. One wonders whether alcohol played a role in his inconsistent career. In an interview, Wise “admitted that I had taken a glass of beer now and then, but was always in fit condition to play ball. …” “Sam Wise Indignant,” Boston Globe, October 25, 1888, 5. In his history of the Boston Nationals for the Putnam series, longtime Boston sportswriter Harold Kaese refers to Wise as “jittery,” an attribute that could easily apply to his fielding alone but may also have referred to his demeanor as well. Harold Kaese, The Boston Braves (Boston: Northeastern University Press, 2004), 33.

vi “The St. Louis Globe-Democrat says: The Cincinnati club some time ago signed Sam Wise of the Akrons to play with them in 1882. The Cincinnatians were jubilant at the idea of securing his services, and Wise, too, seemed happy until Saturday last, when he received two telegrams. One of them was from the manager of the Boston club, and the other from Harry Wright, now managing the Providence team. They offered Wise a big salary to play third base for them. As the offer of the Bostonian was most liberal, Sam accepted it, and is now packing his gripsack preparatory to a pilgrimage to the Hub. He will pay no attention whatever to the contract he made with Cincinnati. The Cincinnati club has decided that Wise’s contract with them will stand law and will enjoin him from playing.” “Sam Wise Deserts Cincinnati for Boston,” Boston Globe, January 22, 1882, 8.

vii Even a few years later, a reporter felt moved to comment, “Nine innings were played yesterday without Sam Wise getting in his error.” “Around the Bases,” Boston Globe, August 13, 1885, 2.

xii Wise more than once expressed dissatisfaction with his compensation: “From the first Wise has made more or less of a kick each season asking for more money, until the directors concluded to make a change.” “Morrill and Wise Gone,” Boston Globe, April 6, 1889, 4.

xvii He began the season “very lame with Charley Horse.” “Around the Bases,” Boston Globe, April 6, 1889, 4. After a position switch and warmer weather, he revived: “Sam Wise seems to have found his proper place now. He is covering second in hallelujah style.” “Base Ball Notes,” Boston Globe, July 18, 1889, 5.

xix “Wise is in the hotel business in Akron, Ohio, and may not play with Washington this year.” “Baseball Brevities,” New York Times, February 8, 1894.