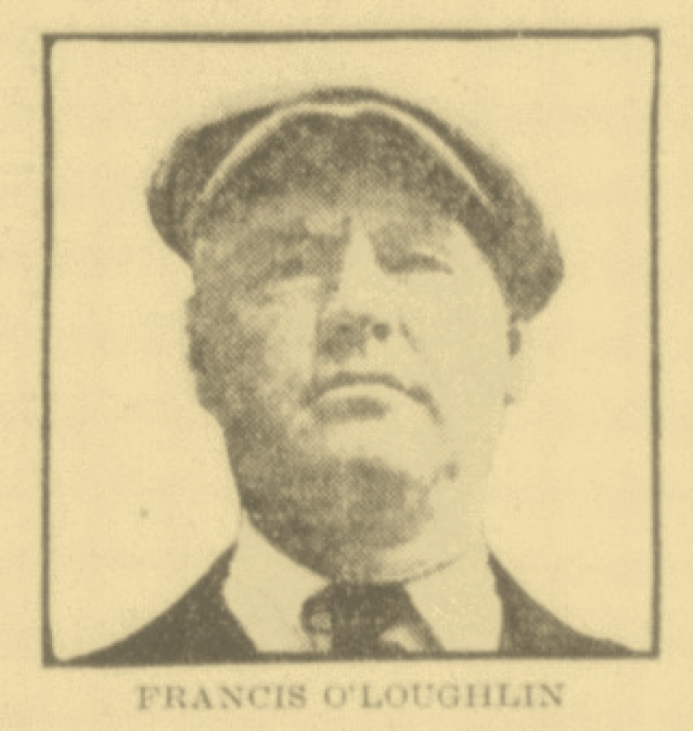 Many of the umpires of the Dead Ball Era made their mark with style and personality, and Frank “Silk” O’Loughlin was among the most stylish and quotable in a crowded field of colorful characters. O’Loughlin was born in 1875 in Rochester, New York, and spent a good part of his youth playing amateur baseball in the Rochester area.

Little has been written about his playing abilities. That may indicate O’Loughlin lacked the physical talent to make playing the game a career, but he brought other assets to the diamond. Writings about his early life indicate O’Loughlin enjoyed a reputation for possessing good judgment and being fair and impartial, qualities that would serve him well during his umpiring career.

O’Loughlin began officiating in an exhibition game between Rochester and a semi-pro team from Palmyra in 1895. The rivalry between the teams was heated, and finding a competent umpire was very important. O’Loughlin was nominated by an admirer and accepted the position. Following the series of games, both teams praised O’Loughlin’s efforts. It was then “Silk” decided to pursue a baseball career as an arbiter, not a player. During the rest of 1895 and 1896 O’Loughlin umpired amateur and semi-pro baseball to, as he said, “get the necessary experience,” to make it a full time job.

His curious nickname “Silk” was a moniker hung on him at an early age and referred to his head of hair and not his stentorian speaking voice. O’Loughlin told a newspaper reporter from the Rochester Evening Telegram how he got the name: “when I was a little duffer about five years of age my folks thought I was getting too old to wear the long silken curls that then hung artistically over my shoulders, so a relative snipped them off. Somebody called me ‘Silk’ and the name stuck. Now it is seldom any one calls me Frank.” Other accounts say the curls were shorn by an aunt who did not like long hair on young boys, and the hair cut angered some in the family, except his brother who teased, “Ta ta to the silken locks.”

As an umpire he was known for a loud and clear voice. O’Loughlin used his voice to communicate his calls and believed it was an important part of what he brought to the game. Accounts of games officiated by “Silk” often included references to his “Strike Tuh” call. A call that let everyone know the hitter had two strikes on him. O’Loughlin often told those who asked that he wanted everyone to hear him and “the patrons of the game like to hear an umpire. I think, too, that it enlivens the game to have the decisions given in a sharp, brisk way.” Some observers credit him for developing arm signals as a means of communicating calls, but whether O’Loughlin actually can be credited is as best uncertain.

What is certain is O’Loughlin was also known as a sharp dresser, introducing creased trousers to his uniform. The crease was so sharp some players jokingly feared that getting too close would get them cut. Silk also was fond of a diamond ring that he wore on his right hand. He would sometimes refer to calling a base runner out by saying that he flashed the runner some cracked ice. Many players bitterly claimed O’Loughlin would call them out just so he could flash the ring.

While O’Loughlin may have cut a fine figure on the field, he was also superstitious, wearing a blue flannel shirt that dated back to his minor league days. He said he was wearing the ‘lucky’ shirt back in 1898. During a game at Cortland in the New York League O’Loughlin incurred the wrath of fans who after the game grabbed the ump and tossed him into a nearby river. The crowd wanted a confession, but O’Loughlin held his ground saying the runner was out and the mob held their ground by holding Silk’s head under water. Wearing nothing but the shirt, O’Loughlin escaped with the help of a sympathetic farmer.

His professional umpiring career began in 1897 when Ed Barrow, then President of the Atlantic League tapped him. O’Loughlin worked in that league for most of the year and in the late season jumped to the New York State League in order to stay close to home. Silk’s talents were used by the Eastern League from 1898 through 1901. Late that year American League President Ban Johnson came calling and “Silk” O’Loughlin joined the new league, serving as one of its finest umpires for 17 seasons from 1902 through the war-shortened 1918 season.

Among one of Johnson’s early hires, O’Loughlin repaid the American League chief for backing umpires with his loyalty and support. Johnson had simple orders for his umpires: 1. Make the game on the field clean. 2. Rule benevolently when possible. 3. Rule with an iron hand if required. 4. Johnson would back his umpires in disputes.

That did not mean that O’Loughlin had no trouble with Johnson. During the 1908 season Johnson was critical of a call Silk made in a Detroit-Chicago game on an attempted squeeze play. Johnson chided O’Loughlin for failing to differentiate between a pitch and a throw and calling a Chicago runner out.

Silk was also known for his concern over the time of games and often suggested means to speed up play. O’Loughlin was known as a no-nonsense man on the field and was one of Johnson’s umpires who could be called the tough cop on the beat. O’Loughlin said Ban Johnson helped make baseball a respectable profession by “eliminating rowdyism by giving his staff of umpires his unqualified support.”

Silk was also a strong supporter of a two-umpire system in the majors. It must be noted that the call in that Detroit-Chicago game was made by O’Loughlin as a solo umpire, and a partner might have been able to determine if the pitcher’s foot was on the rubber when the play was made.

O’Loughlin had many claims to fame as an umpire. He was behind the plate for seven no-hitters, record unlikely to be equaled. He was also the first ump to eject Ty Cobb from a game. That occurred on May 2, 1908, in a game with the White Sox when Cobb tried to stretch a triple into an inside-the-park homer.

As an umpire, his self-confidence and arrogance would often rankle others who were critical of his attitude. O’Loughlin claimed there was no such thing as a close call saying, “A man is always out or safe, or it is a ball or a strike. The umpire, if he is a good man and knows his business is always right. I am always right.” Silk was also known for saying, “The holy prophets for religion and O’Loughlin for baseball, both infallible.”

Unfortunately, O’Loughlin did not enjoy a full career. He would die at the age of 42 in Boston on December 20, 1918, due to complications from influenza, a disease that claimed the lives of hundreds of thousands of people in the days following World War I. His personality, enthusiasm and energy made its mark on the American League. On O’Loughlin’s death, Hall of Fame umpire Billy Evans noted Silk was a great partner who worked every game like it was his last saying, “Silk was a bundle of nerves. From the start of the game until the finish he was on edge. Baseball was a serious proposition for him.”

The biography was prepared using materials from the author’s More than Merkle, information drawn from the Hall of Fame documents and other information that came to the author.