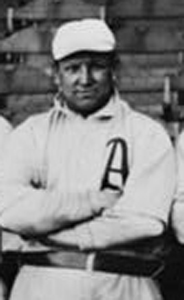 At 30 years of age and the last man signed by Connie Mack for his newly organized 1901 Philadelphia team, Ralph “Socks” Seybold proved to be a durable and valuable player during the Athletics’ first seven seasons, becoming one of the junior circuit’s top sluggers. In spite of being somewhat maligned by the Philadelphia press for his rotund figure and voracious appetite, Seybold at 5’11” and somewhere around 200 pounds was a popular figure with the fans and his teammates. When he signed Seybold, Mack was unsure of his age and weight (he never did know either for sure). But Mack could see what the average fan or writer could not. He knew Seybold had deceptive quickness and speed for his size, could hit behind a runner on first, and knew how to study pitchers and batters and position himself in the outfield accordingly. “Socks was so big the fans never credited him with all the good points that he showed to me in his daily work,” Mack said. Though it was commonly used during his playing career, the origin of Seybold’s colorful nickname remains a mystery.

Ralph Orlando Seybold was born in the eastern Ohio town of Washingtonville on November 23, 1870, the second of four children of Christian and Augusta Wiggin Seybold. The family moved to Jeannette, Pennsylvania, a glass manufacturing town in the southwestern part of the state in 1889 where Christian set up shop in the hardware, tin and slate roofing business. Playing for the Jeannette Greys in 1891, Ralph won “glory and applause for his beautiful catches in left field.” In 1892 Seybold made his professional debut with Altoona of the Pennsylvania State League, batting .280; the next year he played with Johnstown in the same league. In 1894 he moved to the Franklin, Pennsylvania independent club. In 1896 and 1897 Seybold played for Lancaster, Pennsylvania, staying with the team as it transferred from the Pennsylvania State League to the Atlantic League. After Lancaster won the pennant in 1897, Ralph was drafted by Richmond of the Atlantic League. He played for the Richmond Bluebirds in 1898 and 1899. On August 4, 1899, with Seybold leading the Atlantic League in home runs for the third consecutive season, his contract was purchased by the Cincinnati Reds.

Riding the bench for six weeks, he grew rusty and fat, gaining about 20 pounds. So when he finally made his major league debut on August 20, 1899, he was out of shape. Appearing in 22 games he batted only .224. Cincinnati owner John T. Brush also owned the Indianapolis Hoosiers of the American League, then in its final year as a minor league, and in 1900 Seybold was demoted to Indianapolis. Despite a mid-season ankle injury, Seybold played right and center field and occasionally at first base, batting .304. Reporting that Ralph might spend the winter in California with his brother, The Sporting News wrote, “Big Ralph is a prize that several clubs covet. A splendid fielder, a great batter and the fastest man his size in the league.”

Socks’s size always overshadowed his accomplishments on the field. When he arrived in Philadelphia on April 2, 1901, the Philadelphia Record reported, “Seybold shows points of a player. On arrival at the Hanover, before looking up Connie Mack or even bothering as to what became of his grip, he made for the dining room as though it was the first base bag.” But he sometimes used his size to his financial benefit, wagering unsuspecting teammates and opponents that he could beat them in a foot race–and doing it.

Mack’s 1901 opening day lineup had Seybold in left field, although right field was the position he would play most often during his career with the Athletics. With the early season failure of Charlie Carr at first base, Mack moved Seybold from the outfield to first where he stayed through the middle of May. When Mack signed Harry Davis to play first base, Seybold was back in right field to stay. Seybold liked to play the position with a first baseman’s mitt. He was able to do so only after receiving special permission from league president Ban Johnson.

The power of the 1901 team consisted mainly of Nap Lajoie, Seybold, Lave Cross and Harry Davis. Batting behind Lajoie, Seybold finished the year with a .334 batting average, 90 RBI and eight home runs, all figures ranking among the league leaders. From July 19 until August 14, Ralph hit safely in 27 consecutive games.

Despite the loss of Lajoie, the Athletics won the 1902 pennant by five games, with Seybold keying an offensive attack that led the league in runs scored. For the second year in a row, Ralph hit over .300, finishing with a .316 batting average. His 97 RBI were the second highest on the team and his 16 home runs set the American League record that stood until Babe Ruth hit 29 in 1919.

In 1903, the Athletics fell to second place behind Boston. Now 32, Socks led the major leagues in doubles with 45. His .299 batting average and 84 RBI were second on the team. Injuries plagued the 1904 Athletics as they fell to the second division, even though they still finished 11 games above .500. Socks again played the majority of the games in right field, subbing for Harry Davis at first base 13 times. His .292 batting average was third highest on the team, but he hit only 3 home runs and his RBI total slipped to 64. The apparent drop in production, however, was an illusion of context; offense was down throughout the American League.

The 1905 Athletics won Mack’s second pennant, finishing two games ahead of the White Sox and leading the league in runs scored, doubles, slugging average, pitching strikeouts and shutouts. Socks played right field finishing with an .983 fielding average, his highest ever. His batting average slipped to .274, his lowest ever in a full season up to that point. Again, however, it was an illusion of context; Seybold’s offensive production actually improved. Like the rest of his teammates, Seybold was stymied at the plate in that year’s World Series, collecting only two singles in 16 at-bats in Philadelphia’s five game defeat at the hands of Christy Mathewson and the New York Giants.

Socks improved for the 1906 season. He batted .316, hit 23 doubles, collected 59 RBI and slammed five home runs. He played in 116 games, his fewest since 1901, all but two in right field. 1907 turned out to be the last season for Seybold as an everyday player. He played in a career high 147 games, batting .271, his lowest full-season average. But he was still among the leading power hitters in the league, as his five home runs and 92 RBI both ranked second in the league. After the the season Socks married Georgia-born Wilhelmina “Minnie” Heitz. They made their home in Jeannette until she died on March 28, 1917 of pleural pneumonia. They had no children.

While preparing for the 1908 season, Socks suffered a broken leg. The Philadelphia Record reported on April 7, 1908 that Socks would not play at the start of the season. Even when able, his playing time was limited, for Connie Mack had begun rebuilding with young players. Toward the end of the season, in which Seybold batted just .215 with only two extra base hits in 130 at-bats, Mack sent Socks to Greenville, South Carolina, to collect the young outfielder Joe Jackson, who had been recently purchased by the club but had a hard time adjusting to the big city and kept returning to his hometown. Socks found Jackson and convinced him to return to Philadelphia. On the train Seybold bought Jackson his dinner, spent the evening with him and made sure he was in his berth and then settled in for the trip north. When Socks went to check on his companion in the morning he was gone. Jackson had gotten off the train in the middle of the night and headed back to Greenville. Socks went back for him again.

Realizing his playing days were behind him, Socks took an opportunity to coach and play for the Toledo Mud Hens in 1909, taking over the managerial role towards the end of the season. The following year Socks was back home in Jeannette, where he coached several industrial league teams in the area usually known as the “Seybolds.” In 1912 at age 41 he played for the Richmond Rebels in the newly-formed United States League, but the league folded by the end of June that year.

For several years thereafter, Seybold worked as the steward for the local aerie of the Fraternal Order of Eagles. Just after midnight on December 21, 1921, Socks and four of his friends left town for his brother’s farm in the foothills of the Allegheny Mountains. Traveling east on the Lincoln Highway past Greensburg, Pennsylvania, Socks tried to take a sharp curve at a high rate of speed and was unable to control the automobile. It plunged over an embankment, turning over four times before it stopped. When the others came to, they thought Ralph was still unconscious and waited for a passing motorist for help. After getting him to the hospital it was determined that he had died of a broken neck. Leaving behind an estate valued at $20,000, he was laid to rest on December 24, 1921, next to his wife at the Brush Creek Cemetery near Irwin, Pennsylvania.