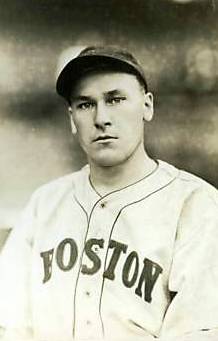 Left-handed pitcher Spike Merena had a rather brief baseball career – four games in the big leagues and 77 games in all. His major-league career began with the Boston Red Sox on September 16, 1934, and ended exactly two weeks later, on the last day of the month.

John Joseph Merena had grown up in Bridgeport, Connecticut, though he’d been born in Paterson, New Jersey, on November 18, 1909. His father, Jacob Kosmo Merena, had come from Nove Sonch (Nowy Sacz), Poland (it was Russia at the time), arriving in the United States in 1901. He was naturalized in 1924. Jacob’s wife Mary was a New York native, born to two Russian parents. They had three children, John being the eldest, and then Anna and Helen. In 1918 Jacob Merena was working as a driver for the Crane Company of Bridgeport. In 1930 he was employed as a laborer for a valve company. John was 20 and worked as a helper at a drug company. John considered himself of Russian ancestry. He attended Barnum Elementary School in Bridgeport, but did not go to high school or college. He graduated from the Booth & Bayless Secretaril School with a degree in bookkeeping.i

He came to professional baseball from a semipro background, though reports of where he had played are hard to verify. Respected Hartford Courant sportswriter Albert W. Keane said that he’d pitched for Canton (Ohio) in 1931 and for the Bridgeport Bears in 1932 until the Eastern League disbanded.ii Connie Mack of the Philadelphia Athletics was said to intend to bring Merena to spring training in the spring of 1933. He was added to the Athletics’ roster. At first he was thought to have a chance to make the team, but perhaps a game he pitched for the Fort Myers Stars against the Athletics on March 28 upset the plans: Philadelphia won, 16-1. He and the man who relieved him allowed 14 hits – and saw Fort Myers commit ten errors. He’d been signed by the Jersey City Skeeters, but before he pitched in a game for the Skeeters he was traded to the Richmond Colts (Piedmont League, Class B) for outfielder Carr Smith. Smith had been ticketed for Harrisburg, swapped for another player, but balked and was sent to Richmond instead and that brough Merena into play.iii

In his first full season of pro ball, 1933, Merena pitched for Richmond and posted a record of 16-10. We don’t know his earned run average, but he did have a WHIP (walks and hits per inning pitched) of 1.268. As a batter, he hit .225. Jersey City still had a string on him until February 1934 when the Skeeters traded him and pitcher James McCloskey to the Boston Red Sox for Dale Alexander. He was considered a Red Sox prospect during the springtime in Sarasota, but none of the rookies had much of a chance to crack the starting rotation. On April 10, Merena and McCloskey were both sent to finish the exhibition season training with the Syracuse Chiefs.

Merena pitched in Double A for the International League Chiefs, which entered into a working agreement with Red Sox GM Eddie Collins that made the Chiefs the leading Red Sox farm club at the time. Merena was 7-10, but had an ERA that was far from good – averaging 6.77 runs per nine inning game. Veteran Boston Post sportwriter Paul Shannon wrote that Merena was slated to start for the Red Sox in 1935, saying that “Merena, a right-hander, has done wonderfully well with Reading and is said to be qualified as a major league entrant right now.”iv Merena was a left-hander, had been with the Reading Red Sox only briefly during the course of the season (throwing 17 innings at Class A, with a 1-1 record), and if he was qualified to pitch in the majors, it’s not altogether clear how those qualifications had been earned.

In fact, he did do quite well. Merena was called up to the major leagues and joined the Red Sox on the road on September 10, 1934, in Detroit. His first appearance came in the second game of the September 16 doubleheader against the White Sox at Comiskey Park as the fourth of five Red Sox pitchers in a 12-10 loss. Merena faced two batters, walked one and gave up a hit to the other but saw one of them retired for an out and so was credited with a third of an inning of work.

In St. Louis on September 20, Merena pitched a very good game, tied with the Browns 1-1 through seven innings. In the bottom of the eighth, St. Louis scored a run to take the lead, but Boston scored two in the top of the ninth. Merena got one out in the ninth, but then gave up a walk and a two-run homer to the roof of the pavilion which cost him the game, 4-3.

His next stop was Yankee Stadium, on September 24. Facing the Yankees, his newly developed curveball was working well (he’d previously thrown in more of a sidearm motion, but had worked over the summer at more of a straight delivery) and he shut New York out 5-0 on four scattered hits – and in the process eliminated the Yankees from the pennant race. The New York loss guaranteed that the Detroit Tigers won the American League pennant. Lou Gehrig had two of the four Yankees hits. It was the last home game of Babe Ruth’s career as a Yankee; he had a base on balls in his only plate appearance. There were only about 3,000 fans in attendance for the Babe’s last game, given the foregone conclusion that it was only a matter of time before the Yankees were eliminated from contention.

In the second game of the September 30 doubleheader against the visiting Philadelphia Athletics, Merena pitched before the Fenway Park faithful. Riding a 2-1 lead into the seventh inning, he was victimized by the home run again, a three-run drive by Mike Higgins over the left-field wall.

Merena finished his two weeks with the Red Sox with a record of 1-2, but with a good 2.92 earned run average. He’d pitched two complete games, one a shutout. His two losses were 4-3 and 4-2. He’d been touched for two costly homers, and he’d walked 16 while only striking out seven. The Boston Globe had already said that if he could maintain the level of work he had in his debut, he would be an invaluable prospect.v

The Red Sox had a surfeit of southpaws – with Lefty Grove, Rube Walberg, Fritz Ostermueller, George Hockette, and Merena. In the spring of 1935, the 5-foot-11, 175-pound Merena trained with the Red Sox, but was placed with the Syracuse Chiefs again. He didn’t pitch much at all. He only appeared in eight games and was 1-3, reportedly injuring is pitching arm and being released.

Merena hadn’t give up hope of a pitching career and paid his own way to the Detroit Tigers’ training camp in the spring of 1936, hoping to hook on with a team which lacked any left-handers at all, but was unable to do so and given his unconditional release.

After his baseball career ended, Merena joined the Bridgeport, Connecticut, police department and worked until his retirement in 1976, living with his wife Ann. They had married in November 1939. The couple had at least one child, J. Daniel Merena, who also worked for the Bridgeport Police Department.

After 32 years working as a foot patrolman and in a radio car for the Bridgeport Police Department from 1944 until July 1976, John Merena retired. He died in Bridgeport less than a year later on March 8, 1977. He was 67 at the time.

In addition to the sources noted in this biography, the author also accessed Merena’s player file from the National Baseball Hall of Fame, the Encyclopedia of Minor League Baseball, Retrosheet.org, and Baseball-Reference.com.