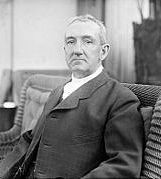 Cultivating a genuine love for baseball while growing up in Dubuque, Iowa, Stanley Robison eventually came to own the National League St. Louis Cardinals. In 1906 he purchased the team from his business partner and older brother, Frank De Hass Robison, with whom he had co-owned an early Cleveland club. Unlike his demonstrative brother, lifelong bachelor Stanley was soft spoken and introverted, preferring to remain out of the public eye. But as with Frank, his efforts to bring a pennant to St. Louis never reached fruition. Still working toward that end after only five years at the helm, he died just prior to the season of 1911. When the contents of his will were made known, the entire baseball world took notice. Everything he owned fell into the hands of his sister-in-law and niece. That made Frank’s daughter Helene the Cardinals’ majority owner, and the first woman to own a major league baseball team.

Because he is the lesser known of the two Robison brothers who owned the Cardinals, Stanley’s biographical details have been obscured and sometimes misstated. Although several sources give his birthplace as Iowa, an 1870 US census along with other records reveal that he was born in Pittsburgh, Pennsylvania, on March 30, 1854. He was named for his father, Martin Stanford Robison. Probably to avoid confusion, his father was known as M.S. Robison. M.S. Jr. was generally called M. Stanley or simply Stanley. M.S. Robison, his wife, Maria Allison, their children Frank, Stanley, and oldest son John Howard moved from Pennsylvania to Dubuque, Iowa, late in the 1850s. There, the youngest child, Ellsworth, was born. That Midwestern city hosted a number of amateur baseball clubs at the time, exposing the Robison boys to all aspects of the game.

From 1877 to 1880, Stanley studied at Northwestern University in Evanston, Illinois, where he learned civil engineering. He captained his school’s baseball team in a league that included Northwestern, Racine, Chicago, and Wisconsin universities. After graduating, he returned to Dubuque to work at his father’s farm implement business for a short time. But wanting to make full use of his education, he soon moved to Cleveland where his older brother Frank lived. There he joined the successful firm of Hathaway and Robison, Street Railway Contractors and Builders, owned by Frank and Frank’s father-in-law, Charles Hathaway. For a number of years, Stanley lived in Fort Wayne, Indiana, overseeing the company’s business holdings there.

By 1887, the two Robison streetcar magnates had accumulated enough wealth to invest in their primary sports interest. They pooled their resources to acquire a baseball club to play in the American Association. Called either the Forest Citys (Cleveland was known as the Forest City) or the Blues, depending on the source, that team did not blossom until after it joined the National League when Detroit was dropped from its roster in 1889. As NL contenders, the club was dubbed the Spiders, owing to the thin and gangly build of its players. At first the Spiders struggled in the NL, but after scrappy Patsy Tebeau took over as manager two years later, they maintained a first-division standing for nearly a decade. The club’s lineup included the now-legendary names of Jesse Burkett, Bobby Wallace, and Denton True “Cy” Young. Though the Spiders were as quarrelsome as their manager (at one point the entire team got arrested in Louisville over a riot that started when they violently disputed an umpire’s decision), they fared well enough to compete in two Temple Cup series with first place Baltimore, winning in 1895 and losing the following year. Nonetheless, the Cleveland fans failed to support the club to the Robisons’ satisfaction. Thus, in 1899, Frank bought the bankrupt NL St. Louis Browns, and switched its members with the Cleveland players. At first called the Perfectos, that St. Louis team soon became the Cardinals. Frank was president of the St. Louis organization and Stanley became the Spiders’ president. That was the last year of the Cleveland club’s existence.

It would seem that the Robisons meant for the Spiders to fail, as the club ended the season of 1899 with an appalling won-lost record of 20–134. Stanley then took over as the Cardinal organization’s treasurer. By that time, much of the brothers’ street-traction holdings had been sold in a merger, so their attentions were focused on their baseball enterprise.

Although St. Louis ended its first season under Frank Robison’s control at .556, the dawn of the fledgling American League cast a shadow over its future. Some of its best talent defected to the new clubs, including the St. Louis Browns that entered the AL in 1902. When the Cardinals were losing with regularity by mid-season 1900, the Robisons’ longtime manager Patsy Tebeau resigned. Although showing signs of recovery under Patsy Donovan the next year, the club soon resumed its less than mediocre performance. Finally, after several more managerial changes, in a futile effort to salvage the mess, Stanley Robison filled in near the end of the 1905 season. During his brief stint as major league manager, the Cardinals winning percentage was only .380, and the club finished sixth in the eight-team league that year. Early in the following year, crestfallen over his inability to retain the club’s best talent, Frank sold most of his interest in the Cardinals, which by then included the ballpark property, to Stanley. Frank died two years later, leaving Stanley the sole surviving member of the M.S. Robison family.

The first three years of Stanley Robison’s ownership proved miserable for him and for the Cardinals. Managed by John McCloskey, whose previous experience in that capacity included two twelfth-place finishes with the Louisville Colonels in the late nineteenth century, the Cardinals dropped from .347 to .340, ending the season of 1908 at .318. In an endeavor to reverse that trend, the younger Robison brother went looking for new leadership. Outbidding every club in the league, he snagged the Giants’ star catcher, fiery Roger Bresnahan, the Duke of Tralee, to serve as his club’s player/manager.

According to Fred Lieb, in his book The St. Louis Cardinals, in order to conceal from the media his ambition to sign the Duke, in 1908 Robison agreed to a clandestine meeting with Bresnahan to discuss his conditions. Bresnahan wanted a $10,000 salary, new players, and “free rein.” The St. Louis magnate agreed to all, and sealed a deal with the Giants ownership that winter. Giving up some of the only bright spots on his club, including promising pitcher Bugs Raymond, for Bresnahan, he looked for his transactions to pay off. And, true to his word, Robison stayed out of Bresnahan’s way, confident that the season of 1909 would be the beginning of a winning era.

With the Duke at the helm, the Cardinals did show some improvement for the next few years, however slight. They inched up from last place to seventh, ending the season of 1910 at .412. Bresnahan did his best to revamp the club, bringing in such talent as rookie pitcher “Hickory Bob” Harmon in 1909 and seasoned second baseman Miller Huggins the following year. By then, the club owner’s health was failing, and the humid weather in St. Louis compounded his discomfort. Problems with his throat and a condition that impeded his ability to walk inspired him to spend the winter of 1910–1911 in Cuba and Panama. Accompanied by his friend and Cardinals club secretary Fred Abercrombie during that journey, he hoped to regain some strength.

When he returned to the United States, Robison made a stop in San Antonio to visit with his brother Frank’s old friend, New York Giants owner John Brush. Then he checked into the Presbyterian Hospital in Chicago, where he was diagnosed with locomotor ataxia, coincidentally, the same ailment Brush had suffered with for some time. From Chicago, he went on to St. Louis to check on his ballclub. While attending the funeral of an acquaintance there, he observed that one never knows about death—someone in this room might expire within a week, he said. While at his ballpark watching the Cardinals practice, he took ill and had to leave early. He then travelled to Cleveland for a visit with Frank’s family, planning to return to St. Louis in time for the March 25 opening game of a pre-season series between the Cardinals and the Browns. He died a day too soon.

M. Stanley Robison spent his last few days in the company of his sister-in-law Sarah and her daughter Helene. A bachelor, he was very close to his brother Frank’s family. At 5:30 A.M. on March 24, 1911, the mild-tempered baseball magnate passed away at Villa Hedges, Frank’s Bratenahl, Ohio, estate. The cause of death was reported as heart failure brought on by blood poisoning. He was laid to rest in the Robison family plot at Cleveland’s historic Lake View Cemetery.

Stanley Robison’s death came as a shock to many, especially his ball club’s players. Cardinal manager Bresnahan could barely hold back the tears when the media questioned him. Pat Tebeau, whose history with Robison baseball dated back to the winning days of the Cleveland club, explained why the players were so fond of their boss. In a St. Louis Post-Dispatch interview, Tebeau said that Stanley “treated his men like friends, not like employees,” adding “I don’t believe he ever had a man who wouldn’t do anything in the world for him.”

St. Louis baseball fans knew little about the Cardinal owner at that time. The antithesis of his attention-seeking brother Frank, he preferred to sit with a few close friends in the last row of the grandstand behind third base at the games. Others in the stands rarely recognized him, as he shunned the spotlight. That made the disclosure of his will all the more surprising. Unlike Frank, who was nearly broke when he died, Stanley was still a fairly wealthy man. Having no children of his own, he left his entire fortune, including his St. Louis ballclub and park, to his female relatives. Twenty-five percent went to his sister-in-law Sarah Robison. Sarah and Frank’s daughter Helene Britton got the rest. Never before had a woman held a position of power in major league baseball, so the media scoffed at the very notion of female leadership. Early newspaper assurances that women would not be running a baseball club and that Sarah and Helene would sell proved inaccurate.

Many of those first reports misidentified Helene Britton as Stanley Robison’s sister. That only reinforces Helene’s later contention that Stanley was more of a brother to her than an uncle. Knowing Helene since her birth, he had helped to foster her knowledge of and appreciation for such then men’s only activities as billiards. And baseball.

Although naturally distraught over her uncle’s death, Helene viewed her inheritance as an honor and a responsibility. She made it clear that she had every intention of taking over as active owner. Married with two children, she hoped to extend the Robison legacy beyond her own reign. That didn’t happen. As owner, she left a slightly better record than her father and her uncle, but she sold six years later when the Cardinals were finally beginning to show real promise. She too is now buried in the Robison family plot in a city that today only knows American League baseball. Her legacy since obscured, she lies at eternal rest near the grave of her dear uncle Stanley, Martin Stanford Robison Jr.

The Encyclopedia of Cleveland History