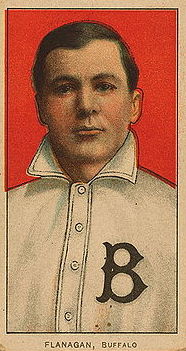 Having played in only seven games for the Pittsburgh Pirates at the tail end of the 1905 season, James Paul “Steamer” Flanagan is about as obscure as a major leaguer can get.

Given that he was a 6-foot-1, 190-pound left-handed batter who hit for power and average and a speedy “fly chaser” (as he was described in newspaper stories); and given that he was well-known among contemporary stars and future Hall of Famers like Hugh Jennings and Ed Walsh, why he didn’t get a better shot at a major-league career is a mystery.

Flanagan was born to Irish immigrants in Kingston, Pennsylvania, a borough in the northeastern part of the state across the Susquehanna River from Wilkes-Barre, on April 20, 1881. Kingston was in anthracite coal country, an area that produced Jennings and Walsh, as well as Bucky Harris, Buck Freeman, and scores more men who reached the major leagues.

Flanagan emerged as a local baseball phenom at Wyoming Seminary, a prestigious secondary and prep school near Wilkes-Barre. Flanagan was 20 when he left Wyoming Seminary in 1901. Family lore has it that he then went to Notre Dame on scholarship.

But according to Cappy Gagnon, SABR’s leading authority on baseball players from Notre Dame, no record of Flanagan’s attending Notre Dame can be found. “I have been on his case for a long time,” Gagnon wrote in an email. “While his family is certain that he went there and they recall stories from him about that, there are no records anywhere at ND of his attendance. I have spoken with our Archives about him and they have nothing. I have also scoured our publications from the time frame and have found nothing, including from our elementary school, which we had through (World War I), in case he attended there.

Gagnon added, “He is one of five people in my research who have claimed ND attendance and had it published somewhere, but all available evidence seems to dispute it. I would dearly love to confirm even one day’s attendance at ND. Back in his day, ND played early-season exhibition games with minor-league teams. I believe some of those teams might have stayed on campus when they played us. I wonder if that might have formed the basis for this rumor.

“Also, back in those days, students came and left at odd times. It’s theoretically possible that he was here for a brief period of time and didn’t get into the records. At least that is my hope. On the list of ND Major Leaguers, I have Steamer listed as a suspect.”

Stories in local papers about Flanagan, including his obituary, add credence to the Notre Dame attendance by indicating that he started his professional career at Springfield, Massachusetts, in 1904. Flanagan graduated from Wyoming Seminary in May 1901, so a 1904 professional start would have given him three years to attend college. But Flanagan actually started his professional career with Meriden in the Connecticut State League in 1902, a year after he graduated from Wyoming Seminary, leaving him a one-year window of time to have attended Notre Dame. If he wasn’t at Notre Dame in 1901, no evidence of where he was can be found.  In any case that 1902 season, when he also played eight games for Toledo and Montgomery, Alabama, was the beginning of a 12-season minor league career for Flanagan.  The National Association ruled that Flanagan could not play in Montgomery, and in 1903 he went back to Meriden.

With this knowledge Bone, his granddaughter, speculates that Flanagan declined the scholarship to sign a professional contract. She is likely right. Bone is one of eight grandchildren from Flanagan’s five children with his wife, Mary Fetherstone of Wilkes-Barre, whom he married In St. Patrick’s Cathedral in New York City. Grandson Ned Barrett was 3 years old when his grandfather died. He said he had only a vague memory of meeting him but strong memories of his mother regaling him with tales of his baseball-playing grandfather and her train trips to see him play in Rochester and New England.

In 1902 Flanagan was joined at Meriden by another Wilkes-Barre area youngster, spitball pitcher and future Hall of Famer Big Ed Walsh, who became a lifelong friend.

Steamer was what is now called a five-tool player. His speed in the outfield and on the bases coupled with his size gave him his nickname. He ran, it was said, like a steam locomotive. He had a strong arm and hit for average and power, such as power was in the Deadball Era. His best home-run season was 5, at Rochester in 1907, but that led the team and was second in the league.

In 1905, when Flanagan was third in batting average (.335) and second in hits for Springfield in the Class B Connecticut State League, the Pirates bought his contract for $1,500. Sporting Life wrote that the Pirates signed Flanagan as insurance against injuries: “Outfielder Flanagan has joined the Pirates in case Leach and Beaumont develop worse injuries than those from which they now suffer.”

The 25-year-old made his debut with the Pirates on September 25 in Pittsburgh, pinch-hitting in the ninth inning against another northeastern Pennsylvania native, the Giants’ Christy Mathewson. The Giants won the game, 10-4.

Flanagan did not play in the next three games, but beginning on September 30 he started in center field, batting third ahead of Honus Wagner, in six of the Pirates’ last nine games, all in Pittsburgh. In his first start he was 2-for-5 with a triple and scored two runs in an 8-3 win over Brooklyn in the first game of a doubleheader. In the second game he was 0-for-4 with a stolen base and a run scored. The game ended in a 2-2 tie, called after eight innings so the Pirates could catch a train.

The Pirates didn’t play on October 1 and 2, then played a doubleheader on October 3 against Boston. Flanagan was 2-for-3 in the first game with a double and three runs scored. In the second game he was 2-for-5 with a run scored. The Pirates swept the doubleheader, 10-3 and 4-3.

His last appearance was as a pinch-hitter in a 2-1 loss to Ed Reulbach and the Chicago Cubs on October 7. Flanagan did not play in the Pirates’ last two games, in Cincinnati on October 8 and 9.

Flanagan finished 1905 and his major-league career 7-for-25 (.280), with one double and one triple. He scored seven runs and stole three bases. Despite that showing, the fact that the Pirates retained him in the postseason draft, and reports in the Wilkes-Barre papers that Flanagan would be signed by the Giants or the Philadelphia Phillies in 1906, Flanagan never played in the major leagues again.

During his years playing for Springfield of the Connecticut State League, Flanagan was the team’s best player and a hero to a youngster who waited for him to arrive at the park every day and carried his bats for him.

That boy, Walter Maranville, became better known as Rabbit. The diminutive (5-foot-5) youngster went on to a 23-season Hall of Fame career as a major-league shortstop. Maranville never forgot the big Pennsylvanian who had been his hero in Springfield. Decades later Maranville visited Flanagan in Wilkes-Barre, where Flanagan lived and worked as a city police officer after his baseball career. The Flanagan family scrapbook contains a signed thank-you card from Maranville.

In 1906 Flanagan batted .289 combined for Springfield and Rochester. His best year was 1907 with Rochester, when he led the team in batting (.305) as well as hits, doubles, home runs, slugging, and total bases.

Back home in Wilkes-Barre in October, Flanagan was selected by Ed Walsh to play for the Wilkes-Barre Professionals in an exhibition game against the Philadelphia Athletics for the benefit of the city’s Mercy Hospital. Major leaguer Buck Freeman played alongside Flanagan in the outfield. The Mercy Hospital game was played annually against a major-league team. In later years Flanagan managed the Wilkes-Barre team in the game.

In December 1906 Flanagan toured Cuba with a team of major and minor leaguers including Detroit center fielder Matty McIntyre. Back home in January 1907 he told the Wilkes-Barre Times of a peculiar feature in games on the island: “If a player doesn’t like a decision he may kick about it for a minute. Then a gong is rung and if the player does not return to his position immediately a patrol wagon is run onto the field and the recalcitrant player is loaded in and taken to the city jail.” He elaborated in an article in Sporting Life: “In one game at Havana I stayed out in the field after the inning had closed, as I did not expect to come to bat in that inning. I went back to the fence and lay down. Suddenly I heard a bell ring and all the boys on our bench ran out to where I was and, seizing me by the arms, they took me to the bench. Do you want to be run in? they asked. It appears that the umpire had waved to me to go in to the bench, but I had not seen it and my minute had expired without me saying a word. If the police arrest so many men that one side has not enough to continue, the entire receipts of the game go to the city for the poor. And they have big crowds there, too. We averaged about 4,000 to a game.”

Flanagan commented that the Cubans knew the game perfectly, pulling off the squeeze play and delayed steals in a finished manner. “They are quick on their feet, and throw the ball with force which is seldom seen here,” he said. “The ball comes in to the home plate on a line, not on a bound, as you see it in this country. The Cuban pitchers, however, are not up to the American standard, and though quick on their feet, the Cubans cannot think quick enough to take advantage of their speed, so that the Americans, though slower on the bases, got better results.”

Flanagan spent most of the rest of his career playing in the Eastern League and the Connecticut State League. His final professional season was in 1913 with Harrisburg of the Tri-State League. He went out with a bang going, 6-for-8 in a doubleheader win over Atlantic City on the last day of the season. After his professional career he lived in Wilkes-Barre and stayed in baseball as an amateur player, manager, umpire, and scout for the Red Sox and Athletics.

Flanagan died at 66 in 1947, leaving two other mysteries besides the question of his attendance or non-attendance at Notre Dame: Why didn’t he get a second shot in the major leagues and whatever happened to that Babe Ruth Ball?

The ball in question was mentioned in a Wilkes-Barre Times article in October 1921: “The Babe Ruth Ball, the one he hit into the right-field stands last Sunday in the fourth game of the 1921 World Series, has been placed on exhibition in Kearney’s Cigar store on Public Square. The ball was given to Steamer Flanagan by his old friend Hughey Jennings assistant manager of the New York Giants. Jennings secured it from the groundskeeper after having Babe Ruth put his autograph on it and presented it to Flanagan. The ball is absolutely the original and has been seen by hundreds of fans.”

The ball, long since lost to the ravages of the deep past, might be worth up to $30,000 had it survived in good condition.

Family scrapbook, provided by Bonnie Bone, granddaughter (Photocopies of clippings do not show the names of the publications)