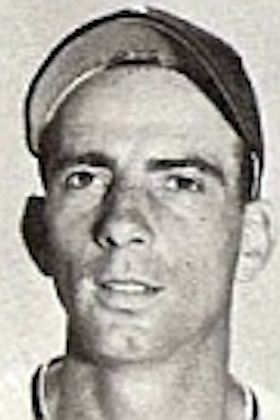 Rolland Edison “Tex” Hoyle was the third youngest of nine brothers in a baseball-playing family. He was born in Carbondale, Pennsylvania, on July 17, 1921, to Alexander S. Hoyle Sr. and Alice (Hazen) Hoyle. His father was of English and Welsh descent and his mother German.

The elder Hoyle was a baseball fan. He played baseball with his sons and the family was frequently almost or wholly its own team in games against other amateur aggregations in and around Carbondale. The members of the team as they joined Dad were Art, Harold (Devil), Donald, Ralph, John, Bob, Rolland (Tex), Charles (Dinkie), and Alex. The family was completed by sisters Margaret, the oldest child, and Audrey. A third daughter, Emily, died at birth.

Five of the brothers became pitchers. Ralph was paid to play with New Jersey teams visiting Northeast Pennsylvania during the 1930s. Bob, a knuckleballer, once pitched a no-hitter against the nearby Mayfield, Pennsylvania, team. Alex pitched professionally from 1948 to 1952, with a one-year absence (1951) for military service during the Korean War, but never made the majors.

Family members said Rolland got his nickname because he walked like the cowboys he saw in the movies and looked like a tall Texan. Tex Hoyle signed with the Butler Yankees of the Class D Pennsylvania State Association in January of 1940. Thomas “Shaky” Kain was his manager. The local fans supported this team; enough donations were raised by May 1940 to buy a new team bus that was painted bright red.1 Hoyle went 8-7 as Butler finished the regular season tied (65-44) with the Johnstown Johnnies, a Brooklyn affiliate, for first place. Johnstown won a one-game tiebreaker, 9-7. In the postseason playoff, following the Shaughnessy format, Butler defeated Oil City, 3 games to 1, in a semifinal series, then swept Beaver Falls, 3 to 0, for the league championship.

Hoyle was back at Butler for the 1941 season, with Shaky Kain again the manager. Hoyle pitched in only nine games and was 1-3. Butler finished second behind Johnstown again, and again won the playoff championship, beating Washington (Pennsylvania) 3 games to 1.

On March 14, 1942, Hoyle was assigned outright to the Joplin Miners of the Class C Western Association though his status at this time was listed as a free agent. There appears to be no record of Hoyle playing with Joplin. In early July, it was reported that he had been suffering from arm trouble but was now back with Butler.2 Pennsylvania State Association statistics as of July 12, 1942, list Hoyle with 6 wins and 2 losses and 60 strikeouts against 23 walks. On July 21 he signed a new contract with the Yankees organization. On August 11 the paperwork finally caught up with reality and Hoyle was officially returned to Butler by Joplin.

Butler finished first in the second half and also won its third straight playoff championship. Hoyle saw action on August 29 in the third game of the semifinals, an 8-3 loss to Johnstown. In February of 1943 the Pennsylvania State Association suspended operations. While this may have been intended to be for the duration of World War II, the League never returned.

On October 13 another Yankees affiliate, Norfolk of the Class B Piedmont League, exercised an option to select Hoyle and he was assigned outright to the team on October 24. Tex was placed on the National Defense Service List on this date as well. He served in the Army Air Corps, eventually being stationed in the Philippines. Norfolk continued to reserve Hoyle until his release from the service and his baseball reinstatement on February 8, 1946.

Thomas “Shaky” Kain was announced as the Norfolk Tars manager for 1946. Hoyle was noted as the one familiar face on the team after Kain’s two-year absence from baseball while doing war work.3

Early in that season, after losing to Hoyle, the Portsmouth Cubs went on an 11-game winning streak. No one could stop them until they faced Tex again on April 28, losing 3-2. Hoyle gave up only six hits but two of them were homers. Norfolk finished fourth in the league and lost in the first round of the playoffs to regular-season leader Roanoke, 4 games to 2. Newport News went on to beat Roanoke for the playoff championship.

In 1947 Hoyle was promoted to Triple A, the Kansas City Blues of the American Association. After pitching seven innings in two games, going 1-1 with a 2.57 ERA, Hoyle was assigned outright to the Binghamton Triplets of the Class A Eastern League, managed by future Hall of Famer Lefty Gomez. Gomez pulled Hoyle from a game in the ninth inning on September 6 and inserted himself in Tex’s place. After a bloop single by Gomez, the next batter ended the inning on a fly out. Being Gomez’s only at bat during the season he announced himself as a 1.000 hitter for the year.4 Binghamton finished the season in last place. Hoyle’s former team, Kansas City, finished first that year.

Tex returned to Binghamton in 1948. The 1947 season had been an injury-plagued year for the 6-foot-3-inch pitcher. He hurt his back while with Kansas City and was hospitalized for several weeks while with Binghamton. He weighed only 150 pounds when he reported to the Trips. During the offseason he had his teeth fixed and his tonsils and adenoids removed at a cost to the team of $2,700. A wag suggested that Hoyle’s gain of 27 pounds between seasons cost the team $100 a pound.5

Binghamton showed its faith in the revitalized pitcher by giving Hoyle the Opening Day start against Utica. He gave up five runs and was replaced by a pinch-hitter in the fourth inning. Binghamton won 9-6 after a three-run rally in the eighth. Hoyle was again placed on the disabled list, on July 13, suffering from bursitis in his elbow. He was reinstated on August 22.

During the offseason Tex was transferred to Manchester of the Class B New England League. The league suffered from the sudden easy accessibility of Red Sox and Braves games on TV and by July 19, after starting with eight teams, it dropped to four.6

Hoyle returned to the disabled list on June 19. He was reinstated on July 7 but was released on July 8. This was the end of his time with the Yankees. His brief stay with Triple-A Kansas City was the highest level he reached in the organization. By August he was playing in a Carbondale softball league to try to stay in shape for a hoped-for return to professional baseball.7

In May 1950 Hoyle was still in Carbondale, pitching in the local North End League for the West Side (Carbondale) team against Whites Crossing. He got a tryout with Bangor (Pennsylvania) team of the Class D North Atlantic League later that month but did not get a contract. He played for a local team in Pittston the rest of the season.8

Tex Hoyle continued to pursue his major-league dreams despite his setback during 1950. In 1951 he signed with Athletics affiliate Lincoln of the Class A Western League, joining his younger brother Alex in the A’s system.

Jimmie Dykes, the new manager of the A’s, gave free agent Hoyle a tryout. In order to impress the hard-driving Dykes, Tex threw nothing but fastballs for a 15-minute session. Knowing that Hoyle had chronic back problems, pitching coach Chief Bender cautioned him about overreliance on that pitch but Dykes was impressed enough to pencil Tex in for use in spring-training exhibition games.9 Displaying the musical talent that ran in the Hoyle family, Tex entertained the team after practice by playing boogie-woogie tunes on the piano.10

In an exhibition game in Miami on March 28, the A’s played the Brooklyn Dodgers in a game that lasted 13 innings. Hoyle came on in relief and in the seventh inning, he hit one batter, walked three and gave up a double to Jackie Robinson to allow the Dodgers to score six runs and tie the game, 7-7. The Athletics eventually lost, 10-9.11 Hoyle eventually was assigned to Lincoln for the start of the season.

Sore arms impacted the Lincoln pitching staff early in the season and the skinny Hoyle with the bad back pressed to complete games even though he had some arm troubles of his own. In June he suffered a ruptured disc in his spine that required surgery, sidelining him once again in his injury-racked career. Although the surgery was expected to keep Hoyle out for the season, he returned in late August with a three hit, 3-2 victory over Wichita. Hoyle pitched two one-hitters before the end of the Western League season and in October the Athletics called him up. More than a decade after starting his professional career, he had finally reached the majors. He does not appear to have seen any action with the A’s in ’51. His offseason included some appearances on the banquet circuit in the Carbondale area.

Hoyle was one of the first four A’s to sign their contracts for the 1952 season.12 Playing on the newly christened Connie Mack Field in West Palm Beach, Florida, he again pitched in exhibition games, and made the team out of spring training. Tex made his first major-league appearance against the Boston Red Sox at Fenway Park on April 18, entering the game in the ninth inning and giving up a double to Jimmy Piersall as the Red Sox rallied from a three-run deficit and tied the score. (Boston won in the 10th) The next day, in the second game of the Patriots Day doubleheader, he pitched the last two innings of the game, allowing one hit, but the A’s were down 6-1 when he entered the game and lost by that score. In his third and final major-league appearance, Hoyle entered a blowout with Philadelphia losing to Cleveland, 14-6 in the eighth inning. The Indians savaged Hoyle for seven more runs on seven hits in one-third of an inning. After the game he was sent down to Triple-A Ottawa.

Ottawa was in last place in the International League at the end of April, largely due to pitching problems. The Athletics had also sent another pitcher, Ed Burtschy, and shortstop Jack Littrell to Ottawa at the same time as Hoyle. The team went on a six-game winning streak after this infusion of new talent. Hoyle again ended up on the disabled list in May but returned to active status by mid-June. Hoyle started against Springfield on June 22 and held the Cubs scoreless for five innings before being replaced by Burtschy, who got the win when Ottawa scored a run in top of the 11th. Hoyle again went on the disabled list, not returning until July 24. Ottawa finished the season in seventh place.

The minor leagues were beginning to feel the full impact of television by the end of the 1952 season and clubs were beginning to reduce the number of farm teams they would support. Tex Hoyle and his brother Alex both saw the handwriting on the wall and, realizing opportunities to move up to the majors were shrinking, hung up their spikes at the end of the ’52 season.

Upon retirement Tex returned to Carbondale and went to work in a factory. He later got a job at Farview State Hospital for the Criminally Insane, and worked there until he retired. Hoyle died on July 4, 1994, at the age of 72.

Despite a career marked by a three-year absence while serving in the Army Air Corps during World War II and a number of injuries and surgeries, Rolland “Tex” Hoyle managed to break into the majors at the age of 30. While he held on in the big leagues for less than a month and made only three relief appearances, perseverance had earned him his “cup of coffee,”