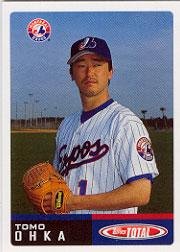 During the late 1990s, in an effort to expand the talent pool of available players, scouting departments of major-league clubs began to scout and then sign the most talented players from the Japanese professional baseball leagues. With the exception of Ichiro Suzuki, these players were mostly pitchers who would make their mark on professional baseball in the United States and open doors for Japanese players that remain open to this day. One of these pioneer hurlers was Tomokazu “Tomo” Ohka.

Tomo Ohka was one of three children born into “semi-poverty” to a single mother in Kyoto, Japan.1 Despite this tough beginning, by the time he was 18, the wiry Ohka (6-foot-1, 180 pounds) had attracted interest from professional scouts in Japan, and the Yokohama BayStars of the Japanese Central League ultimately drafted him. Once with the BayStars, Ohka had a hit-or-miss career. On one hand, he was stellar with the BayStars’ minor-league team, featuring an above average curveball and a fastball topping out at 92 mph. However, once Ohka began pitching for the BayStars major-league club, he struggled on and off the field.

On the field, “Ohka appeared in 34 games for the BayStars and was 1-2 with no saves and a 5.56 ERA in 57 1/3 innings” during the first part of his career.2 Moreover, during his stint with the BayStars from 1994-98, Ohka developed a reputation as an upstart who was unwilling to adhere to the strict hierarchal structure that permeated Japanese clubhouses. Though he only pitched two innings for Yokohama in 1998, the team won the Central League pennant. Ohka had dreamed of pitching in the American major leagues since he was in junior high, and he reportedly asked BayStars management to arrange a playing tryout with the Boston Red Sox Florida Instructional League team later in 1998. The Red Sox were impressed enough with his ability that they negotiated with the BayStars. This was the break Tomo Ohka was looking for. The Red Sox purchased his contract from Yokohama on November 20, 1998 for cash and a player to be named later.

The Sox signed him to a minor-league deal. Ohka was assigned to the Red Sox Double-A affiliate in Trenton where he went 8-0 before being promoted to Triple-A Pawtucket. There he posted a 7-0 record with a 1.58 ERA in 12 starts. Suffice it to say, this fast 15-0 start turned him from a project to a prospect and fast-tracked him to the majors during the 1999 season.

Once he got to Boston, Ohka made two starts and finished six others as the long man for the Red Sox. His major-league debut occurred on July 19, 1999 in Fenway Park against the Florida Marlins. That day, in front of 23,282, Tomo Ohka showed the Red Sox faithful that a chasm existed between Triple A and the big leagues and that Ohka still had a lot to learn to be an effective big-league pitcher. To lead off the game, Marlins second-baseman Luis Castillo reached on an error by shortstop Lou Merloni. Castillo then stole second and scored on a single by shortstop Alex Gonzalez. Gonzalez went to third on a single by the DH, Bruce Aven. At this point, Ohka recorded his first out when he gave up a sacrifice fly and an RBI to Kevin Millar. Mark Kotsay singled to move Aven to third base. Center-fielder Preston Wilson doubled, driving in Aven and moving Kotsay to third. On a comebacker to the mound, Ohka threw to first base for the second out while Kotsay scored to give the Marlins a 4-0 lead. Mike Lowell lined out to center for the inning’s final out. Ohka was charged with two earned runs.

The Red Sox were quickly dispatched, but things did not improve for Ohka in the second. Catcher Mike Redmond singled, and Ohka walked Castillo. At this point, Red Sox manager Jimy Williams lifted the rookie for reliever Pat Rapp. One of the inherited runners scored, after another Red Sox error. Ohka had faced 10 hitters and given up five hits and five runs (two earned) in his one-plus inning.

The Red Sox gave him a second start four days later, against the Detroit Tigers. This time he lasted 4 2/3 innings while giving up two home runs and seven runs (all earned). It was just over a month before he got more work; from August 24 to the end of the season, he made six more appearances, all out of the bullpen. He worked a total of 7 1/3 innings without an earned run, and gained his first big-league win during three innings against the Baltimore Orioles on October 10.

With this buoyant finish, and his 15-0 record in the minors, the Red Sox named Ohka their minor-league player of the year for 1999. Ohka was back in Pawtucket for the first four months of the 2000 season, compiling a 9-6 record, which included a perfect game against Charlotte on June 1.3 This performance, along with Ohka’s other work, earned him a call-up to Boston in July when Boston had a rash of pitching injuries in the starting rotation. Once he returned to the big leagues, Ohka made 12 starts and went 3-6 in two different stints as the Red Sox finished in second place (85-77) in the AL East. Ohka’s ERA for the season was a very good 3.12.

Once again, despite the mixed results between AAA and Boston, the Red Sox remained hopeful that Ohka would help stabilize a shaky pitching staff for the 2001 campaign. In fact, the national media was so sure that Ohka was going to help Boston in the coming year that Ken Rosenthal had him slated as the number four starter in the Sox rotation. Many teams coveted Ohka in offseason trade requests, but the Sox kept him on board. He pitched well during the Grapefruit League season and earned a spot on the Opening Day roster.

Ohka had a 2.67 ERA after six starts at the beginning of the season, but was hit hard in the May 10 game and was returned to Pawtucket, where he went 2-5 in eight starts. Returning to Boston in July, Ohka saw his ERA increase one appearance after another and he was up to 6.19 by the end of the month. The Red Sox were looking for a closer as they fought for an Eastern Division title, and dealt the once highly touted Ohka along with Rich Rundles in a two-for-one deal to the Montreal Expos for Ugueth Urbina.

For some pitchers, such a move ends up revitalizing a player. In Ohka’s case, the deal was the start of his time as a journeyman with a mix of results. In 2001, he finished 1-4 with the Expos with an ERA 4.77.

With a full season for the Expos in 2002, he compiled a winning record of 13-8 with a 3.18 ERA in 31 starts, leading his team in wins. But Ohka never quite fulfilled his promise. In 2003, he went 10-12 for Montreal and in 2004 he only made 15 starts due to injury. The franchise moved from Montreal to become the Washington Nationals in 2005. He was 4-3 in his first nine starts, with a 3.33 ERA. On June 10, he was dealt to Milwaukee for second-baseman Junior Spivey. Once in the Brew City, Ohka occasionally proved a bright spot for a perennially bad franchise. However, in the end, injuries plagued his time with the Brewers and Milwaukee released Ohka, making him a free agent at the end of the 2006 season.

In 2007, Ohka originally signed with the Toronto Blue Jays. However, his second stay in Canada was cut short after 10 starts when the Blue Jays released the ineffective (2-5, 5.29 ERA) hurler. Ohka played in both the St. Louis and then Seattle minor-league systems that year, before signing a minor-league deal with the Chicago White Sox in February 2008. He pitched in Charlotte and was 5-11 (4.18) in the Triple-A International League.

Ohka signed as a free agent for the 2009 Cleveland Indians. He made 18 appearances (six starts) and was a disappointing 1-5 (5.96 ERA) in what was his last big-league stint. He was not finished pitching, however.

In 2010, Ohka showed that you could go home again when he signed to pitch once again for the Yokohama BayStars. This time, Ohka went 7-9 (in 2010) and 0-6 (2011) during two seasons with the club that gave him his start. At that point, it looked like Ohka’s career, which had shown so much promise, was over. However, in 2013, Ohka signed a contract with the Japan based Toyama Thunderbirds of the semipro Baseball Challenge League. While there, he learned to throw a knuckleball and parlayed this new pitch to a minor-league contract with the Toronto Blue Jays in 2013.4

Despite his newfound talent, Ohka’s time with the Jays was short-lived. He was one of the first players cut from the Blue Jays camp in the spring of 2014. Following his attempt to get back into Major League Baseball, Ohka completed the 2014 season as a “low 50s knuckleballer” with the Atlantic League (Independent) Bridgeport Blue Fish. During that stint, the 10-year big leaguer compiled a 6-11 record with a 5.37 ERA.5

To write this biography, the author relied on statistical and game information from Baseball-Reference.com and Retrosheet.org as well as the following written materials:

Whiting, Robert. The Meaning of Ichiro: The New Wave from Japan and the Transformation of our National Pastime (New York: Warner Books, 2004).

1 Robert Whiting, The Meaning of Ichiro: The New Wave from Japan and the Transformation of our National Pastime (New York: Warner Books, 2004), 218.