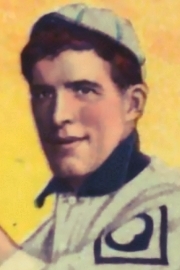 Walter Moser pitched for three teams in 1906 and 1911 – the Philadelphia Phillies, Boston Red Sox, and St. Louis Browns. His major-league record was 0-7, losing four games for the Phils, one for the Red Sox, and two for the Browns, with an earned run average which climbed from one team to another: 3.59 for Philadelphia, 3.01 for Boston, and 21.60 for St. Louis.

Moser’s first games in pro ball were for the Lynchburg Shoemakers, in the 1906 Virginia League. Only two members of the team ever made it to the majors – Moser, who played in just 14 games for the three big-league teams, and infielder Cliff Daringer, who played in 64 games in 1914 for the Federal League’s Kansas City Packers.

With Lynchburg, “Herr Moser” (as he was called in some of the local papers) was a star. It may have just been Class C baseball, but he was more than a 20-game winner, putting up (according to Baseball-Reference.com) a 24-8 record while working a full 298 innings. It was the first season for the Shoemakers, managed by Jack Grim, the return of organized baseball for Lynchburg for the first time in ten years – since 1896. He’d gotten off to a terrific start, winning his first 16 games.1 As of July 1 he was 17-2, having lost his second game on June 26, to Danville, 9-6. He had been pursued by an “outlaw league” in Pennsylvania, but said he’d not jump his contract to take advantage.2

His best game was the June 14 game against Portsmouth, a 1-0 three-hitter that lasted 15 innings. Sporting Life said his final record was 26-5, and that “half his victories were shutouts.”3 Whether 24 wins or 26, he led the league in wins and winning percentage, and Lynchburg won the pennant by nine games.

Lynchburg was perhaps lucky to have had him. There had been some jockeying to claim rights to him before the season began. Danville had wanted him, but so did Lynchburg, and the National Board had to rule on the subject, sustaining Lynchburg’s claim in early May, before the Virginia League season began.4

Moser didn’t stay with Lynchburg, though. A deal was done, just before the August 25 deadline (no minor-league player could be signed between the 25th and October 15) and the Philadelphia Phillies purchased the rights to his contract. It was a team that needed to restructure, and they didn’t want to wait until 1907. The Sporting News reported, “This reconstruction will prove a hard task for the management and will test its resourcefulness to the utmost; but it will have to be done. The management is not shirking its responsibility…The management is also preparing to do some experimenting for balance of season with pitchers and catchers. The star pitcher of the Virginia League, Moser, of the Lynchburg Club, has been bought and will report in a few days. The club has also signed pitcher George Bell and catcher George Starnagle, of the Altoona Club.”5

Understandably, winning as many games as he did, he developed a following. “Moser’s great work for Lynchburg has won him hundreds of admirers in Virginia, and when he goes to the Philadelphia Club the best wishes of the fans will follow him.”6

In his September 3 debut, he “made a fine impression.”7 But he was 0-4 (with a 3.59 ERA and a WHIP of 1.500) for the Phillies, and the number of runs scored indicates that he was far less effective than his earned run average would indicate. He threw 42 2/3 innings and gave up 35 runs – but only 17 of them were earned. A lot of the runs scored in the September 17 game against the New York Giants, when Moser gave up 15 hits and walked seven batters, for 13 runs. Games like that probably didn’t make that fine an impression.

Right after the season was over, however, Lynchburg manager Grim wrote Philadelphia sportswriter Francis C. Richter, “Sorry to see that Moser has not yet come up to expectations. I still think, however, that he is good enough for fast company. My opinion is that Moser was kept idle too long and not worked regularly enough. He requires lots of work to make him effective. I’ll wager that if he is retained and gets off right in the spring he’ll make good.”8

As it happens, he pitched the next four years in the minor leagues. College connections may have played a role in the way he turned up in the Tri-State League, working for Trenton. “The Philadelphia Club has transferred a battery pitcher Moser and Catcher [Ches] Grist to the Trenton Club, whose owner, Col. Lewis Perrine, is an old Princeton College chum of Director James Potter.”9 Moser himself was somehow connected with education. A piece in the Philadelphia Inquirer called him “the school teacher twirler.”10

Walter Moser had been born in Concord, North Carolina, on February 27, 1881. His father Tim Moser was a farmer in Mount Pleasant, perhaps a bit of a gentleman farmer. The 1900 census shows him and his wife Mary with six children and two servants and a 1911 article in the Charlotte Observer refers to him as Squire T. A. Moser.11 A 1918 article in the Trenton paper talked about his father’s “big plantation.”12

In 1907, Moser was sold to Trenton for $500 and pitched to a 14-14 record.13 Late in the season, still on his Phillies contract, he was called up by the Providence Grays and pitched in the September 20 game, winning the rain-shortened five-inning affair against Rochester, 13-0.14 Then Philadelphia transferred him from Providence to Baltimore in the Eastern League, in exchange for pitcher George McQuillan.15 There is no indication he pitched for Baltimore. In fact, an article in the Trenton Evening Times said he was drafted by Atlanta at the end of the season and that team turned him over to Lynchburg.16

We do know that he worked for another Tri-State League team – Lancaster (Pennsylvania) – in 1908, having signed with it in March. He was 19-15. By November, still under the Phillies’ control, he was back with Lynchburg for 1909.

He was saddled with a substandard team behind him. When Roanoke visited Lynchburg on June 7, “stupid playing and rank errors on the part of the Lynchburg team were responsible for the four runs…Moser pitched good ball, the kind that would win a big majority of the games, but with nine errors behind him the case was hopeless.”17 When the defense tightened, he could win and those watching Moser took notice when he shut out the reigning champion Richmond team with back-to-back games in the July 20 doubleheader, 18 innings of scoreless ball, with wins of 2-0 and 9-0. He threw a two-hitter on August 10 against Norfolk. Lynchburg came in last in the Virginia League, but Moser was a 20-game winner for a 50-74 ballclub. Sporting Life observed, “Moser, of Lynchburg, has not the best pitching record of the league, but when taking into consideration the disadvantage he worked under it looks like he has a right to be called the best pitcher in the league.”18

His final record was 20-18 and he was drafted by the Oakland club of the Pacific Coast League. Incoming manager Harry Wolverton knew Moser from the Phillies system.

The seasons were longer in the P.C.L. and so while he lost 20 games in 1910, he more than made up for that by winning 31. Wolverton’s Oaks came in second, behind the Portland Beavers, Oakland’s final record at 120-101. On July 23, the Boston Red Sox paid Oakland $3,500 for the rights to his contract, with Moser to report in the spring.19

Red Sox Spring training 1911 was held in Redondo Beach, California. He joined the team in New York as they headed west by rail, trained with the team in California, and then barnstormed east with them, crossing the country. He got beat up pretty well a few times in the springtime, and saw little duty with the big-league club once the regular season began.20 The Red Sox hadn’t really wanted to keep him; they had had their look and planned to sell him back to Oakland – but they couldn’t get him through waivers and, apparently for that reason, kept him on the ballclub.21 Moser appeared in just six games, three of them starts between June 17 and July 10. He lost one game and was without a win, with an ERA of 4.01.

The Red Sox sold him to the St. Louis Browns on September 1. He was 0-2 with a 21.60 ERA for the Browns, leaving him with the 0-7 record and a career 4.58 ERA in the majors. These were his last days in major-league ball.

Trenton was reportedly interested in him in April 1912 but he somehow ended up on a Chicago White Sox contract and was dealt to Sioux City.22 He was 0-1 for the Sioux City Packers (Western League), only working in 17 1/3 innings, and later in the year was back east pitching for semi-pro teams in Morrisville.

Moser wrapped up his career back in the Tri-State League, starting the season with Trenton – released on June 12 – and then working for Atlantic City. He was 12-15.

Complicating our efforts to find out just how his career wound down is the fact that he was suspended and on the Reading club’s reserve list at the end of 1914. Reading was another Tri-State League club.

After baseball, we know little of his life. He kept active for a while. In 1919, he was the manager of a team called the De Laval Steam Turbine nine, a Delaware River League team named after a New Jersey company.23

In 1922, he was living in Bastrop, Louisiana where he managed the local team and kept his hand in pitching.

At the time of his registration for the draft during World War II, he was living in Philadelphia and working for Gulf Oil with his wife Arline Moser. What the work for Gulf Oil consisted of is unknown, but back in 1931 he’d been living in Atlantic City and managing a gas station, possibly a bit of a comedown for a plantation owner’s son.24 Perhaps his career had rebounded, however; on his death certificate, however, he was described as an executive with Gulf Oil.

Moser died of cardiac problems on December 10, 1946 in Philadelphia.

In addition to the sources noted in this biography, the author also accessed Moser’s player file from the National Baseball Hall of Fame, the Encyclopedia of Minor League Baseball, Retrosheet.org, and Baseball-Reference.com.

13 The Philadelphia Inquirer of August 3, 1907 reported the sale amount.

19 Numerous sources reported the sale and the amount, including the Boston Globe, Denver Post, and Salt Lake Tribune, both in their July 23 editions.