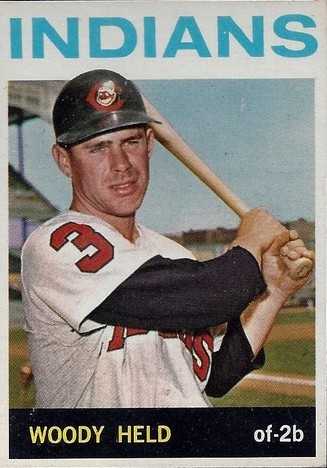 Hot Doggers!
Four homers in a row we got,
A new league mark, last word in swat.
The Yankees never saw the day
Or night when they could slug that way.

That was the ditty written by James E. Doyle in the August 1, 1963 edition of the Cleveland Plain Dealer. Four Cleveland batters hit consecutive home runs in the sixth inning off Los Angeles Angels pitcher Paul Foytack. With two outs in the frame, Indians third baseman Woodie Held hit a bomb to left field. He was followed by pitcher Pedro Ramos, who hit his second of the game. The parade continued with Tito Francona and then second baseman Larry Brown, whose homer, just clearing the left field fence, was the first of his career. The crowd of 7,288 went wild with the sudden power surge on display.

It was the first time the feat had been accomplished in the American League. The Milwaukee Braves had become the first major league team to hit four home runs consecutively in 1961. For the Indians, the 9-5 victory climaxed a doubleheader sweep of Los Angeles. It was a stark contrast to the 10-strikeout 1-0 performance by Barry Latman in the opener.

The Indians were in a joyful mood in the clubhouse. “Funny thing,” said Brown. “On the second strike I pulled a nerve in my neck as I swung. I had to shake it off before I went back into the box.”1

Paul Foytack could only laugh. “What else is there to do but laugh?” he said. “I was glad to get out of there alive. It’s the first time I ever was cheered by the fans after leaving the mound on being knocked out.”2

What about the man who started the record-breaking run of consecutive homers? Woodie Held was sitting in front of his locker, enjoying the banter. He said nothing, but wore a big grin.

Woodson George Held was born on March 25, 1932, in Sacramento, California. He was the son of Fred and Julia Held. Fred Held worked as a lineman for the telephone company. Woodie caught the baseball bug as a youngster of 13, when he worked as a batboy for the Sacramento Solons of the Pacific Coast League. He served in that capacity for three seasons. Held was a four-year member of the varsity baseball team at Sacramento High School, playing every position but catcher. After graduation, Held was signed by New York Yankees scout Joe Devine. A $6,000 signing bonus was included.

Held reported to Twin Falls, Idaho, of the Pioneer League in 1951. From there, he climbed the ladder through the Yankee farm system, ascending a level each season. In 1954, he went to camp with the Yankees. Held made his major league debut as well on September 5, 1954, albeit as a late-season call-up to the Yankees, who were in a tight pennant race with Cleveland.

In 1955 he returned to the minor leagues with the Denver Bears of the American Association. Held hit 18 home runs that season, and smacked 35 more, with 125 RBIs for the Bears in 1956. He was moved to third base, as Tony Kubek was being groomed as the heir apparent Yankee shortstop.

New York manager Casey Stengel thought highly of Held. “He is a very good player and I like his attitude,” said Stengel after he sent Held back to Denver in 1957. “The ball sings when it goes off his bat. I told him before the year is up, he’ll either be back with me, or with some other big league club. I seldom tell that to anybody who leaves here. Held was a little outfielder that I told to play shortstop when I thought we needed one. But now I wish he wouldn’t play shortstop because he can hit hard at third base and he is even a pretty good centerfielder because he has that long arm. He throws as good or better than any outfielder I got.”3

Stengel was right; Held did see the major leagues again in 1957. However, his return was influenced by events that came to pass away from the ballpark. On the evening of May 16, several of the Yankee players, including Whitey Ford, Mickey Mantle, Billy Martin, Yogi Berra and Hank Bauer, went out for the evening to celebrate Berra’s and Martin’s birthdays. The party ended at the Copacabana, a popular New York nightclub. A bowling team, who had just won their league championship, was celebrating at the next table. The keglers were drinking heavily and began to bait the ballplayers. Allegedly, a fight broke out between Bauer and a bowler; although it was unclear what had happened, the incident made headlines the next day. A lawsuit ensued, but it was later tossed out for lack of evidence. Nevertheless, New York general manager George Weiss immediately held Martin responsible. Weiss had a prejudice against the popular Martin, believing that he was a bad influence on the other players. The incident gave him all the reason he needed to unload him. A month later, Martin, pitcher Ralph Terry, outfielder Bob Martyn and Held were dealt to Kansas City.

Held was inserted in center field by manager Lou Boudreau. He led the league outfielders with 12 assists, while playing in only 92 games. But it was his bat that got Boudreau’s attention. “He could become one of the great major league hitters because he has great wrist action,” said the skipper. “He reminds me somewhat of Ted Williams in that respect.”4 Although Held only batted .239, he clouted 20 homers and drove in 50 runs for the Athletics. His numbers were the second-best on the team, behind only Gus Zernial (27,69).

One of Held’s weaknesses that year would prove to be constant for his career. He struck out 81 times in 326 at bats, a four-to-one ratio.

Exactly one year after landing in Kansas City, Held was again part of a multi-player deal, this time going with Vic Power to Cleveland in exchange for Roger Maris, Preston Ward and Dick Tomanek. Indians manager Bobby Bragan was thrilled with the new acquisitions. “We’re building the type of team we want,” said Bragan. “I haven’t seen much of Held, but what I’ve seen, I’ve liked. A few weeks ago we couldn’t get him at any price. Right now, I plan to play him in center field, but third base is a possibility.”5

However, not everyone was on board with the swap. Indians’ pitcher Mudcat Grant remarked, “That was a bad deal for us because Roger was better than both players we got for him. The guy was a star!”6

Unfortunately for Bragan, he was shown the door eleven days after the deal. Former Yankee and Indian great Joe Gordon replaced him. He positioned Held at shortstop. “Woodie Held was a strong kid who could hit the ball a ton and run well,” said Cleveland infielder Billy Moran. “He also made a lot of errors at short. Woodie wasn’t smooth enough to be much of an infielder and was at that position only because Gordon wanted his bat in the lineup. I thought he’d have been better off playing center field like Mantle, who was a converted shortstop.”7

Gordon and Held both lived in Sacramento in the offseason. Gordon worked with Held to abandon his upper-cutting style of hitting and to level off his swing. Gordon even benched Held a game for not following instructions while at the plate. “Joe has to get on me once in a while and I appreciate it,” said Held. “I have to keep my shoulders back, hold up until the last minute and then try to snap into the ball. Once I get into the practice of swinging right it should become as natural as it was to swing wrong.”8

Cleveland was in a tight pennant race with Chicago in 1959. They battled neck and neck with the White Sox all season, but finished in second place. A large part of their success was due to Held, who stroked 29 homers, a career high. He hit 22 of those while playing shortstop, which was a team record until Jhonny Peralta, eclipsed that mark in 2005 with 24.

The next season, on July 18, Held broke his middle finger while taking a throw from Johnny Temple on a double play. He was leading the team in homers (15) and RBIs (50), and the club missed his power for the six weeks he was sidelined.

From 1959 through 1964, when he was playing regularly, Held averaged 21 home runs a season. However, he struck out more than 100 times in three of those seasons, and in another he whiffed 96 times. It was feast or famine for Woodie. Except for 1959, the Indians were not very competitive in those years, usually finishing more than 20 games off the pace. They had some nice players, but no superstars, and they could not keep up with the better teams. For the Indians, it was either too little hitting or too little pitching. They could never quite field an abundance of both in the same year. Also, there was a revolving door to the manager’s office. After Gordon, Jimmy Dykes, Mel McGaha, George Strickland and Birdie Tebbetts all took turns prowling the dugout during Held’s time on the north shore.

On December 1, 1964, Held and Bob Chance were dealt to Washington for outfielder Chuck Hinton. “We haven’t had anybody like him who can fill in so many spots,” said Senators manager Gil Hodges. “Held is by no means a throw-in on this deal. Woodie is going to serve as my swing man.”9 Hodges employed Held in exactly that way. He played in all three outfield positions, second base, third base and shortstop. The 1965 season would be the last in which Held appeared in over 100 games.

Over the next four seasons, Held made stops in Baltimore, Los Angeles, and Chicago. The Orioles won their first world championship in 1966, and although Held did not see any action in the World Series, he bragged that he “had the best seat in the house” in the dugout. He served in utility positions with both the Angels and White Sox.

In retirement, Held raced snowmobiles competitively for several years. During the later years of his baseball career, he made his offseason home in Dubois, Wyoming, where he operated a dude ranch on 600 acres. He opened the first pizzeria and started the first Little League in Dubois. He was a fan favorite at the Indians’ fantasy camps. In 2001, he was named one of the 100 greatest Indians of all time in a celebration of the franchise’s 100 years in the American League.

Woodie Held died on June 11, 2009, after a seven-month battle with brain cancer. He was survived by his wife, Nadine, his children, 15 grandchildren and 13 great-grandchildren.