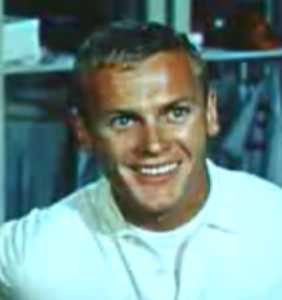 This article was written by Mark Pattison

Every so often there comes a phenom who streaks across the baseball sky like the flash of a comet, leaving only the faintest of light in its wake. Among them are Mark Fidrych, “Super Joe” Charboneau, and Bob “Hurricane” Hazle.

Remember to add the Washington Senators’ Joe Hardy to that list.

Hardy, born Joe Boyd in 1934 in Hannibal, Missouri—exact birth details are frustratingly missing, something that Hardy/Boyd today attributes to sloppy record-keeping at the city clerk’s office, exacerbated by an understaffed municipal government during the throes of the Great Depression—played just one year, 1956, for the Senators. But what a year it was!

Coming seemingly from out of nowhere, exhibiting talent that made it seem as if he had made some kind of deal with the devil, he helped the perpetually second-division Senators—“first in war, first in peace, last in the American League”—make a stunning run at the New York Yankees’ hegemony atop the junior circuit.

It may be that, with some 160,000 minor leaguers to track, the Society for American Baseball Research just hasn’t gotten around to it yet, but like his birth information before it, Hardy’s minor league records are missing from the SABR Minor Leagues Database.

Because he joined the club midseason, Hardy—the erstwhile “Shoeless Joe from Hannibal, Mo.,” as he was enshrined in Damn Yankees, the stage and movie musical that told his story—never accumulated the minimum number of plate appearances needed to qualify for the batting title, nor did he tally big enough numbers to be listed among the season’s leaders in any cumulative category, but the 22-year-old Hardy was an instant hit.

“Came upon the scene, fresh as Listerine,” noted one scribe. “Arms of steel, like Hercules, fleet of feet, as Mercury’s,” rang the hosannas to Hardy’s talents as a sleepy nation’s capital awoke to its first real pennant chase in more than a decade. Hardy’s .354 batting average, coupled with 27 homers—an astounding number given the cavernous dimensions of his home ballpark, Griffith Stadium—and 78 RBIs not only made the team better by his presence, he also made his teammates play better.

“They’ll build a new wing for you in that baseball museum in Cooperstown,” declared “Mister Applegate,” Hardy’s self-styled representative. Hardy seemed to shun Applegate but didn’t come close to disowning him and his assertions until near the end of the season. Maybe it was because Hardy was too busy smacking extra-base hits and ranging deep within the nether regions of Griffith Stadium to chase down fly balls as the Senators began their long, Sisyphean climb up the AL standings. It was more likely due to allegations that Hardy was really Owen “Shifty” McCoy, a career bush leaguer who had once thrown games in the Mexican League. Although Hardy had a hard time proving who he was at a hastily called inquiry during the season’s final weekend, he had a much easier time proving who he was not, and was cleared to continue playing.

The National Baseball Hall of Fame and Museum never did establish a separate shrine to Hardy. Still, his feats remain the stuff of lore that no four walls could contain.

In fact, it was during the season’s final game—as fate would have it, against the Yankees—that Joe Hardy made an exit that no four walls could contain. Charging after a fly ball off the bat of pinch-hitter Bob Cerv—in which a hit meant a pennant for New York and an out meant a pennant for Washington—Hardy seemed to visibly age before a packed Griffith Stadium crowd as he ran after the spheroid. Somehow, he caught up to the fly, speared it at knee height, then kept on running—through the groundskeeper’s gate, down a tunnel, and out the stadium, where, still in uniform, he caught a cab to an unknown destination.

Few, if any, spectators would have believed that Hardy’s exit from the ballpark also represented his exit from the sport. He sent a telegram to Senators management saying he was retired. “I’ve fulfilled my dream,” Hardy wrote. “Now it’s time to be an average Joe again.” Fans would never accept that Hardy approximated average. But the retirement stuck. The Senators, without Hardy, were swept in the World Series and returned almost immediately to their jocular, but predictable, losing ways.

Not even the spirit or memory of Joe Hardy could help the team in later years, as it bade farewell to the District of Columbia to take up residence in the Minneapolis–St. Paul region of Minnesota as the Twins. Nor did it help the second, expansion incarnation of the Senators, who also lost with consistent frequency and turned tail to Texas after the 1971 season.

In a 1973 interview, Hardy’s manager, Benny Van Buren, said, “Y’know, I always thought you’ve gotta have heart to play this game, but that Joe Hardy played with both heart and soul. To this day, I never seen a ballplayer with as much natural skill.”

There was speculation that Hardy was being distracted not only by Applegate, but by a “baseball Annie,” Lola, or “Senora McCoy,” who even dared to enter the Senators’ locker room—which, a half-century ago, was still a sacred, men-only spot. But whatever charms Lola might have had, Hardy did not ultimately succumb to them. Rather, Hardy settled down and married Meg Boyd. One irony is that Boyd bore the surname Hardy had when he was born. Compounding the irony is that Boyd’s first husband was also named Joe, and that he was a passionate Senators fan who apparently had deserted Meg after watching yet another Washington loss on television.

But Joe Hardy and Meg Boyd, two lost souls on the highway of life, lived the prototypical happily-ever-after story. “A man doesn’t know what he has till it is no longer around,” Hardy said in a post-retirement interview. “I didn’t know what I had till I said ‘Goodbye, old love.’”

Hardy said he was snuck into the 46th Street Theatre on Broadway to see a matinee show of Damn Yankees. “The last thing I wanted or needed was to be treated like a celebrity. That’s why I gave up after one year in the majors,” he said. He remembers sitting in the third row and watching Gwen Verdon as Lola dancing seductively around Stephen Douglass, who landed the role of Joe Hardy for the Great White Way. He also recalls not leaving his seat during intermission, in part to keep from being spotted but also to soak in his one amazing year as it was being retold as a musical comedy.

“It’s not like they gave some kind of veto power over the script,” Hardy said. “They never gave me any money for my life story, which I guess is OK since I never thought anybody would pay attention to a Broadway show about baseball, much less about me and baseball.” Damn Yankees ran two-and-a-half years—1,019 shows in total—on Broadway, a feat that still makes Hardy shake his head in amazement. “My goodness,” he said upon being told the numbers. “I didn’t know there were that many guys who hated the Yankees that much in New York City. Must’ve been a lot of Dodgers and Giants fans who brought their wives with them to the show.” By coincidence, the show concluded its run just as the Dodgers and Giants announced they were deserting the Big Apple for the West Coast.

Verdon, Ray (“My Favorite Martian”) Walston as the devilish Applegate, and some other cast members from the Broadway show made the trek westward as well, reprising their Broadway roles in a film version of Damn Yankees that hit the silver screen in 1958. Hardy said he was asked to join a promotional tour for the film as it debuted in a host of downtown movie palaces throughout the country, but demurred. Instead, he waited until it came to the old Newton Theatre in northeast Washington, where he settled after his brief but brilliant career. The Newton was a second-run movie house that now houses a drugstore.

Hardy also keeps his own counsel as to whether he preferred the Broadway or Hollywood version. “I tell you one thing,” he chuckled, “I don’t know if Gwen Verdon’s legs looked better from 12 feet away or blown up to two or three times their real size.”

But he does admit to catching the occasional high-school or community theatre production of Damn Yankees. “They may not be the most talented actors on earth, but they put so much enthusiasm into what they do. When the guys in the locker room sing ‘You’ve Gotta Have Heart,’ that’s what makes me smile more than anything. It reminds me more of myself when I was playing, and it’s nice to take that trip back in time when I was young and innocent. I’m not as young today, but I hope I’m close to being that innocent.”

Asked where his travels might take him in the near future, Hardy replied, “Oh, hell.” He paused for a moment, and then added, “Everybody asks me that question.”

Note: A version of this biography appeared in Bob Brown, ed., The National Pastime (SABR: 2009).

Thorpe, Gloria. “Benny and the Jet That Was Joe Hardy.” Washington Post-Mortem, April 3, 1973