Members of SABR’s Allan Roth Chapter conducted its fifth meeting with Alzheimer’s Los Angeles on February 24, 2019, and we put a couple of new wrinkles in the mix, which were very successful.

This month’s theme was the Los Angeles Dodgers, and we presented the history of Dodger Stadium (by SABR member Jeff Hubbard) and the history of the Dodgers-Giants rivalry (myself). Jeff and I wore each team’s regalia in keeping with the theme (he wore a Drysdale jersey while I wore a McCovey jersey).

We asked our group after our last gathering what subjects or activities they’d like to see, and one caregiver who doesn’t know much about baseball suggested a history of Dodger Stadium. Anne, “Memory Mornings” lead for ALA, suggested a physical activity on the patio. We listened and made them agenda items for this meeting.

So, I brought in a bucket of plastic balls, and we got the group to play soft toss. They loved it! Then we played a game where the attendees tried to toss the ball into the bucket. It was a bright, sunny day, and the activity got us out of the conference room and into the fresh air to play ball. EVERYONE participated.

After the ball playing, we stood outside and heard from patient John, who shared the MLB ballpark tour he and his wife were taking.

We didn’t do show and tell today, in lieu of the outdoor activity.

The other new component was my playing guitar to accompany the group with the national anthem and Take Me Out to the Ball Game.

Anne let me know ALA is procuring tickets to a Dodger game for the entire group to attend this season.

The other big news is that I have connected with the Veteran’s Administration Home for Heroes in West Los Angeles, and our first meeting is set for March 30. I’ll share more info when available.

Thanks for the support and good vibes! 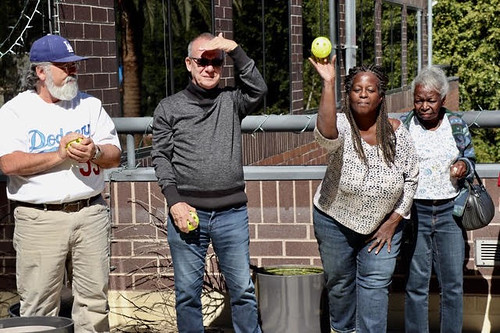