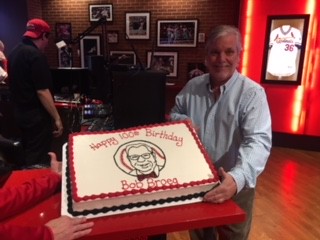 Members and guests of the Bob Broeg St. Louis Chapter celebrated the 100th birthday of Bob Broeg on Sunday, March 18, 2018, at the Cardinals Nation Restaurant in Ballpark Village in downtown St. Louis.

Broeg, who passed away at the age of 87 in 2005, was a long-time sportswriter for the St. Louis Post-Dispatch, beginning in 1945 and writing his final column in June 2004. He was awarded the J.G. Taylor Spink Award by the BBWAA in 1979. He was also a longtime member of SABR and attended the monthly meetings of the chapter that bore his name on a regular basis.

Brian Finch, Museum Operations Manager for the St. Louis Cardinals Hall of Fame & Museum, was the emcee for the event. The festivities began with a video of Bob Broeg recounting his involvement in the moment when the diminutive Eddie Gaedel pinch-hit for the St. Louis Browns on August 19, 1951. Broeg had been tipped off of the event by Browns owner Bill Veeck the night before and made sure that the Post-Dispatch sports photographer remained for the beginning of the second game of that day’s doubleheader long enough to get the iconic photo of the moment.

Greg Emmenegger, Broeg’s stepson, addressed the crowd and spoke of his stepfather’s kindness to everyone, especially his mother, and his sister and him. He also spoke how new employees, at both the newspaper and KMOX radio, where Bob did a weekly segment with fellow sportswriter Bob Burnes, would be invited home for dinner, including a young Bob Costas. Greg was also kind enough to bring multiple copies of several of Broeg’s authored and co-authored books with him to pass out freely to members of the chapter.

Benjamin Hochman, current sports columnist for the St. Louis Post-Dispatch, spoke of how he and the other sportswriters at the paper realize the importance of carrying on the tradition of excellent sports coverage, treating it like an heirloom. J. Roy Stockton was a mentor to Bob Broeg, who became Rick Hummel’s, who became Derrick Goold’s, who is now Hochman’s. Hochman says he is reminded of that tradition every day that he arrives at the ballpark and enters the Bob Broeg/Rick Hummel press box at Busch Stadium III.

The rest of the afternoon was relegated to dining, enjoying cold beverages, watching the St. Louis Cardinals spring training game versus the Washington Nationals (which the Cardinals won handily 10-0), talking baseball, swapping memories of Bob Broeg, singing “Happy Birthday” and “Take Me Out to the Ballgame” during the seventh-inning stretch.

In between innings of the game, Finch was strolling through the restaurant and posing trivia questions about Bob Broeg to the patrons of the restaurant. The SABR members were good to provide some not-so-subtle hints to the contestants so that not a single question was missed all afternoon. Prizes included autographed baseballs, bobbleheads, books, and restaurant gift cards.

Everyone was also able to enjoy birthday cupcakes provided by the restaurant and birthday cake provided by chapter member Carl Riechers. It was a very enjoyable afternoon and we would especially like to thank Brian Finch, Cardinals Nation Restaurant, and Greg Emmenegger, along with everyone that was able to attend.

The next regular chapter meeting will be Monday, April 23, 2018, at the Sports Café in Bridgeton, Missouri. You can order from the menu starting at 5:15 pm with the meeting starting at 6:45 pm.