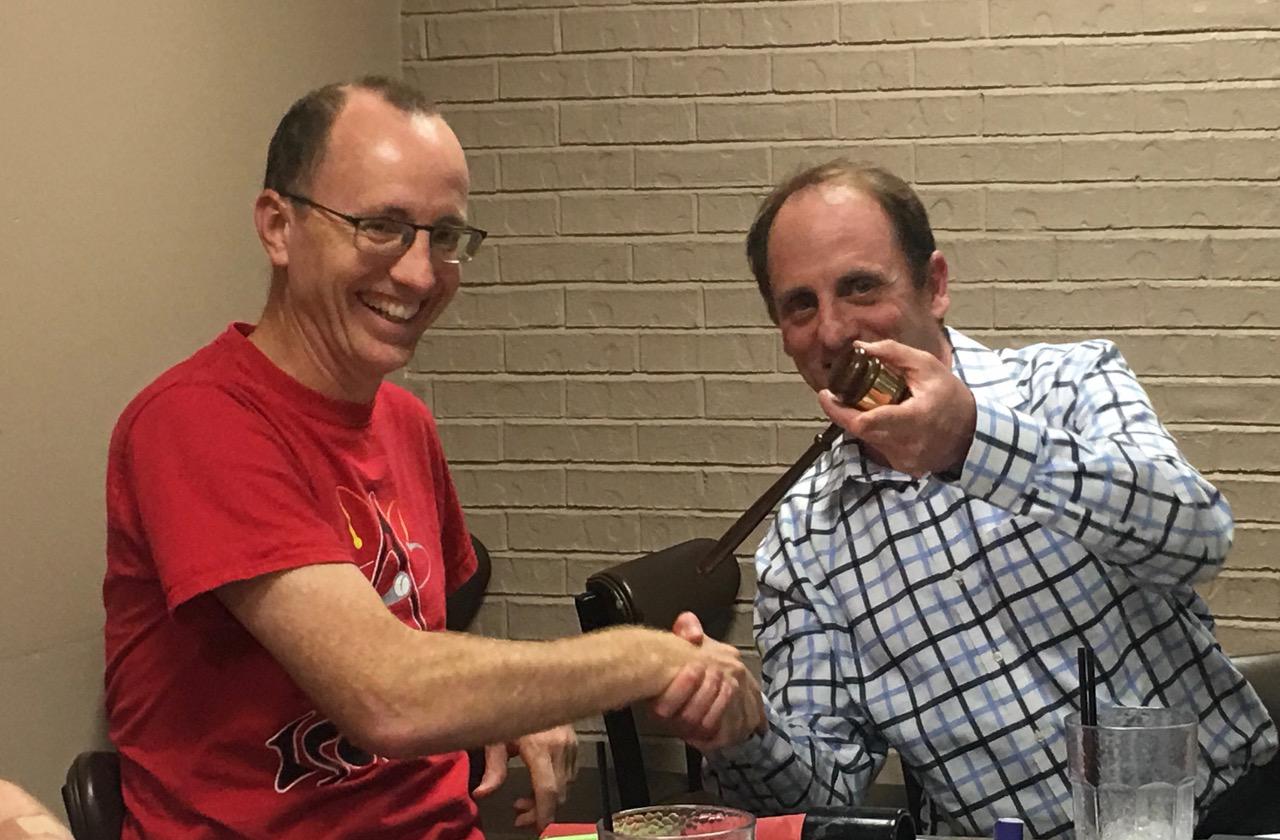 Twenty-one members and guests of the Bob Broeg St. Louis Chapter gathered at the Sports Cafe, located at 3579 Pennridge Drive in Bridgeton on Monday, April 23, 2018.

Chapter president Brian Flaspohler called the meeting to order. The attendees were honored by the presence of Ed Mickelson, former first baseman for the Cardinals, Browns, and Cubs, along with his lovely wife Mary.

Items mentioned for this date in baseball history were: 1927 – In the top of the seventh in the Phillies game against St. Louis, a section of the right field stands of Baker Bowl collapses, causing hundreds of fans to fall on the patrons below. Although there are many injuries, the only death is caused by the stampeding crowd. 1939 – During the Indians’ 9-4 victory over the White Sox at Comiskey Park, a woman, in the stands near the visitor’s dugout, is injured when Marv Owen’s foul ball strikes her just above the eye. The Indians’ starting pitcher, her 20 year-old son Bob Feller, threw the pitch that resulted in Mrs. Feller needing seven stitches on Mother’s Day. 1952 – Ron Necciai struck out 27 batters in a 9-inning no-hitter for the Bristol Twins, winning 7-0 over the Welch Miners in the Class D Appalachian League. He remains the only professional pitcher to record 27 strikeouts in a nine-inning game. Four men reached base: a walk, a hit by pitch, an error, and a passed ball on a third strike. In his next start he threw a 24 strikeout no-hitter. Mr. Mickelson mentioned that he and Necciai were teammates on the 1951 New Orleans Pelicans in the AA Southern Association. Also mentioned was the May 14, 1988 game between the Cardinals and the Braves that went 19 innings with the Braves winning 7-5. The losing pitcher was the Cardinals’ utility man Jose “The Secret Weapon” Oquendo who pitched the final four innings for St. Louis. Bob Tiemann shared copies of the box score and the St. Louis Post-Dispatch article of the game.

Rick Zucker mentioned that he had been contacted, by a representative of K.A.R.E. Camp, to see if there was a possible project or service opportunity for their group, which involves children between the ages of 7-14, and the chapter. Ed Wheatley, mentioned that he is coming out with a children’s book in a few weeks, titled “Incredible Cardinals” and that perhaps the book could be used as a possible reward for the children in their community efforts.

John Schoon gave a book report on “Electric October” by Kevin Cook about the 1947 World Series between the Yankees and the Dodgers. The book largely focuses on some of the more obscure role players on the teams and he shared a few anecdotes on Cookie Lavagetto, Snuffy Stirnweiss, and Al Gionfriddo.

Some of the topics for general discussion were the “Mendoza Line” Cardinals with players like Matt Carpenter, Dexter Fowler, and Kolten Wong hovering around the .200 mark, Yadier Molina’s injury and its impact on the team, the sad misfortune of Adam Wainwright’s pitching woes, the low attendance all around baseball, and the possible trade/acquisition? of Manny Machado.

Bob Tiemann’s trivia topic was “The Charmed Circle – 20-Game Winners in the 21st Century”. Morris Buenemann was the winner with a score of 32 out of 47. He received a recent stadium giveaway Cardinals pull-over as a prize.

The chapter’s next First Wednesday Meeting will be June 6. The next regular monthly meeting will be Tuesday, June 19, 2018 at the Sports Café in Bridgeton.