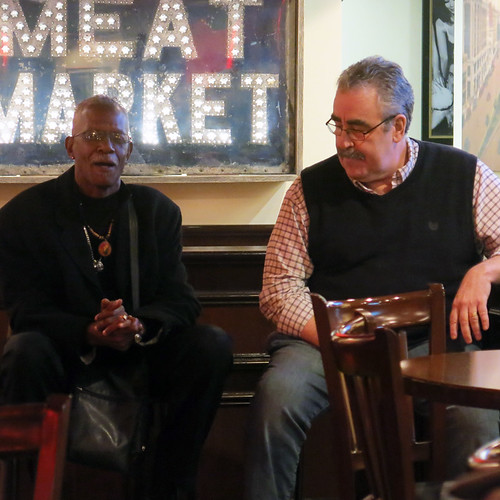 On November 2, 2019, the SABR Boston Chapter met at a new location and at a new time to acknowledge the end of another baseball season. And frankly, we did not spend too much time talking about the recent World Series, but be that as it may, it was certainly at least in the back of our minds. WE have so much else to consider in Boston, what with a new general manager and the threat of losing Mookie, because they hint that we can’t afford him? But enough hand-wringing.

This year, the meeting was held at Fenway Johnnie’s on Brookline Ave, just a few steps down the street from Fenway Park, that now lies quiet except for the echoes of last year’s World Series that still linger upon the breeze in that elegant little band box … that Faberge egg of a ballpark — but I digress. The meeting was also held at a time not tried before, from 4:00 to 8:00 p.m. All worked out well, as a crowd of 40 attended, and the agenda was packed with an impressive lineup.

We were very fortunate to have Mike Shalin and Dennis Boyd, known more famously as Oil Can Boyd — a player we have been wanting to meet for many years, and we thank Mike Shalin for bringing him to the meeting. We had scheduled him to speak for 30-45 minutes, but who can stop The Can once he gets going, and he spoke nonstop for twice that long, and he held the audience rapt with his stories of growing up with baseball in Meridien, Mississippi, his arrival in Boston, his many great stories of playing professional baseball, and in particular his deeply emotional attachment to the game.

After The Can, SABR member Jose Ramirez, author of the award-winning Cuba and the ‘Last’ Baseball Season, told of the end of professional baseball on the island, as well as his own personal journey from Cuba to the United States. We highly recommend his book that tells many of the lost stories of the players, some who came to the United States and others who remained there.

Saul Wisnia, author of Son of Havana about Luis Tiant, spoke about the uniform number 23 that was worn by El Tiante, and also quizzed us about who else has worn that number on a Red Sox uniform. One notable player was Alex Cora. And yes, Oil Can Boyd also ”inherited” that number from El Tiante.

After the buffet, we were still up for some thought-provoking, memorable, surprising stories about baseball. We had been hearing stories about the Moonlight Graham Society and Evan Katz had approached us about bringing the society to our attention, and we are very glad he has. The Moonlight Graham Society, established on July 2, 2018 at McCoy Stadium, Pawtucket, RI, “celebrates the extremely short minor league careers of its members and rejoices in telling the creative pursuit of a life’s dream.” The three current members — Evan Katz, John Choe, and Dave Gilbertson told their amazing stories about how all three had signed one-day contracts with independent league teams. It is one of those situations where — you had to be there to hear this great stuff! And luckily, you have another chance as their stories are available at https://www.moonlightgrahamsociety.com.

I urge everyone to take a look and a listen and celebrate their creative pursuit of life’s greatest baseball dream.

Waiting patiently in the wings, Karen Stephens presented a short video, Hitting Home — based on the true story of the 1937 McKay Pals, a team of Italian American boys from East Boston who beat unlikely odds on their way to winning a championship game in Fenway Park. Karen’s father was a member of that team. Her story was an inspiring tale of an unlikely team of boys who won their way up to the ultimate field of dreams. As Oil Can Boyd had so eloquently told of the influence of baseball on his youth so was Hitting Home also a story of how baseball impacted the lives of young men just before the out break of World War II and what baseball meant to them, just as it had for Boyd. Her video was also loaded with a wonderful collection of photographs of East Boston in 1937, as well as interviews with family members and with the one surviving player from the McKay Pals.

There were many new faces at the meeting this year. We do hope all of them will be back for our next gathering, wherever it might be, but we expect we’ll return to Fenway Johnnie’s in the future. It also seems that a 4 PM start time had not intimidated anyone. Therefore, we forge on with renewed vigor and hope in our hearts for more baseball as we wait ’til next year.

Courtesy of Dixie Tourangeau, view a photo gallery from the meeting below or click here to view the gallery on Flickr.com.