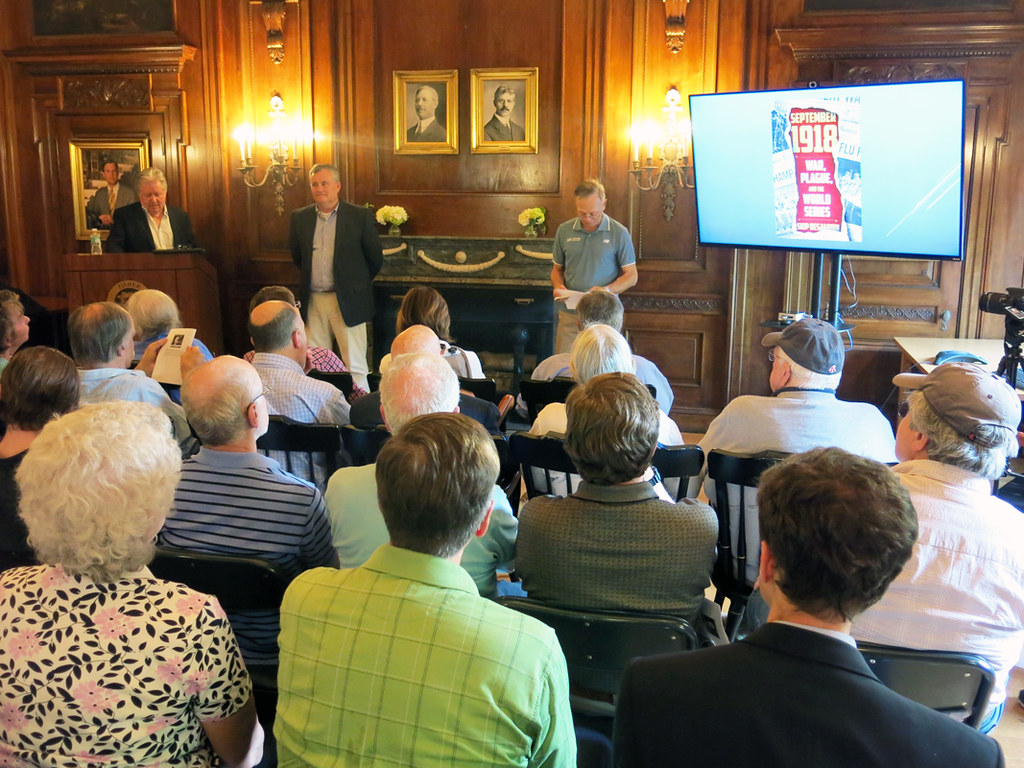 On Monday, May 21, 2018, SABR Boston Chapter members joined with members of several other Boston-Back Bay history groups and the BoSox Club for a fine evening of hot dogs and baseball. The National Historical Landmark Gibson House Museum (Beacon Street) hosted its seventh annual Baseball-Boston history night which has become an anticipated Spring tradition. Luckily the weather cooperated and it was a stunning and comfortable 75-degree evening for munching on hots dogs and having cold drinks in the House’s cozy “backyard.” More than 40 people took part.

Then came a short walk across Beacon Street to a Fisher College lecture room for a “fireside chat” book discussion led by 35-year sportswriter and current Red Sox historian Gordon Edes and 30-year media veteran Skip Desjardin (now with Google Fiber TV Projects), author of “September 1918: War, Plague, and the World Series.” For more than an hour Gordon prompted Skip with questions covering the book’s highlights, adding anecdotes and inside baseball trivia to Desjardin’s giving the audience various chapter teasers from his new publication. It was the season of Babe Ruth’s becoming a noted clouter, much to the consternation of manager Ed Barrow. The Plague was the lethal Spanish Flu, which had a high degree of connection to the shortened baseball season, September’s Cub-Sox World Series and the ending of World War I. Plenty of good questions and answers followed along with several pieces of complementary information coming from the attentive crowd.

View a photo gallery of the meeting below, courtesy of Dixie Tourangeau (or click here to view on mobile devices):