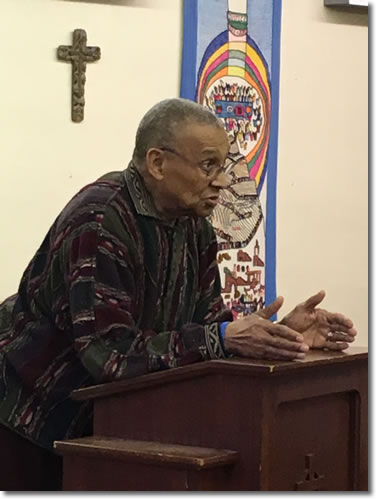 The attendance at a SABR Halsey Hall Chapter meeting exceeded 40 for the first time at the spring meeting April 9, 2016, in Minneapolis.

He played for the Twins in 1961 and then settled down in Minneapolis and worked for Dayton’s for many years. Julio was a guest at the 1988 SABR convention in Minneapolis and has stayed involved with the Twins. He is a coach at the Twins’ fantasy camp, which has had Lloyd Kepple are a regular attendee. Lloyd invited Julio to come to our meeting.

During the business meeting, Brent Heutmaker, Jerry Janzen, and Gene Gomes were elected to two-year terms on the chapter’s board of directors.

In addition, a silent auction held during the meeting raised $551 for the chapter.

For more information on the Halsey Hall Chapter, click here.