The Jack Graney Chapter (Cleveland) and Hank Gowdy Chapter (Columbus) had a very enjoyable, well received joint meeting on Sunday, May 5, 2019, at Canal Park, home of the Akron RubberDucks, in Akron, Ohio. The RubberDucks are the Class AA affiliate of the Cleveland Indians. The SABR members and guests enjoyed some great speakers who had a variety of interesting baseball stories to share with the 30 plus attendees. 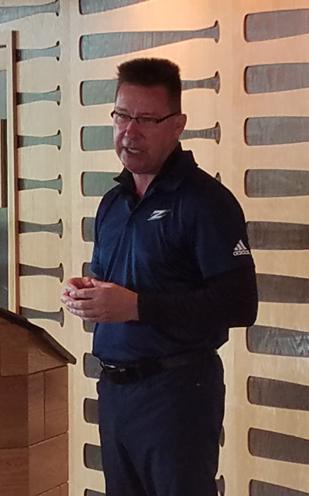 Chris Sabo, former major-league infielder with the Cincinnati Reds, Baltimore Orioles, Chicago White Sox, and St. Louis Cardinals told the crowd how he is rebuilding the University of Akron’s baseball team as head coach. Akron has not had a baseball team since 2015 and will resume play in the Mid America conference in 2020, so Sabo is rebuilding the team from scratch.

In addition he told some interesting stories about his MLB career, which included being NL Rookie of the Year in 1988, and a key member of the Reds’ world championship team of 1990. He related what it was like to play for both Pete Rose and Lou Piniella who served as Reds’ managers during his years with the team. He also recounted the first time he faced Nolan Ryan when the Ryan Express pitched for the Houston Astros.

Those in attendance were also treated to some great Cleveland Indians’ storytelling from two regional authors who talked about their recently published books. Jim Clark, play by play announcer for the RubberDucks, talked about his book Rally ‘Round Cleveland-The Story of the 1974 Franchise-Saving Cleveland Indians and included in his stories was the infamous June 4 ten cent beer night game against the Texas Rangers managed by Billy Martin, a game that will never be forgotten by Tribe fans.

Scott Longert recounted some of the trials and tribulations of the 1937-1941 Indians taken from his book Bad Boys, Bad Times. Scott’s stories included the attempt by some members of the team to get manager Oscar Vitt fired and the team getting the nickname “the crybabies.”

RubberDucks owner Ken Babby was also kind enough to break from his hectic game day schedule to stop by an offer his welcome. After the joint chapter meeting and a networking lunch, SABR members and guests enjoyed a double header with the RubberDucks taking on the Reading Fightin’ Phils. Unfortunately, the RubberDucks dropped both games of the doubleheader, but nevertheless it was a great day at the ballpark.