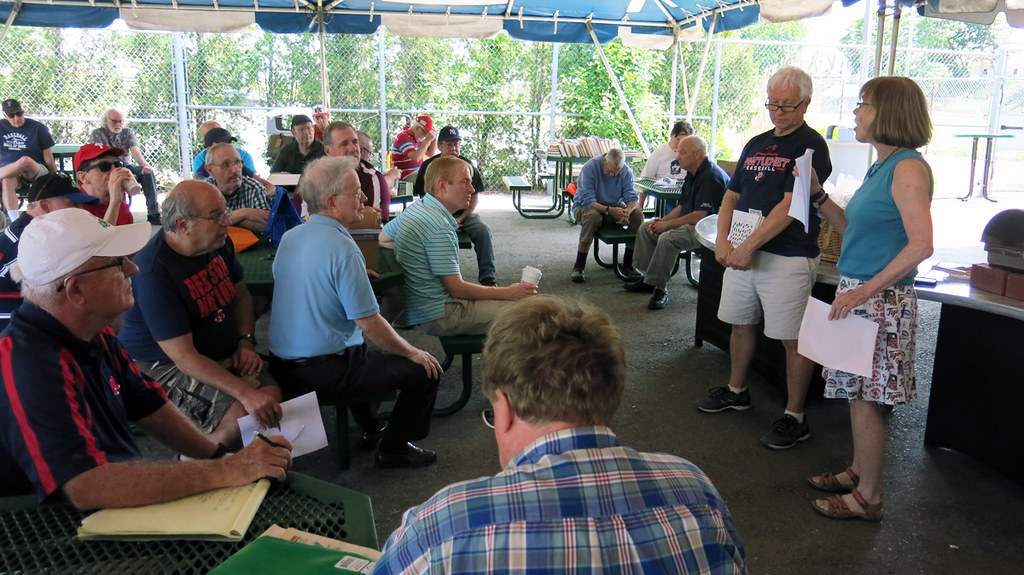 All last week the skies over McCoy Stadium in Pawtucket were dark and threatening, but on Saturday, June 9, 2018, it seemed OK to believe that God is a SABR member. The day’s weather was clear and warm (mid-70s) for the Lajoie-Start Southern New England Chapter’s annual meeting under a tent beyond right field in the ballpark.

The event had a slight gridiron tinge: The guest speaker was Upton Bell, a Boston area sports talk show host whose career also includes a stint as an executive of the Baltimore Colts and GM of the New England Patriots. Bell, whose father, the late Bert Bell, was a onetime commissioner of the NFL, had plenty of baseball anecdotes to please the 42 SABR members and guests in attendance.

Kevin Boles, the manager of the Pawtucket Red Sox, and Rich Gedman, the team’s hitting coach, stopped by and answered questions from the group.

The day’s program also included presentations by four chapter members: Mark Kanter on the Phillies and Pirates; Joanne Hulbert and Jay Hurd on the planned new publication SABR Arts Journal; and David Kaiser on an example from his new book “Baseball Greatness: Top Players and Teams According to Wins Above Average, 1901-2017.”

The chapter’s next meeting is scheduled for November 24, the Saturday after Thanksgiving, at St. Philip’s Parish Center, Greenville, Rhode Island. The guest speaker list is not settled yet, but we hope to have some representatives of the Cape Cod League on hand.

Click here to view a photo gallery of the meeting, courtesy of Dixie Tourangeau.