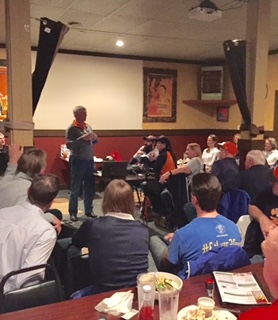 The Larry Dierker SABR Chapter had a big turnout at our monthly meeting on Monday, January 15, 2018, at the Spaghetti Western restaurant in Houston, with 40 members and friends including new member Scott Barzilla who also provided our trivia quiz. Thanks, Scott.

Since we were unable to participate in the Astros FanFest last Saturday, Mike McCroskey volunteered to look into venues for a local SABR Day activity on January 27. Details to follow.

Our first speaker was Jim Breazeale, a former player with the Atlanta Braves and Chicago White Sox. Jim, a local Houstonian, was originally drafted out of high school in the first round of the 1968 draft (8th overall.) He discussed his 11-year professional career from backing up Henry Aaron at first base for Atlanta and hitting a home run off Larry Dierker in spring training — Larry was with us at the meeting — to managing and playing in the minor leagues. He, as most former players, had lots of great stories to tell.

Next came Lisa Carter, a content producer for KHOU/Channel 11 television in Houston, who had the unique experience of covering the 2017 World Series for her station, which she shared through photographs. A lifelong Astros fan, she worked from a social media perspective and had complete access to the clubhouse and ballpark. Her presentation was terrific.

Bill Brown then reported on his new book, “Houston’s Team, Houston’s Title: The 2017 World Champion Astros,” which was very well received. He sold his inventory and graciously autographed each copy.

Since Spring Training is fast approaching, we watched a documentary “The First Boys of Summer” which focused on Hot Springs, Arkansas, and the many teams and personalities who trained there starting in the late 1800s using the hot mineral springs and other recreational activities available. They even got in some baseball.

Robert Beck repeated as the trivia winner, having won two of the last three contests.

Our leadership team studying the chapter’s organizational structure and responsibilities will meet next on Thursday, January 25 at 11:30 AM at the Spaghetti Western Restaurant and we welcome suggestions from all members.

The next monthly meeting will be on Monday, February 19.