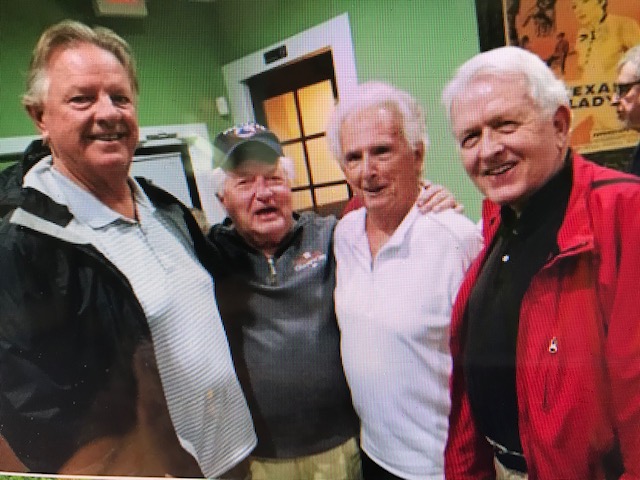 Members of Houston’s Larry Dierker Chapter gathered at the Spaghetti Western restaurant on Shepherd Drive on the evening of Monday, November 18, 2019, for spirited conversation, an interesting presentation, and an entertaining film.

Chairman Bob Dorrill opened the meeting with a reminder that annual SABR dues for 2020 are due in December. He also reminded us that 10% of any donations made to the SABR General Fund will be remanded to our chapter. Bob reported that our vintage baseball team, the Houston Babies, performed earlier in the month for a large and appreciative crowd at a George Ranch Historical Park event. The game was dedicated to the memory of our late member, Bill McCurdy, who was key to the development of this team. Bill’s son Casey threw out the first pitch in his father’s honor.

The evening’s first presentation was by Tal Smith. He outlined the structure and process of arbitration in preparation for the mock arbitration sessions scheduled for our January 2020 meeting. The arbitration process originated in the 1970s and Tal was actively involved in those negotiations for several years. Both club and player submit their desired dollar amounts in January. In the next 30 days, the matter may be settled by mutual agreement or it may proceed to the actual meeting of both sides with an arbitration team. Hearings are generally four hours or more with each side having time to present its case and each side having time for rebuttal. In the preparatory stage there’s an exchange of briefs and exhibits. Professional deportment is expected from all participants. The arbitrators listen to both sides, review the respective submissions and presentations, and usually render a binding decision for a one-year contract within 24 hours.

At our January meeting, chapter volunteers, representing both owners and players, will attempt to replicate the process. It should be both challenging and fun!

The latter part of the meeting was a showing of the film The Battered Bastards of Baseball. This film told the story of the Portland (Oregon) Mavericks, an independent team founded and led by actor Bing Russell in the mid 1970s. A variety of people who had been involved with the team (managers, players, other employees, the community, and the press) conveyed their memories of this quite unusual part of baseball history.